Last week, prices for top 10 cryptos registered impressive gains after fears of government regulation subsided. This week, they performed a sharp reversal. The overall market capitalization for cryptocurrencies fell to $440.6 billion at 20:49 UTC Friday from $507.3 billion at the start of this week.

The week started off with optimistically enough with the price of a single bitcoin propelling past the $11,000 mark Monday morning. But the rally was short-lived. Bitcoin prices plunged below $10,000 by mid-week. 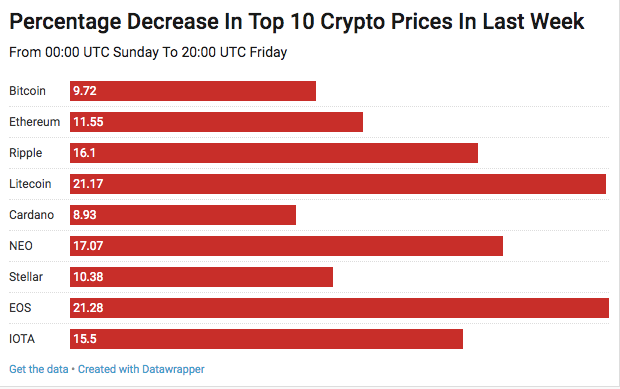 A Week Of Mostly Positive News

It is difficult to identify a pertinent reason for the funk in crypto prices as cryptocurrency news was mostly positive this week.

Governments and regulatory agencies around the world have begun the process of investigating crypto markets to put regulations in place. Ordinarily, this would be cause for apprehension and selling among traders. But crypto businesses and exchanges have welcomed the move since it removes roadblocks from the flow of institutional money into virtual currency ecosystems.

To that end, crypto exchanges are also getting their act together and forming self-regulatory organizations. Initial Coin Offerings (ICOs), which had come under a cloud after SEC chairman Jay Clayton urged caution at a recent Congressional hearing, are thriving, according to the latest statistics from Token Data. (See also: What Crackdown? ICOs Have Raised Almost $2 Billion This Year.)

Regulators have responded in kind. For example, the chief of South Korea’s financial regulatory agency said they will allow “normal” transactions at exchanges and encourage banks to make crypto-related transactions.

Even the SEC came out with guidelines for investing in digital currencies. “Proceed with caution, do your research, evaluate your financial goals and most importantly, don’t flip a coin when you’re making investment decisions,” the agency wrote.

At the same time, it charged a former bitcoin exchange operator as proof of its intention to weed out bad actors from the system. (See also: SEC Charges Former Bitcoin Operator With Fraud.)

Among other cryptocurrencies, Ripple continued its run of partnership announcements and released two new papers that detail plans to augment its crypto network. Several banking institutions around the world have already committed to testing its technology, but the role of XRP in these tests is unclear.

Tezos, a coin that was embroiled in a governance dispute between its founders and its board, resolved its problems and is set to use the $232 million it raised during an ICO last year to develop its ecosystem.

Meanwhile, Litecoin was the biggest gainer last week. This week, it shed those gains, and the debut of Litecoin Cash, an unauthorized fork from its blockchain, left investors unimpressed.

What To Expect Next Week

Apart from more news on the regulation front, traders have the chance to invest in a new coin. Bitcoin Private released its whitepaper this week. The cryptocurrency marries ZClassic’s encryption with bitcoin’s blockchain. The first blocks will be generated on February 28, and the main blockchain is expected to follow two days later.

Investing in cryptocurrencies and other Initial Coin Offerings (“ICOs”) is highly risky and speculative, and this article is not a recommendation by Investopedia or the writer to invest in cryptocurrencies or other ICOs. Since each individual’s situation is unique, a qualified professional should always be consulted before making any financial decisions. Investopedia makes no representations or warranties as to the accuracy or timeliness of the information contained herein. As of the date this article was written, the author owns small amounts of bitcoin.