If a retail trader wants to control ROI from his or her portfolio, then the quickest and most effective way is to look at the holdings of institutional investors. Smart money leans towards high ROI and assets with untapped potential. Following in the footsteps of MicroStrategy, Galaxy Digital, and Square, a retail trader may consider accumulating Bitcoin. 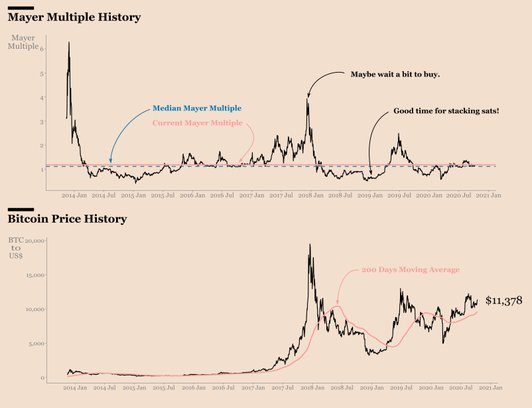 This historically low value indicates that it is the best time to accumulate Bitcoin. However, Bitcoin has gained 32% since the third halving and the price is currently $3000 higher than the fair value. The question remains, is this truly the best time to accumulate? The past week was largely bullish with an uptick of 6.6% in the price in 7 days. Though Bitcoin’s dominance remained the same, Bitcoin’s market capitalization has increased by $14 Trillion in the past week alone.

The current price is 35% higher than the fair value and the steadily climbing open interest by institutions on CME indicates that the price may increase further. Looking at a single ratio or chart may not be our best bet.

For a retail trader, a half-baked insight into Bitcoin’s price movement may sabotage a crucial position and pile on losses.

Do you read the market before making a trade? A few charts that give in-depth insights on Bitcoin’s price action are Map of spent Bitcoins and Moving Profits and losses.

Based on data from Whalemaps, the highest percentage of Bitcoin sold in the past 24 hours was purchased in Q1 of 2020 at $4.4k-$9.3k level. HODLers from November 2017, sold their Bitcoin at $2000-$2500 profit, and few others booked losses in the order of $4-$6k. The key insight here is that HODLers who purchased above $9k booked losses, rather than waiting for the pump that crypto Twitter is excited about.

Currently, based on the Moving Profits and Losses chart from Whalemap, profits booked are nearly 2 times higher than losses. The situation has flipped from where we started at the beginning of 2020.

Currently, 89% of HODLers are sitting on unrealized profits. Though this may be a good time to book those unrealized profits, it may not be the best time to buy/ accumulate. You may not be able to beat those who bought Bitcoin at $200 in 2013, you may be able to beat the ones who buy above $11k. First mover advantage does not necessarily come to the ones who’ve persevered from the first day, it comes to those who know when to enter/exit/ HODL.

The insight from the two most relevant and recent charts is different from Mayer Multiple. This may not be the best time to accumulate, however, if you are sitting on unrealized profits, you may want to sell.