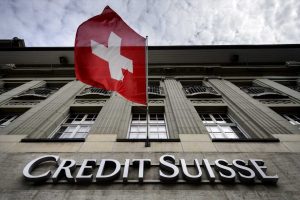 Credit Suisse on Tuesday announced several high-level staff departures and proposed a cut to its dividend as it weighs heavy losses from the Archegos Capital saga.

"Particularly following the significant US-based hedge fund matter, the Board of Directors is amending its proposal on the distribution of dividends and withdrawing its proposals on variable compensation of the Executive Board," the Swiss lender said in a trading update.

Investment Bank CEO Brian Chin and Chief Risk and Compliance Officer Lara Warner will step down from their roles with immediate effect, the bank said.

Last week, Credit Suisse revealed that it was expecting heavy losses in the wake of the meltdown of U.S. hedge fund Archegos Capital. The bank was forced to dump a significant amount of stock to sever its ties to the troubled family office, and now expects a first-quarter pre-tax loss of around 900 million Swiss francs ($960.4 million).

"This includes a charge of CHF 4.4 billion in respect of the failure by a US-based hedge fund to meet its margin commitments as we announced on March 29, 2021," Credit Suisse added.

The executive board has also waived its bonuses for the 2020 financial year, the bank announced, with Chairman Urs Rohner giving up his "chair fee" of 1.5 million Swiss francs.

At its AGM on April 30, Credit Suisse will now propose a dividend of 0.10 Swiss francs gross per share along with the amended compensation report.

Last month, the bank announced a shakeup of its asset management business and a suspension of bonuses as it looked to contain the damage from the collapse of British supply chain finance firm Greensill Capital.

The Board has launched two separate investigations, to be carried out by third parties, into the Greensill and Archegos sagas, vowing to "not only focus on the direct issues arising from each of them, but also reflect on the broader consequences and lessons learned."

Joachim Oechslin has been appointed interim chief risk officer and Thomas Grotzer interim global head of compliance as of Tuesday. All three will report to CEO Thomas Gottstein.

"The significant loss in our Prime Services business relating to the failure of a U.S.-based hedge fund is unacceptable," Gottstein said in a statement.

"In combination with the recent issues around the supply chain finance funds, I recognize that these cases have caused significant concern amongst all our stakeholders. Together with the Board of Directors, we are fully committed to addressing these situations. Serious lessons will be learned."

This is a developing story and will be updated shortly.