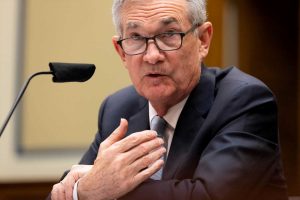 Federal Reserve Chairman Jerome Powell is tasked this week with convincing Congress that the ultra-easy policies the central bank has followed during the pandemic are still the right ones.

It might not be such an easy task this time around.

While Powell's parleys with Congress have been notably genial affairs, there's at least a chance this time around that the questioning could get a little pointed. Some in congressional leadership, particularly on the Republican side, have pushed the Fed to start easing its foot off the policy pedal, specifically pertaining to the at least $120 billion a month in bond purchases still in play.

Powell, then, will have to show that a rapidly improving economy that is contending with its highest inflationary pressures in well over a decade still needs crisis-level policies to pull it through.

"The last time he spoke [on June 22] was in front of the House financial services committee. That was a complete waste of time," said Peter Boockvar, chief investment officer at Bleakley Advisory Group. "Not many people challenge him. That's the problem with these testimonies and congressional appearances."

Indeed, Powell only occasionally faces a tough question or two when appearing on Capitol Hill, as he will Wednesday and Thursday when he delivers his mandated semiannual testimony on the state of monetary policy.

The Fed's response to the Covid-19 crisis last year, in which it wheeled out an unprecedented set of tools to combat upset in the markets and tumult in the economy, generally received high grades in Congress.

But things are changing.

Inflation expectations on the rise

The economy is just about back to its pre-Covid self at least in terms of GDP, the stock market has continued to soar, and inflation is motoring higher. A consumer survey Monday from the New York Fed indicated that inflation expectations are the highest they've been in at least eight years, and that has come amid a continuing surge in housing prices that has sparked bubble fears.

"I'm hoping he gets asked a question about housing," Boockvar said. "Housing is obviously the most rate-sensitive part of the economy and thus most directly influenced by monetary policy."

If things go according to past exchanges between Powell and Congress, he likely would then say the Fed is watching the housing market closely for signs of overheating, but doesn't see any yet.

Still, the sentiment of those on the policymaking Federal Open Market Committee is shifting.

At the June meeting, the group pulled forward the first post-crisis rate hikes to 2023, and was only one member's "dot" away from bringing a move into next year, which the market already is pricing. Some itchy trigger fingers on the FOMC could make Powell's task more challenging.

"It's definitely tricky now for them," said Tom Graff, Brown Advisory's head of fixed income. "They can't know how much current inflation is transitory. Some definitely is transitory, but some isn't. Therefore, they have to be careful about how much they promise. They can't afford to be overly specific about how long they may be willing to leave policy so accommodative."

More recent Fed document releases show a central bank without a great deal of certainty about the future path of inflation specifically and the economy generally.

Minutes from June's meeting were filled with equivocation about how FOMC members viewed the road ahead. A report Powell will present along with his testimony, released Friday, noted that "upside risks to the inflation outlook in the near term have increased" even if policymakers are holding to their belief that they eventually will fade.

Along with that, the Powell Fed has put high emphasis on the employment side of its dual mandate. Under its current mission statement, the central bank is looking for a return to employment that is both full and inclusive of racial, gender and income. While the unemployment rate is well below its Covid peak, the current 5.9% level is still considerably above the 3.5% pre-crisis rate.

Powell's "level of confidence that the labor market will make 'substantial further progress' could be a clue to his level of support for an earlier start to tapering" of the monthly asset purchases, wrote Citigroup economist Andrew Hollenhorst.

Boockvar said he hopes, but does not expect, that Powell will provide some clear path to the exit from the current level of policy support.

"It's overkill. Policy that was fine a year ago is not fine now, and in fact you can argue that they ran it too hot," Boockvar said. "A classic too much money chasing too few goods is in play here. We don't have a demand problem, we have a supply problem."