Home » Business » 'He was given the lifetime suspension because fundamentally he was a bully': US Tour de France team boss reflects on former friend and teammate Lance Armstrong, who 20 years ago this month won his first Tour

'He was given the lifetime suspension because fundamentally he was a bully': US Tour de France team boss reflects on former friend and teammate Lance Armstrong, who 20 years ago this month won his first Tour

Everyone knows the incredible story: He beat cancer and came back to win the preeminent bicycle race a record seven times in a row. He started a cancer foundation. He earned millions. He dated celebrities and became a celebrity.

And eventually it all fell apart.

He lied about his cheating.He attacked his critics.He tried to ruin people’s careers. Instead of being contrite he was vindictive.

TheUS Anti-Doping Agency said Armstrong ran the most sophisticated doping program in the history of sports. He was barred for life from cycling.

Read more: Where are they now? The Lance Armstrong team that dominated the Tour de France

After years of denial,Armstrong finally admitted to Oprah Winfrey on live prime-time TV that he doped not only in his first Tour victory but also in the six that followed.

“He was bigger than the sport — he was truly a global icon,”Jonathan Vaughters told Business Insider this week when asked about his former friend and teammate, two decades to the month after their lives began to take starkly different paths.

Vaughters was a member of Armstrong’s 1999 Tour-winning team before crashing out of the race. Now he’s the CEO of the openly anti-dopingEF Education First team competing in the Tour.

He just publishedhis first book, an autobiography that covers his years coming up as a bike racer, racing through the sport’s rampant doping — including under Armstrong’s reign — and his second career as a team boss. 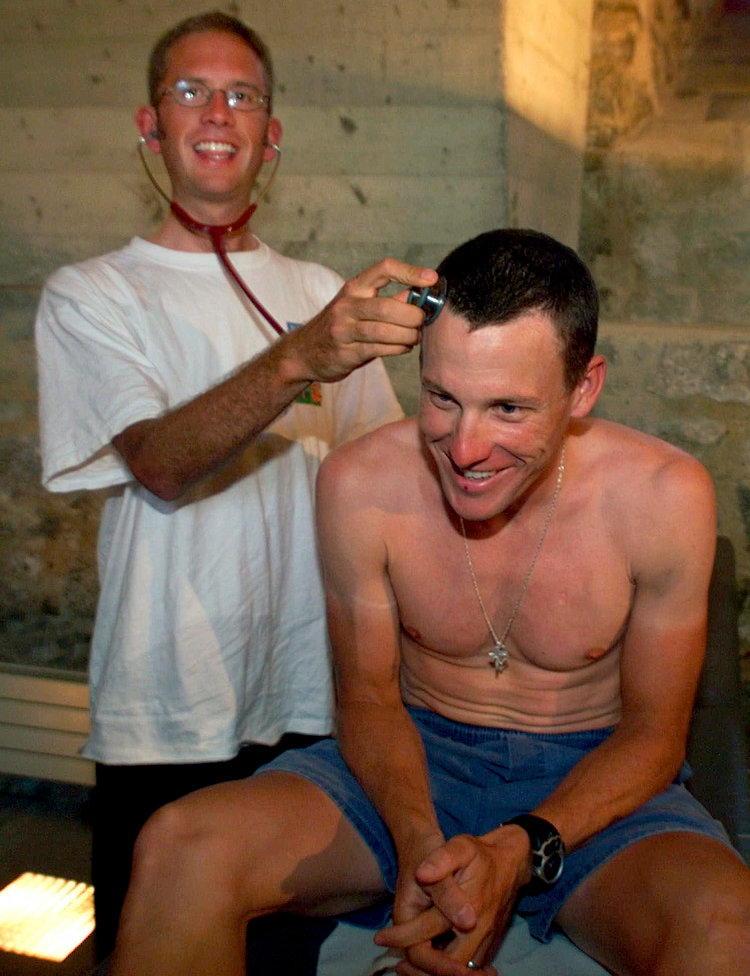 Vaughters and Armstrong before the start of the 1999 Tour.AP Photo/Michel Spingler

Vaughters admitted his own doping in 2012 in The New York Times. He’s more recently been outspoken against cheating and built a top team dedicated to clean racing.

“As far as the book goes, Lance was a character, a friend,” Vaughters said. “I don’t know — not a close friend. And then a nemesis in a lot of ways, over the years. He’s certainly a character in the book, without a doubt, but by no stretch of the imagination is the book about him. He’s just someone who’s played a very large role in my life, and obviously a very large role in cycling.”

Though many know about Armstrong’s rise and fall, years later there’s one question that sill comes up: If everyone else doped, why was Armstrong singled out and why were his Tour titles taken away?

“A lot of people have questioned whether he was actually that talented,” Vaughters said. “Lance was incredibly talented and incredibly strong. He was a very gifted athlete, both physically and psychologically, mentally. As far as the doping goes, did he receive a harsher penalty than everyone else? Of course he did. It was harsher than everyone else.

Armstrong was in fact given the opportunity to assist USADA in helping to dismantle the pervasive culture of doping in the sport, but Armstrong rejected the offer, and, according to Vaughters, “turned it into this personal thing and chose not to assist them and then tried to spin it around and make a narrative that it was all against him.”

Read more: Inside the decision that led the best-placed American to stop racing in the Tour

“He has consistently chosen to really bully people throughout his career and use his position of power and his influence to twist the truth,” Vaughters said. “He wasn’t given a lifetime suspension and no one else because of the doping, because he was a bigger figure. He was given the lifetime suspension because fundamentally he was a bully, and eventually that was a backlash on him. Maybebully isn’t in theWADA regulations, but it’s in the rules of life.”

“It’s not that he wasn’t an incredibly gifted athlete with or without doping — he was incredible,” Vaughters said. “I don’t know if he would win seven Tour de Frances. I don’t know about that.”

Armstrong attacked USADA as recently as 2016, saying it went after him only because it needed a case and a story.

Last year he settled a $100 million fraud suit from the federal government for $5 million. He now has a podcast andcomments on the Tour.