Tesla's market value is up more than 1,000% since the electric-car maker first sold stock in 2010.

While Tesla has performed well overall, any individual stock can over- or underperform and past returns do not predict future results. 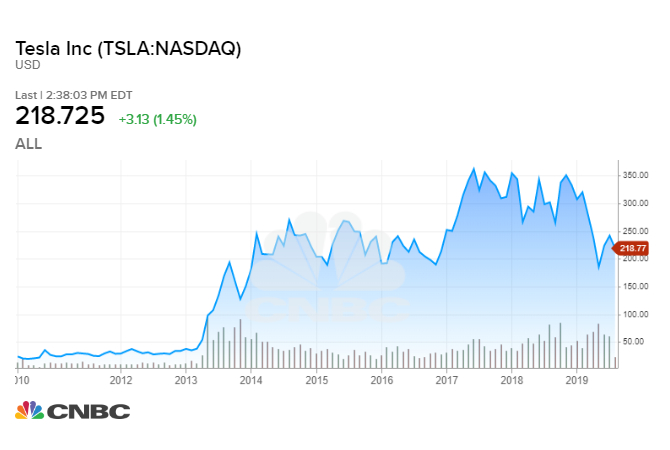 On the same day, Musk also published a letter on Tesla's website explaining his thinking."Basically, I'm trying to accomplish an outcome where Tesla can operate at its best, free from as much distraction and short-term thinking as possible, and where there is as little change for all of our investors, including all of our employees, as possible," he wrote in the letter, which was also sent to Tesla employees.

After the take-private tweets, Musk faced fraud charges from the SEC. The financial regulator alleged his claims that he had"funding secured," were false and misleading. Musk and Tesla reached a first, then a revised, settlement agreement with the SEC over the offending tweets. As a result of the settlement, Musk and Tesla each paid a $20 million fine, and Musk was forced to resign from his chairman role on Tesla's board.

While Tesla's stock price has suffered over the past year, its CEO is seeing success in other areas of business. In May 2019, investors close to the latest round of funding for SpaceX, which is Musk's other company, told CNBC that it was now valued at $33.3 billion. Since the start of 2019, the space company has raised more than $1 billion in fresh funding, and in August, it successfully launched its Falcon 9 rocket.

This spring, it was even reported that SpaceX's private worth had surpassed Tesla's market capitalization, which at that time, had fallen to $32.8 billion. While Tesla has a massive market cap, the company has never managed to be profitable for a full year, which is why it's not on the S&P 500.

Currently, Tesla's market cap has perked back up and sits around $40 billion.

Despite Tesla's recent travails, it notched a record quarter for electric vehicle sales in its last quarter with 95,200 deliveries to customers then.

Musk tweeted on July 29, 2019, about reviving Tesla's solar panel business, saying the company aims to manufacture around 1,000 solar roofs per week by the end of the year. He followed up with tweets on Aug. 18, 2019, that customers in some states can rent residential solar rooftop systems. These tweets came before news that Walmart is suing Tesla after solar panels atop seven of the retailer's stores allegedly caught fire, according to a court filing, CNBC reported Tuesday afternoon.

If you are thinking about getting into investing, experts often advise starting with index funds, which hold every stock in an index, such as the S&P 500. Seasoned investor Warren Buffett agrees that it's a smart idea to start with index funds, in part because they fluctuate with the market, making them less risky than individually selected stocks.

Here's a snapshot of how the markets look now.