Home » Business » Putin has no clear options in Belarus

Putin has no clear options in Belarus

Russian President Vladimir Putin has no clear options in Belarus, where daily protests and nationwide strikes are threatening the rule of longtime autocrat President Alexander Lukashenko.

Demonstrations erupted last week after Lukashenko's office declared him the winner of this months' presidential election, which critics — as well as the EU and UK — have condemned as fraudulent and rigged.

A series of nationwide strikes began on Monday, with workers at a state-run booing Lukashenko and a state TV channel broadcasting footage of an empty news anchor desk as employees go on strike.

On Monday, Lukashenko was visibly shocked as he arrived at a state-owned factory outside Minsk to what is probably the first hostile, jeering crowd he has ever encountered in his 26 years of authoritarian rule.

As he proclaimed that there would be no further elections until "you kill me," workers booed and chanted "Go away!" until he left the stage.

Sunday's anti-regime rally was also the largest in the country's history:

Over the weekend, Lukashenko publicly reached out to Putin for support as protests in Belarus continued to swell. Putin said that Belarus was being subject to foreign pressure and gave a vague offer to help.

The desperate call for help came after years of tense relationship between the two leaders over Lukashenko's willingness to play Russia against the EU to maintain Belarusian independence from Moscow.

But three NATO intelligence officials — one from a Baltic state, one from Central Europe, and the other from Western Europe — all agree that Putin's next move remains unclear. All three officials refused to be identified for security and political reasons, but their identities are known to Insider.

All three said that Putin is unlikely to commit to a specific course of action until protests further develop and Lukashenko's grip on power is clearer, but outlined these three choices facing Putin:

Military invasions of Russia's neighbors — like Georgia in 2008 and Ukraine in 2014 — are always a possibility with Putin, but all three officials said that they suspect this move would pose too many domestic political risks to be the immediate reaction.

"It's a tailor-made situation for Putin in many ways as he knows what he wants: to keep Belarus out of NATO's orbit and close to Russia," said the Western European intelligence official.

"But in other ways that don't have much to do with Lukashenko himself. There are risks in that a military invasion or overt crackdown might backfire politically for Putin."

"He's got a restive population himself that has tired of his autocratic rule, so the visuals of Russians pouring in to stamp out a revolution against a guy he doesn't particularly like or need might backfire, considering so far nothing about the uprising against Lukashenko has been directed at its relationship with Russia." 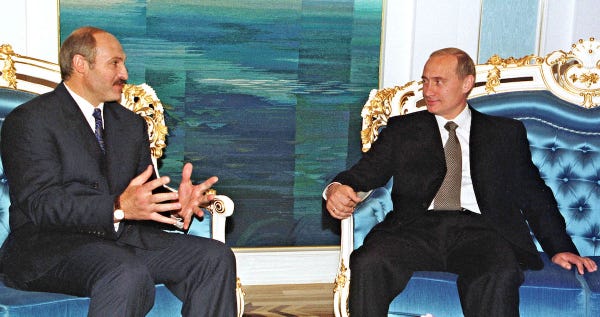 Belarusian President Alexander Lukashenko and Russian Prime Minister Vladimir Putin meet in Minsk, Belarus, on September 8, 1999. Both men have been in power for decades.Reuters

2. Weakening the protesters — which could help Putin replace Lukashenko

Putin's sending increased security assistance and intelligence operations to splinter or disrupt the opposition is an almost immediate certainty, all three officials said.

Each described scenarios in which Russian intelligence would help identify and neutralize key organizers and opposition members in a much more subtle way that Belarus has seen thus far.

This would give Putin direct lines of influence and communications with both the regime and the opposition, allowing him time to calculate his next move, and either protect Lukashenko or allow him to be removed in favor of another government that will work closely with Putin.

"Putin has a strong interest in the future direction of Belarus but he's too smart and ruthless to really care if Lukashenko is the one who does it for him," said the Baltic official.

"What's important to him is a Belarus that is a good neighbor with close ties and no interest in joining NATO."

The Kremlin on Sunday reported that Putin told Lukashenko that Belarus was subject to foreign pressure, and offered to send military assistance to help Lukashenko if necessary. However, the offer was vague, leaving the extent of Russia's involvement unclear.

All three officials agreed that Putin has thus far seemed content to watch and wait to see how things further develop before committing to a course of action that cannot be easily undone, like an overt security involvement or invasion.

"We will know more in a few days about the extent of the promised security and intelligence cooperation but right now, if you look at Putin's statement, he spoke of protecting Belarus from outside assaults but didn't spend much time supporting Lukashenko himself," said the Baltic official.

"Putin hates being locked in to anything," the Western European official added. "I expect he will continue to vaguely support the current government and reduce the power of the uprising but he's going to try and leave himself as much room to work with whatever comes next in Belarus."

"Putin tends to lay out how he sees a situation — in retrospect, the invasions of Georgia and Ukraine should not have come as a shock because he'd been quite clear about how he saw these situations — but so far he has been very vague."

"I suspect this is less a case of him being deceptive — I mean, there's always some of that with him — but more of a situation where he's still deciding what is happening and how to make it work out well for him. And for Russia of course."

However, the intelligence officials noted that Putin may very well have developed a specific plan to address the crisis and Russia's actions in the coming days could define that plan further.

"We just don't have great visibility on how Putin might immediately react in Belarus," said the Central European intelligence officer.

"This is more of a domestic political situation that many people realize that [Putin] is concerned about what any changes mean for his domestic politics and security on Russia's Western border. His thinking will likely not account much for the EU, UK or international community."