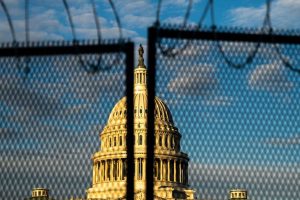 The US Capitol was put into a precautionary lockdown Monday morning following an "external security threat," the US Capitol Police said in a statement.

"All buildings within the Capitol Complex: External security threat, no entry or exit is permitted, stay away from exterior windows, doors. If outside seek cover," a message sent to people inside the building read, multiple outlets reported.

People who were in the West Front of the US Capitol building were evacuated, according to multiple social-media reports.

"In an abundance of caution following an external security threat under the bridge on I-295 at First and F Streets, SE, Acting Chief Pittman ordered a shutdown of the Capitol Complex," US Capitol Police said in a statement. "There are currently no fires on or within the Capitol campus."

The statement said that members of Congress and their staff were told to shelter in place while authorities investigated the situation.

The alert was promoted by a fire at a nearby homeless encampment, a law enforcement official told NBC News. Videos of smoke not far from the Capitol complex circulated across social media Monday morning.

The alert came as security at the complex has been increased to unprecedented levels ahead of President-elect Joe Biden's inauguration on Wednesday. A group of pro-Trump rioters stormed the Capitol on January 6 while lawmakers were inside, prompting the unprecedented security measures.

This is a developing story. Check back for updates.