Home » Business » This Is the Oldest House For Sale in America

This Is the Oldest House For Sale in America 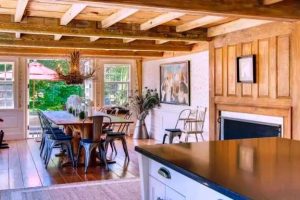 The median age of an American home is 37 years. That means a huge number were built in the 21st century. Occasionally, a home built over two centuries ago comes on the market. Most of the oldest homes in America, those are built before the Revolutionary War, are found in the 13 original states, and in particular the northeast. These were the most populated areas in the United States at that time.

The oldest home for sale in America today is at 5 Stillpoint Meadows Road, West Tisbury, Massachusetts. Built in 1714, it sits on three acres adjacent to Priester Pond. West Tisbury is located on Martha’s Vineyard, which is off the east coast of Massachusetts. The house is on the market for $3.3 million. This price should come as no surprise. Many wealthy people from New York City and Boston summer on the island. In fact, there is a dispute between the year-round residents and those who are seasonal about the summer surge in population. Full-time residents say that the trends have pushed home prices out of reach.

The house at 5 Stillpoint Meadows Road is called the Luce Athearn House. The inside of the house is fairly rustic, with exposed beams and stone fireplaces. It has five bedrooms and four bathrooms. Much of it was “modernized” in 2018, although it is not clear from the listing what that means. This is part of the description in the listing:

Approached by a granite stone walled pathway one enters the 5 bedroom Cape via the original doorway into the renovated modern kitchen, with high end appliances throughout. The dining room with wood paneled fireplace, original floors, Gun stock posts and original beams.

The town of West Tisbury has a population of 2,418, according to the Census Bureau, though it rises very sharply in the summer. The town covers 25 square miles, with the north and south end touching the water that surrounds Martha’s Vineyard. The median household income is $95,351, nearly $30,000 above the national number. Probably, that figure is higher in the summer, although the Census Bureau does not measure that. The poverty rate is a very low 6%.

Click here to read about the richest county in every state.