Home » Business » Why Walmart is cutting prices on certain items

Why Walmart is cutting prices on certain items 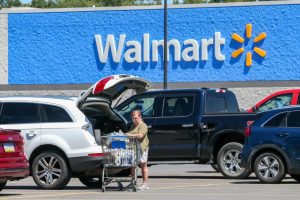 New York (CNN Business)Walmart on Tuesday offered a much rosier picture for consumer spending than it had forecast just a month earlier, as the company’s steep discounts led customers to shop more at stores.

Sales were up 9%, excluding the impact of the change in exchange rates, last quarter.
Walmart recently announced it would cut prices on some non-essential goods, such as clothing and some big-ticket items due to an excess of inventory from that shift in spending. That led Walmart last month to slash its profit outlook, warning that inflationary pressures forced consumers to spend more on essentials, such as food, and less on discretionary purchases.

The company said it got a good customer response from those price cuts last quarter. Although Walmart continues to expect earnings will fall in the second half of the year, it now predicts a smaller drop in profit going forward than it had previously expected. Earnings per share for the year are expected to drop 8% to 10%, excluding divestitures, but that’s better than the 10% to 12% drop it forecast on July 25.

He said the need to cut prices on items other than food had helped clear excess inventory, even if those price cuts and the shift in spending had put pressure on profit.
“We expect inflation to continue to influence the choices that families make, and we’re adjusting to that reality so we can help them more,” McMillon told analysts on a call with investors. “Regardless of the inflation level and as we work through the places we have too much inventory, we continue to make progress on our strategy.”

The company said general merchandise sales were soft, particularly in electronics, apparel and home goods.
Walmart isn’t only cutting prices, it’s cutting the goods it is purchasing to put on shelves.
“We’ve also canceled billions of dollars in orders to help align inventory levels with expected demand,” said CFO John David Rainey.
Sales at its US stores open at least a year rose 3%, excluding the spending on fuel. Walmart said it expects to see that same rate of growth in the second half of the year. 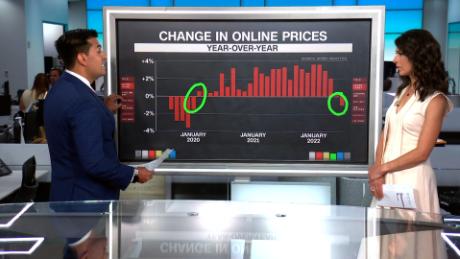 Since Walmart is the nation’s largest retailer, its results are watched not only as an indication of its own health, but the the strength of the US economy overall. The results Tuesday was another sign that, despite worrisome indicators of a possible recession in the months ahead, consumer spending, remains strong.
That’s probably because of continued strong job growth and increasing wages — and it’s good news for the broader economy, because consumer spending makes up nearly three-quarters of the nation’s economic activity.
Even with the solid results, the ability to forecast where the company’s sales, and the US economy overall, is difficult.
“The swings that we’ve seen in consumer behavior have been difficult to predict and the pace at which they’ve happened has been sharp,” said Rainey.
And one of the things that is helping sales, and the company doing better than it predicted only last month, is the recent decline in gasoline prices, which is leaving customers with more money to spend on other items.
“If you told us that fuel was going to continue to tick down and that food inflation was going to moderate, that influences how we think about general merchandise inventory,” said McMillion. “You don’t want to go into too much of a defensive mode.”
The mega retailer managed to outperform Wall Street’s profit expectations, despite inflation and changes to consumer spending habits.

The company reported adjusted earnings per share of $1.77, down only 1 cent from what it earned on that basis a year earlier. Analysts surveyed by Refinitiv had forecast earnings to fall to $1.62 a share.
Shares of Walmart (WMT) gained more than 3% in premarket trading on the news.
Source: Read Full Article