The Bank of Montreal has initiated blocking transaction of cryptocurrency on its credit and debit cards, as per the bank employee who posted the document on Reddit.

The Bank of Montreal, a Canadian multinational banking, and financial service corporation, operating as BMO Financial Group banned its customers for participating in cryptocurrency transactions.

A Reddit user claiming an employee of the bank has disclosed an internal document (Ops Bulletin #632 dated March 28, 2018).  Bank employee uploaded the below screenshots in cryptocurrency subreddit. 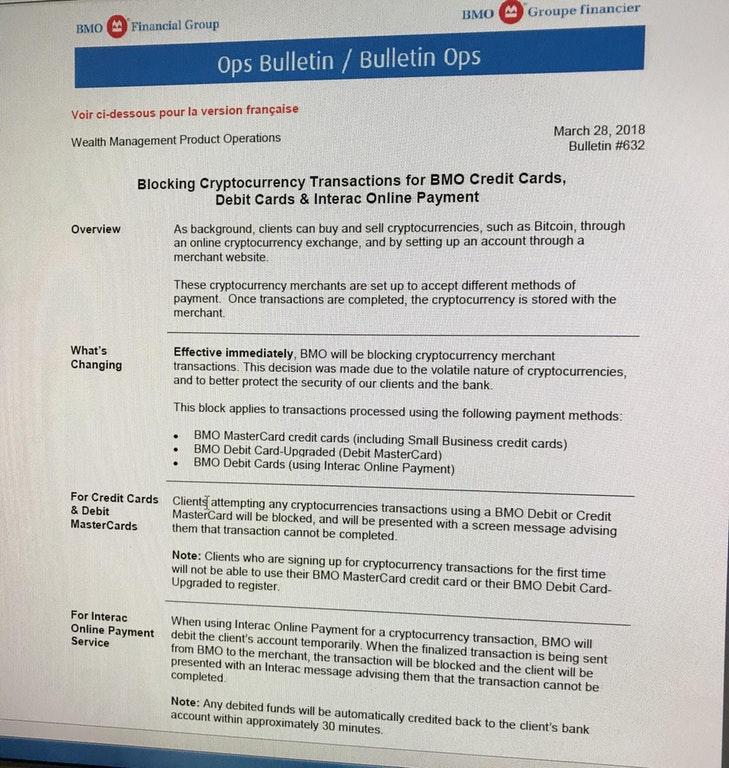 According to the screenshot posted on Reddit, titled “Blockchain Cryptocurrency Transactions for BMO Credit Cards, Debit Cards, and Intrac Online Payment,” the ban is effective straight away.

It describes that BMO will be prohibiting cryptocurrency merchant transactions. It is imprecise that if the bank had any intention of informing its users about their transactions will be blocked. Hence, it is only mentioned when users will process any cryptocurrency transaction they will be displayed with a simple message. The message will advise them that the “transaction cannot be completed”

Hence, banning of cryptocurrencies is because of its volatility nature. As per the BMO bank statement

“This decision was arrived at because of the volatile nature if cryptocurrencies. And also to protect the security of our clients and also protection of the bank.”

Fascinatingly, it was reported that the same bank recently approving to offer banking services to a new brokerage platform that will be handling cryptocurrencies like Bitcoin and Ethereum. The platform was introduced by TMX Group, the operator of the Toronto Stock Exchange and myriad Canadian financial companies. These include, TSX Venture Exchange, the Montreal Exchange, the Canadian Depository for Securities and the Canadian Derivatives Clearing Corporation.

Similarly, decisions have been taken by Banks of America. The decision prohibits the buying of cryptocurrencies using credit cards. However, some infamous monetary organizations like UK-Barclays have revolutionized their minds.