On 27th September, Trust Wallet, a mobile Ethereum Cryptocurrency announced on Twitter that it has released support for VeChain [VET] and VeChain Thor [VTHO]. The wallet has also disclosed the integration of Wanchain [WAN] to its platform. 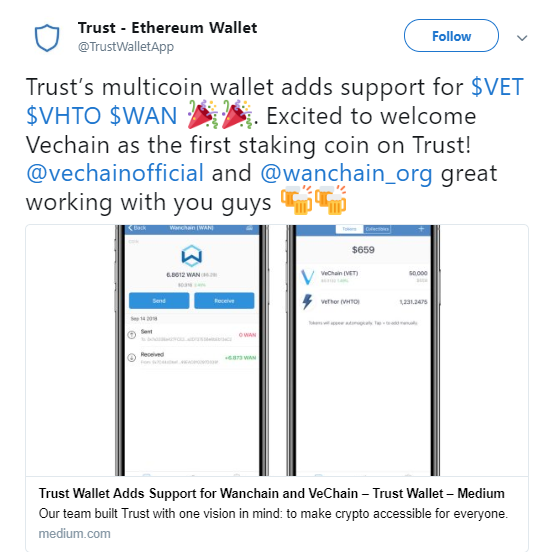 Trust Wallet was recently acquired by cryptocurrency exchange, Binance with an aim to provide better services and enhanced safety and security to users. Trust wallet has retained its anonymity post the acquisition and therefore users will have access to both the VeChain and Wanchain currencies via Trust’s multi-coin wallet on iOS and Android devices.

The wallet is a decentralized application [dApp] that is open source and anonymous with support for ERC20, ERC223, and ERC721 tokens including digital assets such as Ethereum [ETH], Ethereum Classic [ETC], and GoChain [GO]. Changpeng Zhao aka CZ, the CEO of Binance stated:

“One of the best mobile wallet for your crypto just got better!  BUIDL!”

Trust Wallet has also announced that they plan to add support for Bitcoin [BTC], Tron [TRX] and NEO in the following year.

“Goes out of his way to note Vechain is first staking coin supported. It is quite noteworthy in and of itself.”

“But for now that wallet support just ETH and ETH tokens. Binance buys this wallet and now the first coin on its own network is VeChain. I think this is one of a kind of support.”

“It is a free world. Each person can choose where they want to live or conduct their business at Binance should operate in a country that has regulations that support crypto. I guess this is why so many other blockchain companies are moving to Malta.”