Home » Crypto » CoinGeek NYC sponsor spotlight on nChain: Are you ready for Kensei?

CoinGeek NYC sponsor spotlight on nChain: Are you ready for Kensei? 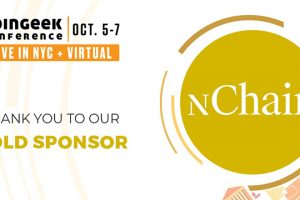 With the CoinGeek Conference New York right around the corner, CoinGeek caught up with Dominic Duffy from event sponsor nChain. The conversation centered around the work of nChain in recent months, as well as their plans for the conference and beyond.

As a long-time sponsor of CoinGeek Conferences and avowed supporters of the emerging global BSV community, nChain is no stranger to the conference stage. The interview began by asking Duffy what nChain had been working on since the last CoinGeek Conference in Zurich, Switzerland, where nChain announced it would be launching its own platform, Kensei.

Duffy described Kensei as being uniquely suited to enterprise clients, as it is built upon the scalable BSV blockchain.

“Well, it essentially is the interface between developers who want to take advantage of blockchain, and the blockchain itself; It removes the complexities that would otherwise be associated with writing, retrieving, and referencing data to and from blockchain.”

He addd, “It’s aimed very much at developers that understand the inherent benefits of blockchain. So, the BSV community will definitely be able to leverage. And we are planning on presenting it at CoinGeek New York specifically for that purpose.”

Asked about what nChain has in store for presenting at the conference, Duffy said he would be joined by Kensei’s architect Andy Mee to discuss the platform, and the latest layer of functionality being rolled out for the platform.

“We’ve been hard at work readying the next iteration of Kensei, and I’m very excited to announce I’ll be introducing Kensei, and its next layer of functionality alongside Andy Mee, the architect of the platform, at CoinGeek in New York,” Duffy said.

From the conference in New York, Duffy said he hoped to convey nChain’s vision to the audience, of a world that can trust the veracity and accuracy of the data it relies upon, with the help of Kensei and other supporting tools: “Well, if we’re able to have conveyed to a proportion of the audience that:

Duffy said nChain had conducted research into data integrity in different industries, including finance and insurance sectors, which found data integrity to be a significant concern—something readily addressed by nChain’s new platform, with the help of BSV blockchain.

“We’ve done some research ourselves around the level of data integrity in many different industries, but most strikingly, the research was done with Frost & Sullivan recently highlights that over 50% of finance and insurance organizations have little faith in the data that they provide for audit. In fact, over 50% believe that they have anomalous or erroneous data that they’re using to audit.”

On BSV itself, Duffy said the technology was already showing itself to be superior to others in providing the right infrastructure for enterprise-level apps.

“BSV is making great strides. Right from the number of transactions being processed through to the sustainability of the platform. It’s showing itself to be head and shoulders above the pretenders. And we’re very excited to actually see those developments and hear about those developments specifically at the conference.”

Catch Dominic Duffy and Andy Mee on Day 2 of the CoinGeek Conference in New York City, when they will present “Kensei: The Gateway to the Definitive Blockchain”; while Sales Director Nick Hill is set to join the Day 1 panel on “Blockchain Solutions for Responsible Gaming Compliance.” nChain Chief Scientist Dr. Craig Wright and nChain CTO Steve Shadders will be on hand as well during the three-day event to talk about the key updates in the BSV network.