Even since the dawn of algorithmic trading in the FX market, the day of the SNB crisis, a little over three years ago has been the most memorable one for many market participants. The shock observed across CHF pairs and the EUR/CHF and the USD/CHF, in particular, has been the subject of a study by the Bank of England’s research team.

Experts from the British central bank have been tasked to find out whether there was any party that has been aware of the prospects for the SNB to remove the floor from under the EUR/CHF 1.20 rate.

As it turns out, the four experts that conducted the study on part of the Bank of England didn’t find evidence of market manipulation. What they did find out, however, was that during the day and the following days, the lack of algorithmic trading produced a number of arbitrage opportunities on the market, which are typically not present nowadays.

By studying a detailed set of data from EBS Markets, the team from the Bank of England set out to explore what happened on SNB day and why did the market tank as much as it did in the aftermath of the removal of the floor by the Swiss central bank.

During the day of the most significant shock to the global FX market in modern times, algorithmic trading was a major contributor to the sudden drop lower in the EUR/CHF and the USD/CHF. This primarily happened thanks to the withdrawal of automated trading mechanisms which resulted in the disappearance of liquidity from the market.

In the aftermath of the SNB’s announcement, human traders took over and were the main actors in finding the efficient price of the market. At the same time, the algorithms greatly amplified the trends in subsequent hours and days. Algorithms used by banks were the main contributors to EUR/CHF volatility, while trade aggregators exacerbated the moves.

A significant outcome of the event was the conclusion that algorithms did not play a contagion role, as the rest of the FX market didn’t follow on the moves in CHF pairs.

In the run up to the announcement from the SNB, seconds before the release of the official announcement that the SNB will not be selling an unlimited amount of Swiss francs on the open market, the central bank started removing its sell orders from the market. It took the market a whopping 44 seconds to start swiftly acting to price in the significance of the communique from Thomas Jordan and Co.

EUR bids disappeared at the minute after the announcement and both sides of the book collapsed in size.

During the 30 minutes in the aftermath of the SNB’s announcement, the algorithms of major banks consumed liquidity at extreme prices. As a result, the Bank of England’s paper states that about 75 percent of the appreciation of the Swiss currency in the 20 minutes to 09:50 GMT was attributable to the algorithmic interfaces of major banks. 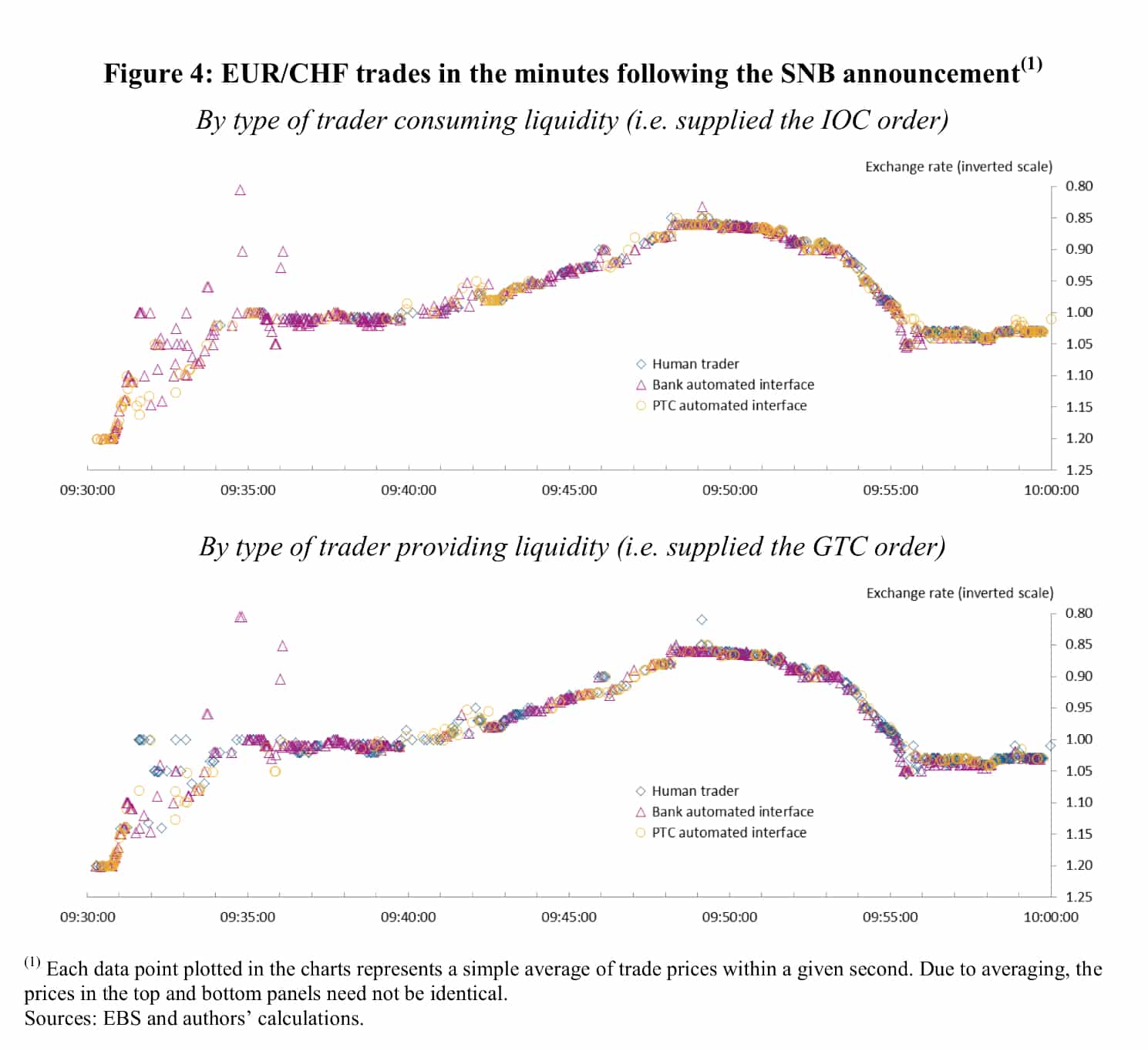 Net liquidity provision by algorithmic interfaces fell on the day of the event and in the following days, while human trading picked up. The increases of human trading activity were significant, pointing towards a market that is materially different than usual. From 54.1 percent in the period leading to the event, the participation of major banks’ algos as market makers dropped to 25.1 percent on the day of the event and to 35.3 percent in the aftermath.

During the same period, human traders were the main liquidity providers. From 38.8 percent on the days before the SNB crisis, the roles were switched dramatically. On the day when the CHF market broke, human traders provided 68.4 percent of the liquidity, a figure that dropped to about 50 percent in the following days.

The slow reaction of major trading desks to the event is a key catalyst to the blowup of many hedge funds that were using algorithmic trading strategies. The exit door for them was virtually slammed shut as the automated liquidity provision mechanisms detected the irregularities on the market and pulled out of the risky market.

Lessons for the Industry

Black swan events are part of the financial markets and avoiding them remains a difficult task. What the industry took from the event was to never rely on a predetermined outcome. Brokers were much better prepared to handle the Brexit vote for example and this was all thanks to the experience that they got from the SNB crisis.

A number of algorithmic traders that have been relying on continuous liquidity provision on part of major banks were significantly affected by the event. Strategies that were relying on smooth exits from the short CHF trade were massively hit and negative balances have been difficult to collect for all brokers that chose to go after those.

Arguably, some of the new regulations that the ESMA is mulling over the retail FX marketplace are also a direct result from the SNB black swan. While there is no particular vernacular on how to act during such events, the industry is better prepared to handle such crises nowadays. The full 30 pages-long research paper by the Bank of England is available below.