This article is an excerpt and the second in a series of two. To read the first excerpt, click here. To listen to the full interview, click the Soundcloud or Youtube links.

Cryptocurrency has certainly made huge strides in the world’s technological and financial spheres since its advent several years ago.  Within the last year alone, the cryptocurrency movement transformed from a fringe hobby into a major global industry.

However, crypto still receives tons of criticism for being based so heavily on speculation–most cryptocoins still act solely as investments, and are not used in any practical way.

Recently, Finance Magnates spoke with Electroneum founder Richard Ells about how Electroneum is seeking to establish itself as a coin for practical use and as an industry standard.

Richard explained that Electroneum’s mobile miner gets tokens right into the hands of anyone who wants to be a part of the network: “we’re dribbling out about 35 to 45 million coins a month…we’re introducing people to cryptocurrency.”

But why is the Electroneum mobile platform more useful than other mobile wallets that have been designed for other coins, like Bitcoin and Ethereum? Richard said that Electroneum is targeting an entirely different group of people: “what the other mobile wallets are doing is taking somebody who already is familiar with Ethereum, and maybe already has some Ethereum, and they now want a more convenient way to access it.

Instead, “we’re taking somebody who’s got no idea about cryptocurrency at all, and giving them something that’s easy to access and easy to use. “

Of course, micropayments are rather impractical on Bitcoin and Ethereum–both for different reasons. “Nobody would micropay with Bitcoin, it’s far too expensive,” said Richard. “The huge value in Ethereum is its contract base.” 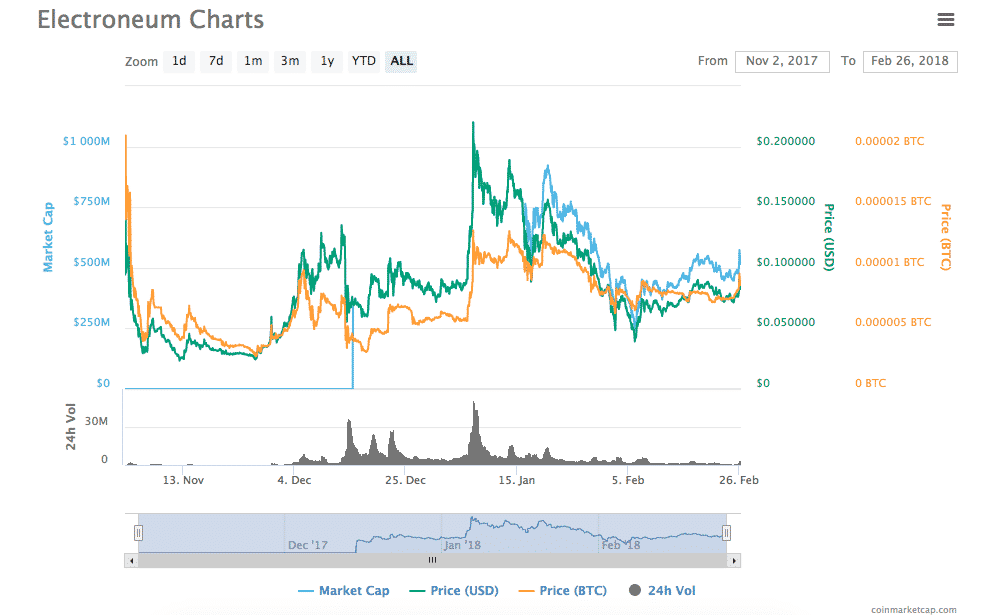 Richard explained that a single transaction on the Electroneum network costs 1/100th of an ETN token. “I think we’re at about $0.08 at the moment, so if you measure a hundreth of an eighth of a cent, it’s a really cheap fee… It’s more like about one half of a cent at its maximum transaction fee.”

Richard added that the fees are not dependent on the amount of the transaction: “Even if you’re transferring 100 pounds or 1000 pounds, that’s still the same amount per transfer fee, tiny in comparison to the PayPals and the Visas of this world. That’s one thing that’s exciting.”

Electroneum: the Year Ahead

“The biggest thing [over the next year is] just stabilizing everything in terms of getting all of our mobile miners,” said Richard. “I’ve got my fingers crossed for 10 million [mobile miners].”

Is that goal unreasonable? Well, “I really wanted to get one million users in the first year, and we’re a whiskers away from getting a million users, so I’m very confident that we’ll do that one, and ten million users–I think we can fly through it.”

In fact, Richard said that Electroneum “just signed an agreement for access to another 30 million handset owners. So getting access to these people should be pretty good, and trying to convince somebody to have an app that gives them something for free shouldn’t be too hard, so I’m confident that we’ll get those users.”

However, there are some logistical things to sort out: “just paying them–paying millions of people–getting millions of users onto the blockchain is quite a technical challenge in itself.”
Richard added that there are some promising technical developments underway from Electroneum over the next year: “I think the most exciting part from a ‘how we’re gonna change things point of view’, is that we’re developing a PayPal-style platform for vendors.

“We’re developing tokens for the majority of the large eCommerce platforms, to enable us to have a system where a vendor can log in and say, ‘yes, I’d like to accept your Electroneum,’ and it gives them all the tools they need to start accepting Electroneum on their eCommerce platform. That’s planned for this year, probably the 3rd or 4th quarter…But that’s something that’s in the planning stages [at the moment.]”

He explained that private keys on the Electroneum network are kept in cold storage in an offline database. Additionally, “all the workers that are actually picking up the jobs to do the transactions, they’re sitting on firewalled servers that cannot speak to the internet via the website.

RIchard added that the most secure way for users to store their ETN off the database is with a paper wallet, which can be found at ‘downloads.electroneum.com’.

What Does Electroneum Have On Its Competition?

Richard said that Electroneum is way ahead of the pack in terms of ‘where the rubber meets the road: “All [of the other cryptocurrencies] that are trying for mass adoption–when I’ve looked at them–they don’t seem to have any actual way of getting that mass adoption….except for the people that are trying to copy the exact same plan that we’re doing.”

“We’ve come quite a long way. So we’ve gained an awful lot of traction, there’s a lot of excitement out there for our project, which is partly exciting, partly slightly terrifying.”

Taking the Long View: Where Will Electroneum Be in Twenty Years?

Richard said that in twenty years, “I don’t think [Electroneum will] look anything like it does now.”

He continued: “I think all of the cryptocurrencies, all of us that are in the cryptocurrency current space, we’re all like the Wright brothers. We’ve got these hideous contraptions, that once they might fly, they might be a shadow of what cryptocurrency ends up being. We’re all inventing, we’re all bolting things on that are quite unattractive to try and solve problems. Once this whole market space becomes mature, the world is gonna look very different.”

Richard said that one thing that will guide Electroneum forward into the more distant future is its brand construction: “What we do have as a brand [is] this hybrid of centralized meets decentralized. We’ve got a fully decentralized blockchain, but we’ve got a centralized brand and app. You can use Electroneum without ever registering in the app, because you can download all the tools offline and do it.”

The most important thing, however, is Electroneum’s ease-of-access: “What makes it exciting is that we’ve got this simple app, and that’s where most of our users head. We’ve got about 890,000, or 850,000 users at least on there.”

The fact that Electroneum is so closely tied with mobile networks allows the users to be easily accessed by Electroneum (and perhaps other large entities): “Those users, we know who they are, so we can communicate with them…unlike Bitcoin that might have 10 million people, but nobody knows who they are. There’s no list of Bitcoin users.”

While the lack of anonymity may cause some users to shy away from Electroneum, Richard argues that it’s a very positive thing from a marketing standpoint: “Because we have a list, we actually have our user base that we can actually get our user base to grow with us, because of the hybrid that we’ve made.

“When the new Bitcoin comes out, you have to convince all those Bitcoin people to use it. You have to do that with marketing budget, or with talking to the press, or with trying to get your message out there. But it’s really difficult to talk to your whole community, which is why you’ve ended up with these Bitcoin forks.”

“Because we actually have this gigantic power of communication with our users, I think the Electroneum brand will still be around. Whether or not Electroneum’s lines of code that exist today will be around in 20 years, I think is perhaps debatable. But certainly, I think we’ve got a brand that can endure.”