In the midst of a pretty rocky time for most cryptocurrency platforms, IOTA has also taken quite a hit. Yet, IOTA has been making a lot of impressive announcements lately and it has slowly been on the rise again as a result.

With all of these recent developments coming to light, it’s looking like IOTA is going to be making some very big achievements this year, and there are no signs they’ll be slowing down any time soon. Let’s dive right in and see what IOTA has been up to lately.

Back in December 2017, Robert Bosch Venture Capital—the venture arm of Bosch—announced that they purchased a significant number of MIOTA tokens. It was also revealed that Hongquan Jiang, a partner at Robert Bosch, was joining IOTA’s advisory board. It was clear that IOTA and Bosch were partnering up to work on some big project. But what?

Then, on February 27, IOTA unveiled something huge via Twitter: 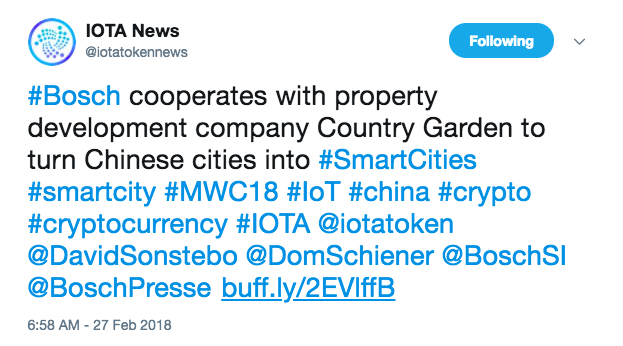 Strangely, the linked article was removed, as well as the tweet that went out from Bosch’s Twitter account. But the cat’s been let out of the bag—IOTA is going to help turn another city into a smart city! This is a really big deal, as it shows IOTA’s technology is more than just theoretical, it has real-world use cases that are going to transform entire cities.

IOTA is already in the process of turning Taipei, Taiwan into a smart city. This includes creating citizen ID cards on the Tangle technology that will eliminate risks of identity theft and voter fraud, while also providing a simple way to track health history and other data for government-related services. IOTA is also working on creating a palm-sized card with sensors that can detect light, temperature, humidity, and pollution levels, in order to provide Taipei’s citizens with up-to-date information about their environment.

It will be very interesting to see how IOTA works with Bosch to revolutionize cities in China. We’ll just have to wait until they release more information to see what their exact plans are.

It has also recently been announced that Volkswagen is joining ties with IOTA. In January, it became public that Volkswagen’s CDO, Johann Jungwirth, was now a part of IOTA Foundation’s advisory board. 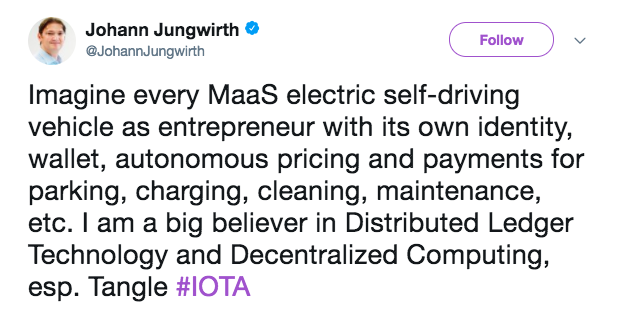 This means IOTA is working with Volkswagen to develop decentralized technology for connected smart cars. IOTA will probably be used at first to distribute Over The Air (OTA) software updates to vehicle computers in a secure, efficient, and wireless manner.

But, as Jungwirth states in his tweet, there’s a huge potential to utilize IOTA’s technology in really exciting ways for self-driving vehicles in the future. Imagine a smart car drives up to your house, automatically takes you to your destination, and instantly handles all payment and parking, without you having to do anything but sit back and relax. That’s exactly what IOTA and Volkswagen could end up doing, years down the road.

Upcoming Release of the Trinity Wallet 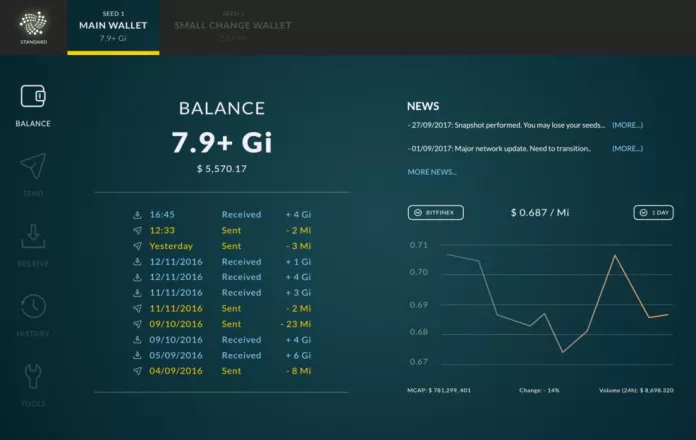 The long-anticipated Trinity Wallet is supposed to be released in the next month or so. IOTA’s current Light Wallet has had a slew of security issues that have resulted in some users losing their IOTA credits. The Trinity Wallet will have new and improved security features, such as 2-factor authentication, to ensure its users’ MIOTA will be more protected from theft. The Trinity Wallet will be a very user-friendly and intuitive wallet, aimed at increasing adoption among less tech-savvy users. There will be a desktop version as well as a version for iOS and Android phones.

The wallet is currently in alpha-testing mode to work out some bugs. But the IOTA team has stated that a beta version of the mobile wallet will be released to the public sometime this quarter. To enable transparency and community engagement, the Trinity Wallet’s code will be open source once it is released.

2018 has only just begun, yet IOTA has already made some impressive strides so far this year. With massive partnerships being made and a whole new wallet on the horizon, it’s looking like this is just the tip of the “IOTAberg.” Stay tuned for more news and updates regarding IOTA—the team surely has more advancements up their sleeve for improving and expanding the IOTA network.

What do you think IOTA will reveal next? Let us know in the comments.