In the cryptocurrency world, new projects appear every day. One such successful start-up is NEO, an open-source cryptocurrency with the extended functionality to develop smart contracts and decentralized applications (dApps).

Some of the biggest exchanges and start-ups in the crypto space were created by Chinese developers and NEO certainly ranks among them.

But what we can expect from NEO in the future?  Will the Neo price surge or plunge in 5 years?

NEO is a blockchain platform for the advancement of digital assets and smart contracts. The data chain about existing transactions is kept on different computers that are independent of each other. All operations conducted with the NEO cryptocurrency are checked by these data blocks, identifying the owner and transaction.

The project was launched by Da Hongfei back in 2014 and originally named AntShares before getting rebranded in 2017 as NEO. Today, it is one of the top cryptocurrencies out there with a large community behind it.

Neo coin is perhaps the most outstanding Chinese coin gracing the crypto markets lately. Although, within the last 24 hours, the top cryptocurrency made some shocking unexpected losses. The losses accrued amount to an insignificant 3%, its however unexpected due to the ongoing general season. 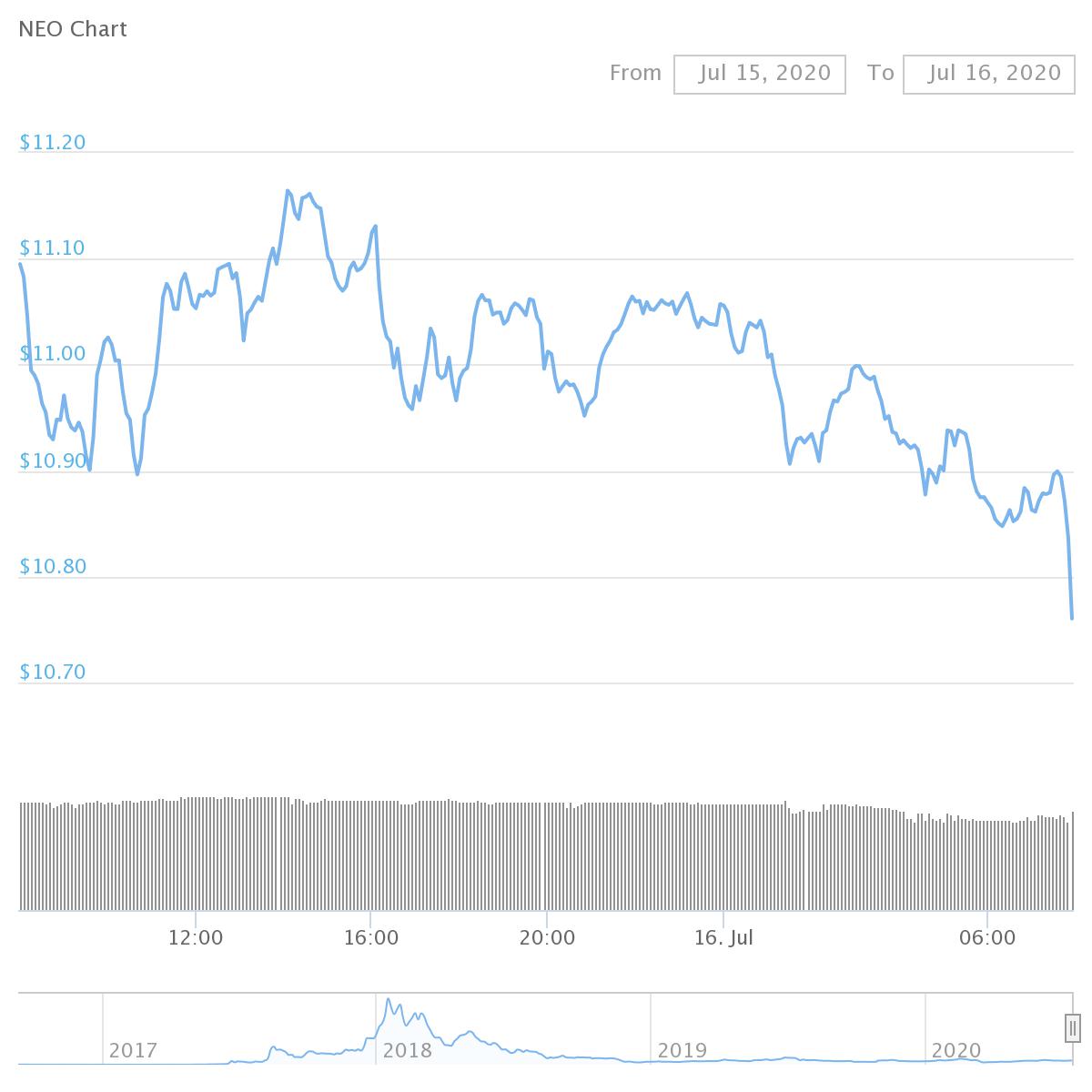 Neo coin lost 3% since the last day and presently trades at $10.71. Price change within the same period ranged from a bottom at $10.71 and a top price at around $11.20. Neo coin’s market capitalization steadies at $765 million while the average 24 hours exchange volume stands at $201 million. 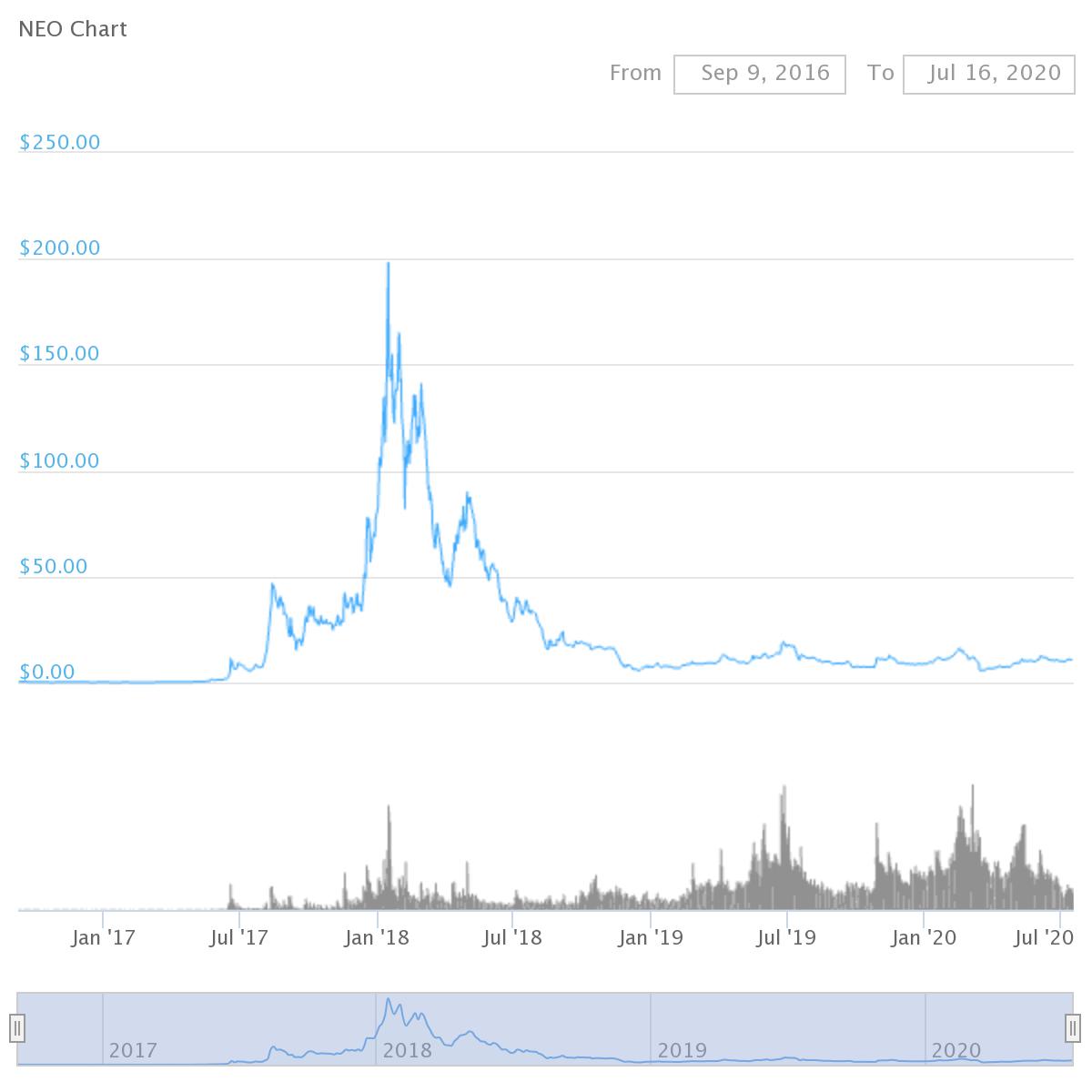 NEO was previously referred to as Antshares, so we will start our price analysis from the rebranding in 2017. The price of the coin soared from $1 to $7 as the company concluded the rebranding and became NEO. When it heard about the coin, the crypto community began aggressively purchasing NEO. The coin reached $40 in August and the NEO’s market capitalisation was $2 billion.

For several months NEO was traded between $20 and $40. Then in December 2017, it started growing rapidly, along with nearly all the other digital assets on the market. Beyond benefitting from the overall influx of buyers into the market at that time, the growth of NEO was boosted by it getting listed on Bithumb, the largest active crypto exchange at the time. As a result in mid-January, the coin reached its ATH –$196.

When the market turned bearish NEO started going down. In March 2018, the digital coin cost about $52 but it managed to return to $76 before falling back again to $40. April was the last month when NEO showed solid growth and reached $83. After that, the coin started gradually falling and by the end of 2018, NEO’s rate was $7.

In April 2019 when Bitcoin started growing again, NEO jumped from $9 to $12. Besides, NEO upgraded its algorithm to improve transaction speed and stability of the network. However, the update didn’t cause a significant effect on the market price of the coin. By the end of June, the coin reached $20 and then dropped to its price of $8. 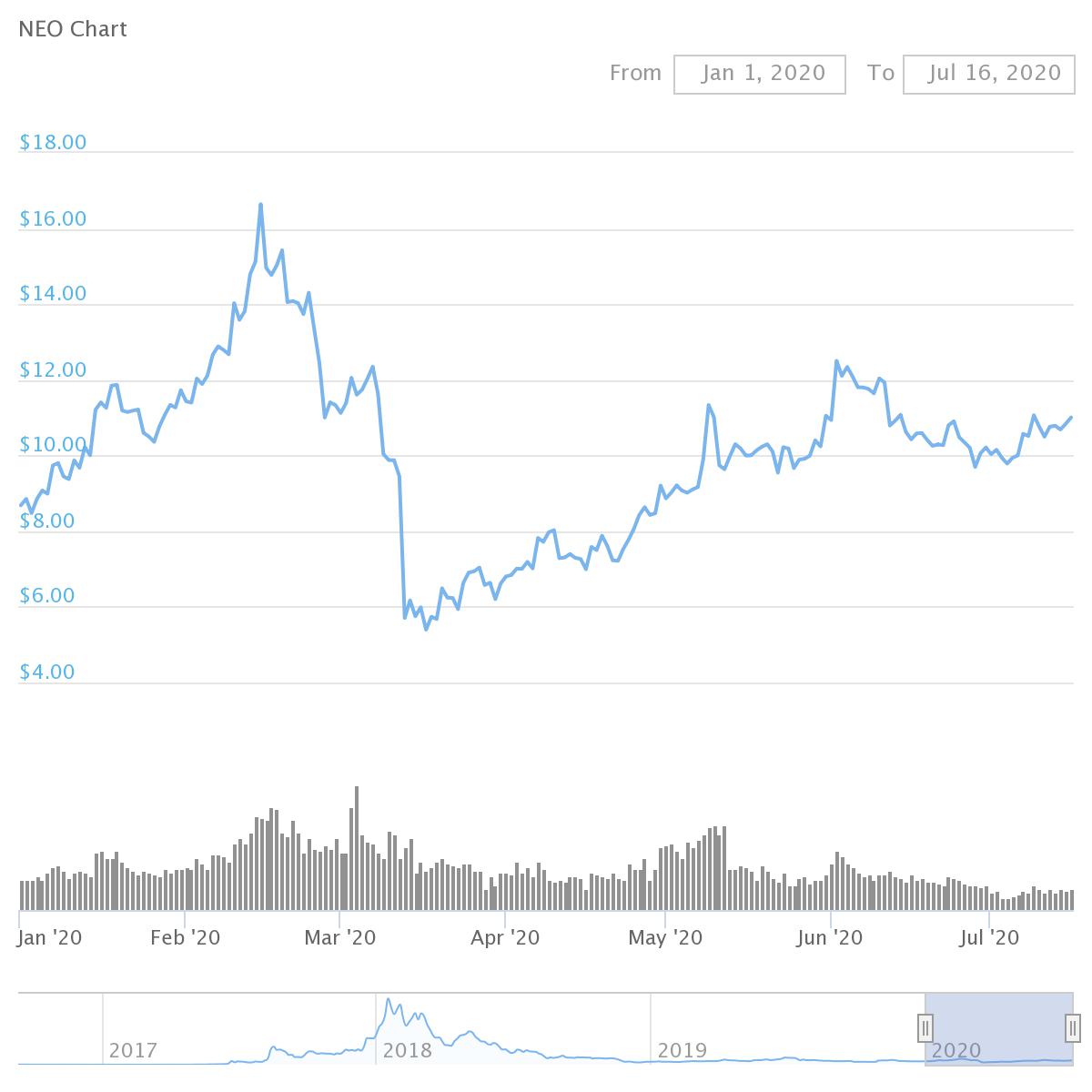 Neo coin prices in 2020 have a reasonably significant background. In quarter one (Q1) of 2020, they were once the highest performing set of cryptocurrencies and are now among the biggest cryptos seeing progress in the industry as of now.

The Neo prices in the year 2020 have been reasonably significant. In January, the price was about $8. Buying pressure, however, moved the Neo price higher and by mid-January the coin was trading about $17.

Neo coin rates collapsed at the end of the first quarter in March, tethering at around $5 by late March. In quarter one (Q1) of 2020, they were once the highest performing set of cryptocurrencies.

In Q2 2020, prices started to recover again. The Neo price moved rapidly, slowly and tentatively through Q2 to hit a peak price of $12.5 by the end of June. Neo saw a minor price dip since the beginning of July, pushing it down to the $10 corner. Alternate ups and downs coordinate the price into a sideways motion.

The Neo coin price forecast stands on the bullish side for the remainder of 2020. An aggregate of estimates indicates that from here, Neo is predicted to reach three times its size. The Neo coin price could be about $35 by December 2020.

Neo price is bullish for 2021. As it seems alt season resumed recently, Neo will continue its gains into 2021. By Mid 2021, Neo coin may be trading around $50 and by the end of the year, the top crypto would be changing hands around $70

Neo prices will experience a multiplicity of developments in coming years. By 2025, however, Neo coin is expected to be trading around $200, signifying a 2000% (x20) of its current price.

As the custom is, no one coin has a convergent opinion of price from market analysts. Neo coin price prediction is subjected to such uncertainties. However, the future price sentiments for Neo coin remains generally bullish.

Let us get a glimpse of the future of NEO by looking out the predictions given by the crypto traders or publications:

1) Being Crypto: Being Crypto predicts that NEO could reach $120 by the end of 2020, $200 by 2020, and as much as $450 in five years. Their confidence in the prediction shows that through their developments, NEO has the potential to surpass other coins.

2) Wallet Investor: Wallet Investor is a renowned website for crypto prediction, which has predicted that NEO could reach USD 30.381 by the end of 2020. They also presented a 5-year projection where they thought NEO could hit $103.70 in a time period of 5 years.

3) Long Forecast: It is believed that the price of NEO may depreciate in 2020 and may fall to around $9, according to the Long Forecast prediction. But, 2021 is hopeful and NEO could hit as high as $21 by the end of 2020, they expected.

5) CoinFan: CoinFan believes that NEO could reach a maximum of $200 by 2020, and it could increase to as much as $783 by 2021. This looks like an optimistic bullish prediction by Coin Fan

On Aug 20, 2020, Developers could soon build dapps to run on multiple blockchains without compromise thanks to new cross-chain protocols.

Developers could soon build dapps to run on multiple blockchains without compromise thanks to new cross-chain protocols.

Neo Releases $11 Million From Cold Wallet to Fund Itself Through 2020 https://t.co/Hrrq67A88T pic.twitter.com/I2bcqEl0WG

Neo is presently trading at $10.71. However, by December, Neo price is likely to grow to around $25.

This will not be soon. It may take around 7 to 10 years to achieve this.