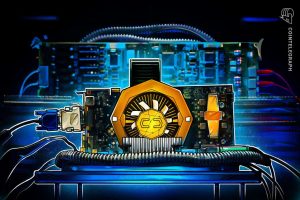 Although digital currencies have skyrocketed in value throughout the year, Nvidia has not made any significant profits from its cryptocurrency mining processor (CMP) line.

According to Nvidia’s third fiscal quarter report, the company’s CMP sales dropped by 60% sequentially in the most recent quarter, with sales of the product line expected to drop even further in the fourth quarter.

In its quarterly financial statement, Nvidia said CMP sales fell from $266 million in the second quarter to $105 million in Q3, which ended in October.

Nvidia claims to have made $526 million in revenue throughout the product’s existence, roughly 3% of the total revenue of $19.27 billion over the same period. The company’s overall income has been driven almost entirely by gaming, data center and professional visualization equipment sales.

Last quarter was no different in terms of CMP sales income. As reported by Cointelegraph, Nvidia surpassed Wall Street expectations by generating over $6.5 billion in profit. Still, it failed to meet its crypto-mining GPU line profitability target for the second quarter of 2021.

During the first-quarter earnings call, Nvidia CFO Colette Kress predicted a $400 million revenue for the company’s cryptocurrency mining processor line in Q2. In the second quarter, Nvidia sold CMPs worth $266 million, short of its goal by a one-third margin.

While CMP has yet to gain significant traction, Nvidia’s profits have not been harmed. Its value is up almost 123% this year. Overall sales were up 50% year over year, and $3.2 billion was generated in a single quarter by selling graphics cards to gamers and PC builders, according to the company’s earnings release on Wednesday.

Still, the firm claims it can’t be certain that its increasing sales of graphics cards aren’t linked to the cryptocurrency market. During a call with analysts on Wednesday, Kress said that: “Our GPUs are capable of crypto mining, though we don’t have visibility into how much this impacts our overall GPU demand.”