Ripple’s partners have been satisfied with the unique remittance solution offerings via xRapid [with XRP at its core] and xCurrent provided by the platform facilitating mainstream adoption. Different industries have dipped their toes into the crypto space for its payment facilities for a large volume of transactions.

Ripple has announced that RippleNet, in a matter of three years, has signed over 200 clients including many leading commercial banks in India, Korea, Japan, and around 9 Middle Eastern banks. Besides, Ripple has also managed to expand its foothold to major remittance corridors with the latest being the US to Mexico and the Philippines.

Eva Kaili, European Parliament, Chair Future of Science & Technology citing the edge that blockchain has in terms of cross-border money flow as opposed to the traditional financial institutions, stated:

“By its nature, doesn’t recognize borders. It’s unstoppable. We [want] to use it to connect Europe, remove barriers and give people the understanding that it can be used for good.”

The recent London Ripple Regional Conference witnessed the participation of many prominent figures from the industry.

Alastair Constance, the CEO of Mercury FX has remarked that xRapid is the future. An xRapid user platform, Mercury FX has successfully executed a transaction involving a huge amount of capital of around $4,552k from the UK to Mexico early in January this year. This is a significant example of the mainstream deployment of crypto.

“Ripple provides the opportunity for us to say we have opened up this market and we can come here and trade freely at the optimized speeds and costs.”

Navin Gupta, managing director for Ripple, South Asia, and MENA predicted 2019 to be conducive for crypto regulations for Asian countries steering towards leveraging digital assets. For scalability purposes, Ripple in its 2.0 version will focus on expanding its multi-hub model and stretching its services to the financial establishments in small frontier markets.

Talking about the unique offering by Ripple, Gupta said,

“It saves international banks from having a direct banking relationships with a multitude of countries in frontier markets.”

“Euro exim bank- a literal who – with no onshore banking license anywhere in the world- and people get excited about this?”

Tomas Snitka, Head of Operations of the digital remittance solution provider, TransferGo which announced its collaboration with Ripple on September last year, has reportedly applauded Ripple. 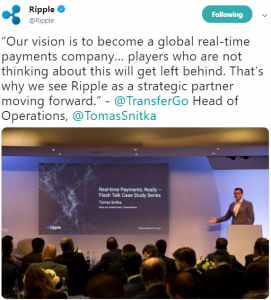