Many investors in Uniswap’s governance token, UNI, were hurt by the token’s crashing price. While UNI had peaked in early-September with a value of $8.59 within days of its launch, it could not hold onto this value and soon began its gradual descent on the charts. Further, the low volatility period in September was followed by a dump in October, one that pulled down UNI’s value all the way to $2.47.

In fact, according to many analysts, when the value of the crypto-asset fell close to an all-time low on 7 October, the said movement was due to its whales selling off their holdings. 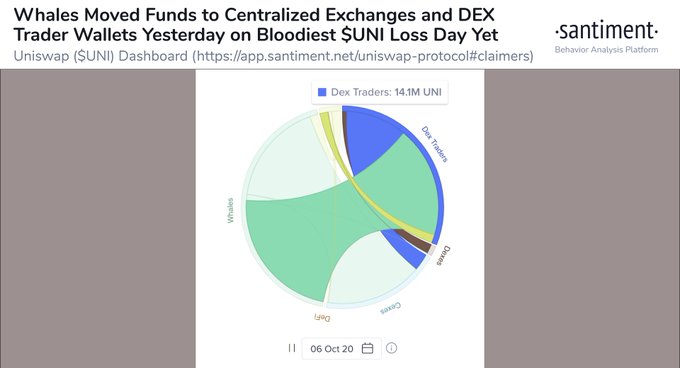 As per Santiment, UNI’s whales sold $2.8 million worth of capital in an attempt to move from centralized exchanges to DEX trader wallets. Further, the long/short ratio revealed that the shorts had become prevalent and that there may be a flip to more shorts than longs sometime in the near future.

However, UNI’s price began recovering from its fall on 8 October, with the crypto registering a great surge given the recent hike in the Bitcoin market. In fact, the digital asset managed to gain 34% of its value in 3 days. With the value of UNI rising, the crypto-asset was also reporting a figure of 74% trading protocol market shared while surpassing Coinbase with respect to daily volume.

In fact, according to a report by Our Network contributor Teo Leibowitz, the Strategy lead at Uniswap, between 28 September and 4 October, Uniswap’s volume hit $811 million across ETH-USDT, ETH-USDC, and ETH-DAI versus Coinbase’s $322m across ETH-USD, ETH-GBP, and ETH-EUR.

Nevertheless, the exchange outperformed on a volume basis across longer-tail assets like Omisego [OMG], Orchid Protocol [OXT], and Band protocol [BAND] by an average margin of 98%. Further, at the time of writing, Coinbase Pro’s daily volumes were once again overshadowing that of Uniswap’s.

With its unique users already hitting an ATH of 145,000 in September, over 1 million swaps have taken place in four out of the last five weeks. The average trade size of these swaps was $923. Finally, users have managed to spend over $12.7 million in gas just in the past 30 days, which was the highest of any ETH-based smart contract.