Have you taken time to fully understand the Lightning Network?

In my opinion, this is one of the most important crypto trends in the industry right now.


What is the Lightning Network?


Lightning Network (LN) is an open-source protocol that sits on top of blockchains to allow for anonymously routed payment channels, capable of millions of transactions per second. Lightning Network was originally created for the Bitcoin network but can theoretically be implemented on top of any blockchain.

Lightning Network was originally created by a company called Lightning Labs; however, there are at least 6 teams working on implementation right now. Each team is working under an interoperability standard (BOLT) which allows all Lightning implementations to seamlessly integrate.

The 3 main teams working on Lightning are Lightning Labs, Blockstream, and ACINQ.

There is an ongoing debate in the crypto community about whether we should scale at the protocol level (on-chain) or scale by adding a second layer on top of the blockchain (off-chain). If we’re going to reach mass adoption, the only realistic strategy involves improving scalability on both layers.

Lightning Network is the most promising “off-chain scaling protocol” we have and it’s currently running live on the mainnet of Bitcoin in a limited capacity.  LN is not only helps with scaling, but it also has a high level of privacy built directly into the protocol via onion routing which has wide-sweeping implications for privacy coins.

In this article, I take a look at the 3 key benefits of Lightning Network, and whether or not they will make privacy coins and pure currency coins obsolete.

No coins come close to competing with Bitcoin’s robust security and immutability. However, the Bitcoin network is currently congested which leads to high transaction fees and slow confirmations.

Due to Bitcoin’s limited throughput, we’ve seen several other currency coins trying to compete with Bitcoin. However, when Lightning Network is implemented, alternative currency coins will likely lose their competitive edge.

With Lightning, Bitcoin will be capable of millions to billions of transactions per second across the network, with fees less than 1 satoshi via the Lightning Network.

If Bitcoin achieves near zero fees, instant payments, and millions of transaction per second through LN, what is the future of alternative currency coins?

At the moment, Lightning Network is still in its infancy which gives alternative currency coins a competitive advantage of being “faster” and having “lower fees.”

However, when Lightning Network is fully functioning on top of Bitcoin (and Litecoin), I don’t see how other currency coins such as Bitcoin Cash, Dash, and Nano can compete.

The main advantages of Bitcoin are network effect and proven security. Both are nearly insurmountable advantages.

Imagine the consequences of Bitcoin becoming the network with the best security, largest network effect, and the fastest and cheapest transactions.

What about new technology such as Directed Acyclic Graph (DAG)? New cryptocurrencies are being developed, such as Nano, which are boasting “feeless instant transactions.” While I find this interesting and they’re very popular among newbies, the technology is still untested, and lacks the robust security of Bitcoin.

My prediction is alternative currency coins (that do not implement LN) have more than 6 months but less than 3 years before they dramatically lose market share.

Vulnerable coins: All “pure currency coins” that do not implement Lightning Network. Examples include Bitcoin Cash, Dash, Nano, and Dogecoin. 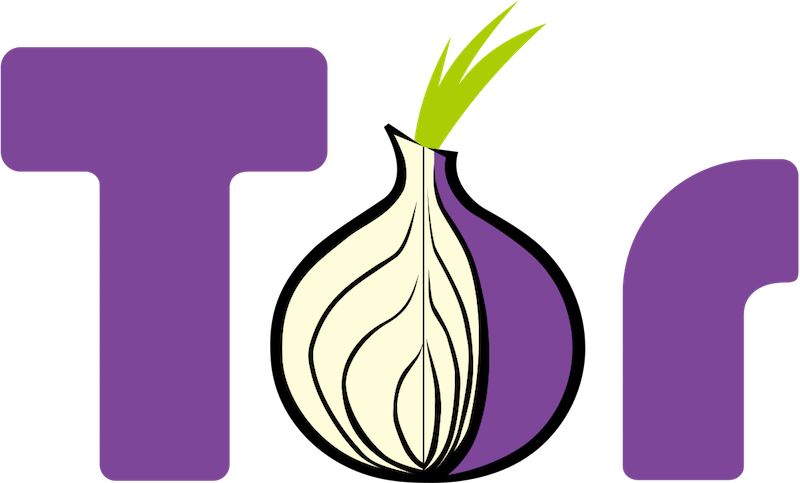 When discussing privacy, it’s important to understand that privacy is on a scale and it’s all about trade-offs. The more privacy you want, the more expensive each transaction becomes.

For example, Monero has default privacy features built into the protocol (such as Range Proofs and RingCT) which result in heavier transactions and higher fees. Some currencies such as Zcash opt for “optional privacy” to keep network fees low. However, this is a huge compromise because if privacy is not a default feature of all transactions, then the network itself is not private.

The important question: can we improve scalability AND increase privacy? The Lightning Network achieves a good balance of both.

Privacy on Lightning Network is primary achieved in 2 ways: though Onion Routing and Lightning transactions not being stored on the blockchain.

What is Onion Routing?

Onion routing is a technique for anonymous communication over a computer network. In an onion network, messages are encapsulated in layers of encryption, analogous to layers of an onion. The encrypted data is transmitted through a series of network nodes called onion routers, each of which “peels” away a single layer, uncovering the data’s next destination. When the final layer is decrypted, the message arrives at its destination. The sender remains anonymous because each intermediary knows only the location of the immediately preceding and following nodes.

This is a big deal. Every transaction on the Lightning Network is by default a private transaction. Privacy is built into the protocol while still maintaining instant confirmations and near zero fees. According to Andreas Antonopoulos, Lightning Network brings “a very high degree of privacy.”

Onion Routing is the same technology used in the Tor Browser.

While Onion Routing adds a tremendous amount of privacy to BTC, it’s not perfect. There are a few potential vulnerabilities with Onion Routing, most importantly Timing Analysis and Exit Node Vulnerability.

Timing Analysis is when the attacker gains control of many nodes in the network and studies the timing of transactions being sent through the network.

Exit Node Vulnerability exists because there will always be a gateway computer that links the TOR network with the regular internet. An attacker can control of some “exit nodes” which allows them to steal data of unsuspecting TOR users.

Lightning Transactions Are NOT Stored on the Blockchain

In order to start transacting on the Lightning Network, participants first need to commit some bitcoin to a payment channel. This first “bitcoin commitment” is as an on-chain transaction, which comes with a standard on-chain fee and is forever immutable on the blockchain.

After opening this payment channel, participants can make private, fast, cheap transactions over the network without creating any on-chain transactions. When you’ve finished transacting on the LN, you pay an on-chain fee to close your payment channel which leads to your ending balance being recorded to the blockchain.

In short: Opening and closing a payment channel on the LN requires an on-chain transaction, but all transactions in the middle are confirmed instantly, with almost no fee, and with a very high degree of privacy.

How Will Privacy Coins Compete Against a “Lightning Fast” and Private Bitcoin Lightning Network?

Currently the biggest currency coins (BTC, BCH, LTC) do not contain any privacy features. In fact, these networks are very easy to track and we should assume every transaction is being closely monitored by everyone with a vested interest.

This has led to a thriving market of coins trying to keep transactions private. What will happen to these privacy coins when the Lightning Network is adopted on Bitcoin, Litecoin, and others?

The “optional privacy” and “sort of private” coins will lose their competitive advantage and die a slow death. But that doesn’t mean all privacy coins will die.

Since Bitcoin is slow to change and adopt new technologies (a major strength in most cases), it does leave room in the market for coins that can be on the cutting edge of privacy by constantly evolving and adopting new technologies at a faster pace.

The question then becomes: which privacy coins are both the most private and the most forward thinking?

However, long-term, I believe a few privacy coins will thrive. Whoever achieves the highest degree of privacy and continues to innovate will always have a place at the table.

Monero (XMR) seems to be leading the pack, and if they can continue to adopt new technology (like bulletproofs) I believe they will continue to thrive. Full disclosure: the only privacy coin I currently hold is XMR.

Let’s say you want to pay a merchant in LTC but all you have is BTC. Currently, you would have to send your BTC to an exchange (1st fee), then trade your BTC for LTC (2nd fee), and finally send your new LTC to the merchant (3rd fee).

This makes transactions between different coins slow and expensive. This is a huge barrier to mainstream adoption, and until recently there was nothing we could do about it.

In simple terms, Lightning Network gives us the ability to swap currencies instantly, privately, with no counterparty risk, basically for free, without needing an exchange. This is a really big deal.

You can see which coins are ready for atomic swaps over Lightning Network on this site by looking at the chart titled “Atomic swaps on Lightning and similar networks.”

Why are off-chain, cross-chain atomic swaps on Lightning Network important?

When Will Cross-Chain Atomic Swaps on Lightning Network Be Ready?

Elizabeth Stark (@Starkness) says it won’t be ready for scale in 2018 because there is still a ton of infrastructure to build. I predict we’ll start to see atomic swaps on the mainnet in 2018, but things will really start to pick up in 2019 and beyond.

That being said, I’m optimistic that atomic swaps may be ready sooner than anticipated, for the following reasons: 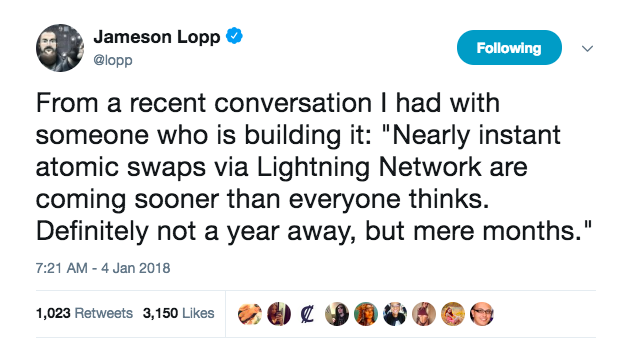 How Will Atomic Swaps Affect Currency Coins and Decentralized Exchanges?

The day that off-chain, cross-chain atomic swaps become widely available on the Lightning Network Mainnet will be a huge win for the crypto community at large. After the UI/UX community makes this process user-friendly, we’ll have all the infrastructure required to support mainstream adoption.

From an investment perspective, the important question to ask is: which coins will be “swap ready” with the Bitcoin Lightning Network?

These off-chain, cross-chain atomic swaps will cause a divide in the currency coins: those that are “swap ready” with Lighting and those that disappear into the abyss.

Assuming speed and fees are comparable, why would any currency coin try to compete with the security, immutability, and network effect of BTC/LTC?

Vulnerable coins: Any pure currency coin that isn’t capable of atomic swaps with BTC on the Lightning Network.

If Lightning Network Achieves its Vision, Here Are My Predictions

I believe layer 2 solutions are an important step in the scaling debate and I’m very optimistic about Lightning Network, which I believe to be the most important innovation in the crypto space today.

The Lighting Beta was released on the Bitcoin mainnet on March 15, 2018. We already have over 1,000 nodes live, Japan’s third largest electric provider is testing Lightning, and Bitrefill is already accepting Lightning payments.

If Lightning achieves its vision, there are wide-sweeping implications for both pure currency coins and privacy coins alike.

Predictions about the future of crypto don’t age well. That said, here are mine:

It’s also important to note that BTC and its clones are not the only networks adding layer 2 scaling solutions like Lightning Network. Ethereum is working on Raiden, NEO is working on Trinity, and ZEC, XRP, and XRP each have projects in the works.

I would love to hear from you: what effect could the Lightning Network potentially have on privacy and/or currency coins?