“Breaking news: Mark Zuckerberg and Facebook just endorsed Donald Trump for re-election,” the ad begins, above an image of Zuckerberg and Trump shaking hands in the Oval Office.

That’s not true, which the Massachusetts Democratic senator reveals a littler later in the advertisement.

“You’re probably shocked, and you might be thinking: ‘How could this possibly be true?’ Well, it’s not. (Sorry),” the ad said. “But what Zuckerberg *has* done is given Donald Trump free reign to lie on his platform — and then to pay Facebook gobs of money to push out their lies to American voters.”

All week, Facebook has taken heat for refusing to take down a false ad run by Trump’s reelection campaign about former Vice President Joe Biden, a frontrunner in the 2020 race. In the 30-second ad, the Trump campaign accuses Biden of promising Ukraine $1 billion if its government fired the prosecutor investigating his son, Hunter Biden, who was on the board of a company in the country.

Trump's efforts to find damaging information about the Bidens' actions in Ukraine that would benefit his re-election campaign are at the heart of an impeachment inquiry by House Democrats.

Biden’s campaign sent a letter to Facebook, requesting the company take down the ad, which has been viewed 5 million times. But Facebook refused, saying the video did not violate company policies.

Last month, Facebook executive Nick Clegg said in a blog post that politicians had almost total control of the content they posted online. Although Facebook employs third-party fact-checkers to reduce the spread of false news, politicians are exempt.

While Warren acknowledged that Zuckerberg had not actually endorsed Trump, she went on to blame the company for helping him win in 2016. The social media firm and its rivals have faced intense scrutiny since that election over their failure to prevent misleading posts and ads, many posted by Russian intelligence agents, that were designed to influence and inflame U.S. voters. 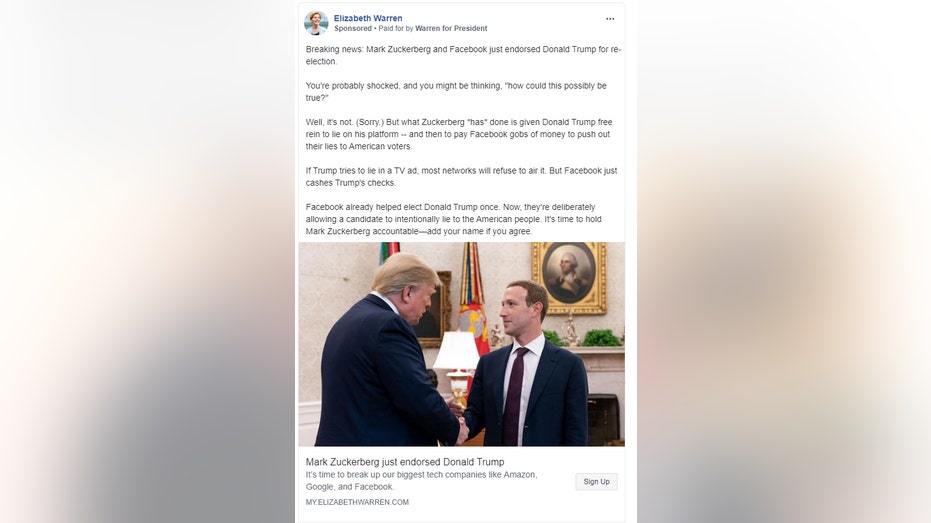 In May, Warren introduced a proposal to break up the country’s biggest tech companies, which include Facebook, Google and Amazon.

Leaked audio from a Facebook question-and-answer session in July revealed Zuckerberg candidly discussing some of the sweeping proposals introduced by Warren and promising to “go to the mat” to fight her break-up plan if she wins the White House.

“What would really ‘suck’ is if we don’t fix a corrupt system that lets giant companies like Facebook engage in illegal anticompetitive practices, stomp on consumer privacy rights, and repeatedly fumble their responsibility to protect our democracy,” she wrote.

Can Online Payday Advance Loans Help Me in An Emergency?