As demonstrators protested the death of George Floyd across the country this week, some participants took advantage of the chaos to loot and vandalize nearby stores.

In Minneapolis, where Floyd died while being arrested by a white officer, protesters broke into a Target and set fire to an AutoZone on Wednesday night, FOX Business previously reported.

On Thursday night, other stores were hit, including a Family Dollar, GameStop, Urban Outfitters, Sephora and Timberland in Minneapolis.

In fact, CVS spokesperson Amy Thibault told FOX Business on Saturday that more than a dozen locations in the Minneapolis area have been damaged and closed “as a result of the ongoing unrest in the state.” 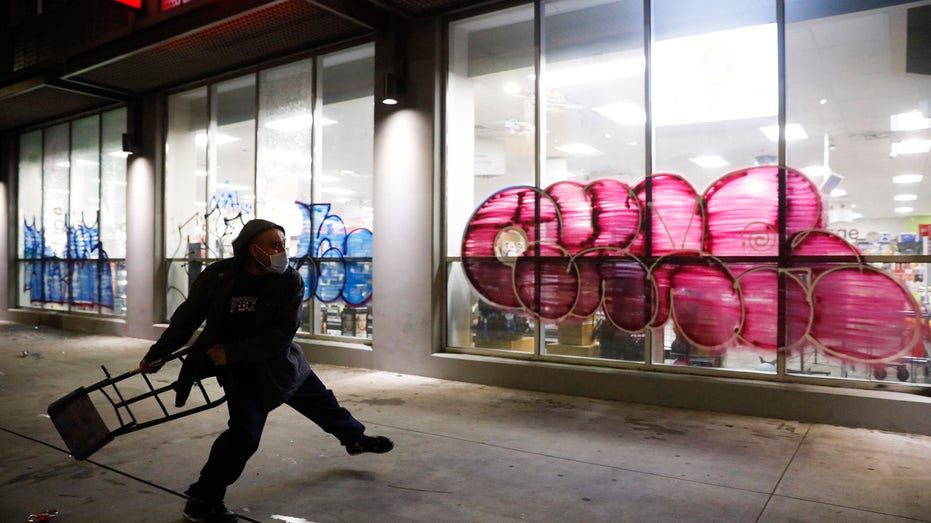 A man throws a hand truck into the window of a vandalized CVS store during a protest in Los Angeles. (AP Photo/Jae C. Hong)

TARGET CEO RESPONDS TO MINNEAPOLIS PROTESTS: ‘WE ARE A COMMUNITY IN PAIN’

The damage has stretched far beyond Minneapolis, too, leaving U.S. companies facing hard choices about whether to close stores and for how long. CVS, for instance, has shut sites in California, Georgia, Indiana, Kentucky, Ohio, Texas and Wisconsin, Thibault said.

In some cases, those closures were a result of damage done to the store, but in others, they were precautionary.

“We believe in equality for all, mourn this tragedy we are facing as a country, and respect the right for peaceful protests,” the company said in a statement emailed to FOX Business. “However, vandalism in our communities is not the solution.”

On Friday, Target CEO Brian Cornell also responded to the protests, promising the damaged Target in Minneapolis would be rebuilt.

“We are a community in pain,” Cornell wrote in a statement on the Target website. “That pain is not unique to the Twin Cities — it extends across America. The murder of George Floyd has unleashed the pent-up pain of years, as have the killings of Ahmaud Arbery and Breonna Taylor.”

IPOs Are ‘Really Not Worth It’ Says Tim Draper