Micron Technology, Inc. (MU) stock just ran in place during the summer's historic tech advance but jumped nearly 3% to a six-week high on Monday, following positive commentary from Goldman Sachs. Analyst Toshiya Hari upgraded Micron stock from "Neutral" to "Buy," stating, "We believe signs of supply discipline on the part of the memory suppliers (i.e. capex cuts) and price stabilization will serve as potential catalysts for the stock."

The stock has underperformed by a wide margin so far in 2020, losing 8% while the PHLX Semiconductor Index (SOX) has risen 18%. Fortunately for bulls, Hari now believes that recent pricing weakness won't last and that Micron's laggard behavior has been fully discounted by financial markets. He also expects the supply/demand balance in production and inventory to tighten while the expansion of 5G smartphone sales in 2021 stokes demand.

Wall Street consensus is stronger than the stock's weak performance, with a "Moderate Buy" rating based upon 17 "Buy" and 6 "Hold" recommendations. One analyst recommends that shareholders sell positions at this time and move to the sidelines. Price targets currently range from a low of $35 to a Street-high $100, while Micron is now trading about $13 below the median $62 target. There's plenty of room for upside in this placement, but more positive catalysts may be needed to get skeptical investors off the sidelines.

A discounting mechanism operates on the premise that the stock market essentially discounts, or takes into consideration, all available information including present and potential future events. When unexpected developments occur, the market discounts this new information very rapidly. The Efficient Market Hypothesis (EMH) is based on the theory that the stock market is a very efficient discounting mechanism. 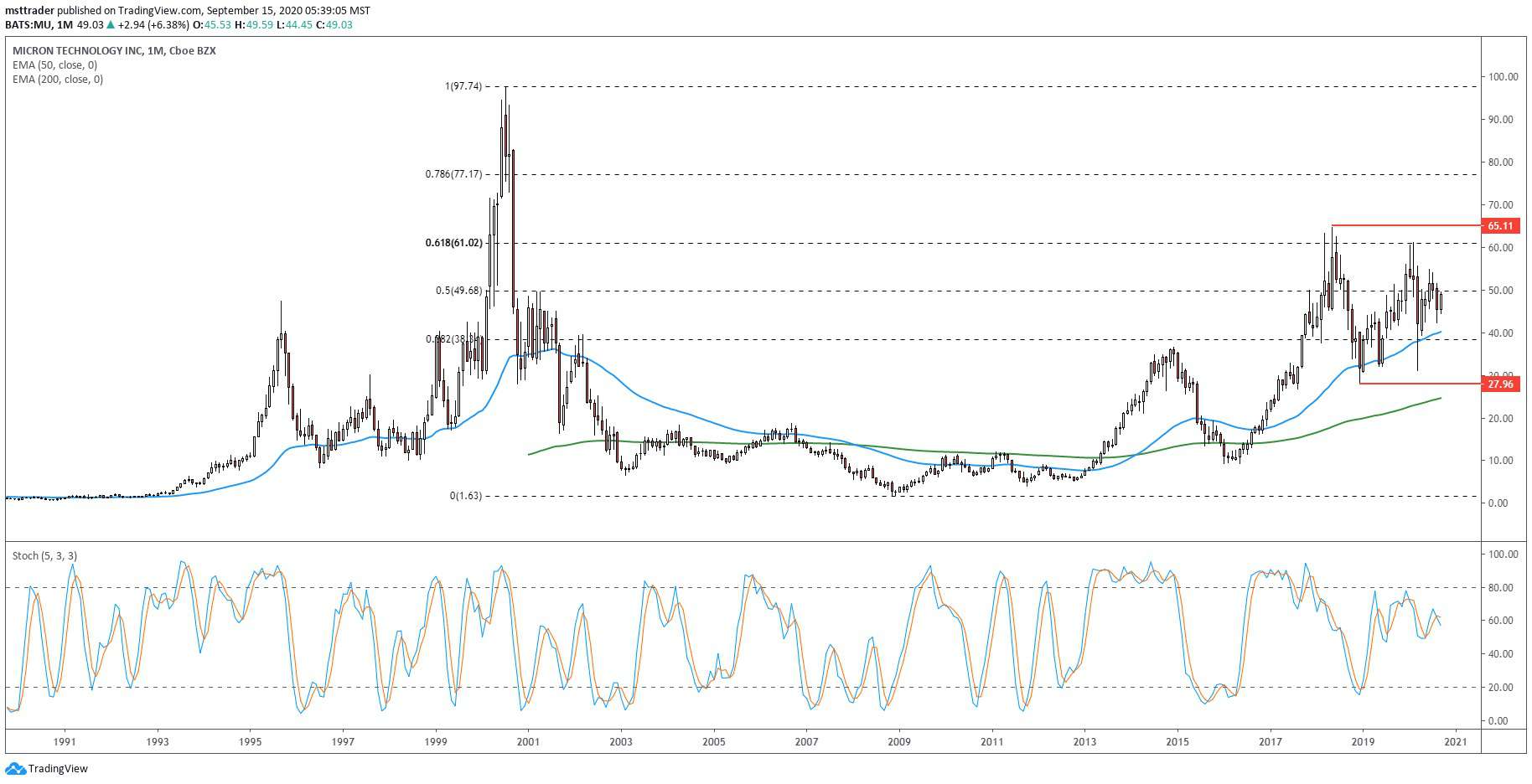 The stock accelerated to an all-time high at $97.50 in 2000 and entered a brutal bear market that initially found support at $6.60 in the first quarter of 2003. A weak buying impulse made little progress into the 2006 top in the mid-teens, while renewed selling pressure sliced through the prior low in 2008 before bottoming out at a 16-year low. That marked the end of the multi-year downtrend, ahead of a two-legged advance that stalled in the mid-$30s in 2014.

The subsequent decline relinquished more than two-thirds of the stock's value into the first quarter of 2016, giving way to renewed buying interest that finally completed a round trip into the prior high in the summer of 2017. A fourth quarter breakout attracted solid buying interest, lifting Micron shares to an 18-year high in the mid-$60s in May 2018. That marked the highest high in the past two years, while a selloff into year end posted the lowest low in the past 20 months. 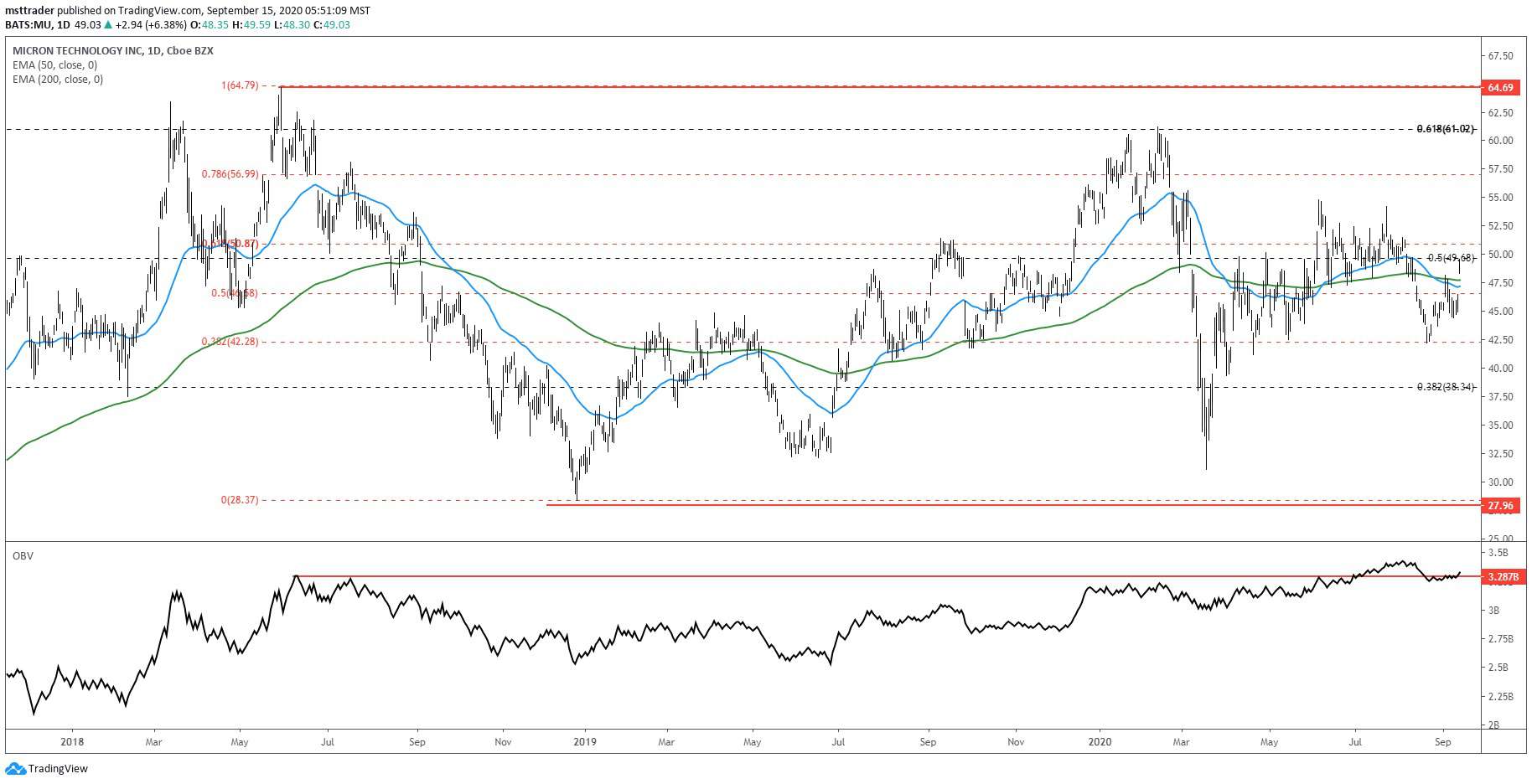 The on-balance volume (OBV) accumulation-distribution indicator topped out with price in June 2018 and entered a distribution phase that ended at a 15-month low one year later. Buying pressure into September 2020 reversed after mounting the 2018 high, but the effort highlights growing optimism that could underpin share prices. Even so, the stock is embedded within a complex sideways pattern that will take great effort to yield a trend advance in either direction.

The rally into 2018 reversed at the .618 Fibonacci selloff retracement level, highlighting hidden resistance that came back into play during the run-up into February 2020. It will take a high-volume breakout above this harmonic level to set off long-term buying signals, telling sidelined investors to keep their powder dry for now. In addition, the stock is glued to the midpoint of the multi-year trading range, with inertia the controlling force. Both elements are warning chip bulls to look elsewhere for consistent profits.

A sideways market occurs when the price of a security trades within a fairly stable range without forming any distinct trends over some period of time. Price action instead oscillates in a horizontal range or channel, with neither the bulls or bears taking control of prices.

Micron stock rallied to a six-week high after Goldman Sachs upgraded the chronic underperformer to "Buy." Even so, it will take months or longer to set off long-term buying signals.

Disclosure: The author held no positions in the aforementioned securities at the time of publication.