The best way for investors to handle downgrades to corporate bonds with credit ratings on the cusp of junk which end up losing their investment-grade status, is doing nothing at all, according to a recent Bank of America Merrill Lynch report.

Cheap financing for U.S. companies has led the corporate bond market to swell to $6.9 trillion over the past decade, with the BBB-rated segment reaching an all-time high of $3.5 trillion, according to the U.S. investment grade ICE BAML index.

The worry is that a slowing economy, or potentially even a recession, could leave companies struggling to keeping up on their debt payments.

And a string of high-profile corporate defaults could trigger credit rating agencies to rethink their strategy and issue a painful wave of downgrades to BBB-rated debt.

Surprise downgrades can cause bonds once considered lower-risk to trade at cheaper prices after they drop into high-yield territory.

But should investment-grade companies end up tumble into the junk ratings category and become “fallen angles,” Bank of America analysts said the worst thing investors can do is panic and sell.

“One question we often get is: what is the optimal time to sell fallen angels [FA]?” Bank of America Merrill Lynch analysts led by Hans Mikkelsen wrote on June 7. “Our response is this: don’t sell.”

Mikkelsen points out that losses on BBB-rated corporate bonds have been low historically even through prior recessions, and that buy-and-hold strategies have given investors the best bang for their buck.

The team found that investors earned 1.63% annually in excess of U.S. Treasuries by holding BBB-rated bonds to maturity, versus only 1.26% if the bonds were downgraded to high-yield and sold at the end of the month in which the ratings were cut. 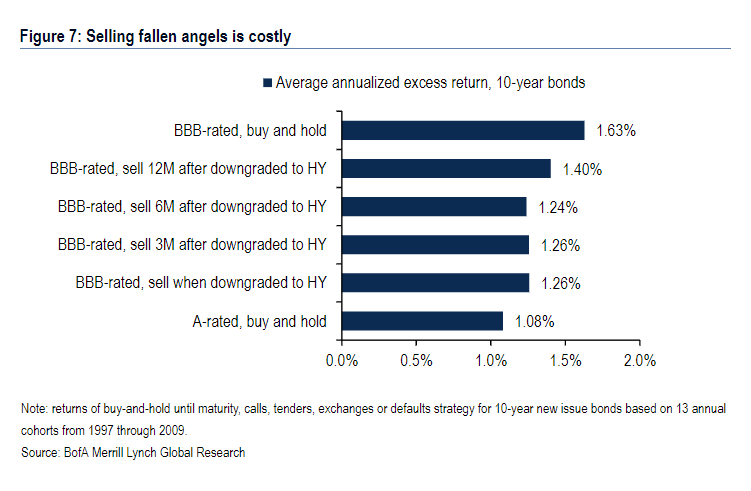 The report tracked annualized returns on 10-year BBB-rated bonds issued between 1997 and 2009.

Some investors and exchange-traded funds (ETFs) have investment guidelines that require holdings to be sold if credit ratings fall below investment-grade, which as Mikkelsen’s team points out, could force liquidations on the market.

“This is one major disadvantage of passive ratings constrained strategies – including ETFs – as they are likely to end up owning all future FAs and liquidate at the worst possible time, effectively in fire sales,” he wrote.

Regulators, academics and lawmakers have been sounding alarms about a bubble forming among U.S. companies with weak finances. Last October, Morgan Stanley analysts warned that $500 million to $1 trillion of BBB-rated debt could be downgraded during the next credit cycle.

But fears have subsided in the months since the Federal Reserve signaled a more cautious approach to future interest rates hikes this year which may extend the sector’s run. In January, 38% of investors polled by Bank of America expected BBB-rated corporate bonds to outperform the rest of the market for the next 12 months, up from 20% in November.

And after last week’s disappointing U.S. monthly jobs report, the odds of a Fed interest rate cut now sits at 77% for July and 92% by mid-September, according to data from the CME Group.

Another potential salve for BBB-rated bonds is that companies rated on the edge of junk have begun to look for ways to shore up their balance sheets, sell assets and avoid downgrades.

“Companies and management have been doing the right thing,” Tom Murphy, Columbia Threadneedle’s head of investment-grade credit, told MarketWatch in an interview. “And the Fed is in a more supportive position than it was last year.”

READ: Overleveraged companies at the edge of a drop to ‘junk’ will sharply cut debt.

But for those investors who must sell BBB-rated bonds hit by downgrades, Bank of America analysts suggest the next-best option is to delay sales.

“We recommend a 12-month delay, but at the very least six months after the downgrade to [high-yield,” the analysts wrote.