The world of exchange traded funds is evolving. With a slew of new ETFs, you will be able to not only diversify your portfolio, but also to take advantage of active management to lower risk while keeping a handle on expenses.

New actively managed ETFs being developed under new rules from the Securities and Exchange commission will not be required to list their holdings daily, the way traditional ETFs do. The TrimTabs All Cap US Free-Cash-Flow ETF TTAC, -0.03% is actively managed and lists its holdings daily, for full transparency. Janet Johnson, a portfolio manager at TrimTrabs, described the ETF’s active approach in an interview.

Johnson’s stock selection begins with the Russell 3000 Index RUA, -0.07% which includes large-cap, mid-cap and small-cap companies. She narrows the list to an equal-weighted group of about 100 companies using computer models to screen for various factors. The companies are limited to those that are expected by analysts to show large increases in free cash flow (FCF) over the next several years.

A company’s free cash flow is its remaining cash flow after planned capital expenditures. This is money that can be used for organic expansion, to pay dividends, repurchase shares, make acquisitions or for other corporate purposes. Free cash flow can be a better indicator of the health of a company’s business than earnings, because earnings figures can be dramatically affected by one-time events, including many types of noncash items.

“Over the long term, free cash flow is a good determinant of alpha,” Johnson said. Alpha means excess returns over that of a benchmark index.

“We look at free cash flow, strong balance sheets and a little bit of share-count reduction. As investors, we want a little bigger piece of the pie,” Johnson said.

When asked about the active component of the ETF’s portfolio management, Johnson said she was looking in the current environment for “moats,” including technological advantages.

“Recently we have been looking at currency exposure, supply-chain exposure and revenues from China,” she added.

Johnson also said she was avoiding companies that increase their borrowings to repurchase shares. “We like companies with strong organic growth, not engineered growth,” she said.

Johnson named five companies held by the TrimTabs All Cap US Free-Cash-Flow ETF as examples:

• Lululemon Athletica LULU, +0.16% is well-known as a high-flying growth stock. But you might not have been aware that the company increased its free cash flow to $517 million in fiscal 2018 from $331 million the previous year. Johnson likes the company because of its “very strong balance sheet, cash moat and double-digit sales growth in the U.S. and in China.”

• Walt Disney Co.’s DIS, -1.45% free cash flow story is a bit more complicated, because of the company’s recent acquisition of Fox and the tremendous investments it is making in its theme-park and video-streaming service. Free cash flow for fiscal 2019, which ends Sept. 30, is expected to come in at $10.1 billion, increasing 16% from the previous year. However, it is expected by analysts to decline to $9.7 billion in fiscal 2020 before increasing slightly to $9.8 billion in 2021. “We like what Disney is doing in terms of expanding into the streaming market. It is just another channel for their content,” Johnson said, while emphasizing how good Disney has been at spreading its content across various outlets, including Broadway shows and theme parks.

Match Group MTCH, -0.24% runs various online dating services, including Tinder and Match. “At this point, Match is a tad on the expensive side. But we are long-term holders of this stock. For this year and next year it has estimated 16% revenue growth, which for this economy is fantastic,” Johnson said. The company’s free cash flow increased by 82% in 2018 to $573 million. It is expected by analysts to increase 7% to $611 million this year, followed by a 19% increase in 2020 and a 16% increase in 2021.

Johnson stressed the importance of the TrimTabs All Cap US Free-Cash-Flow ETF’s equal portfolio weighting, and her opinion is backed by long-term performance of benchmark indexes. 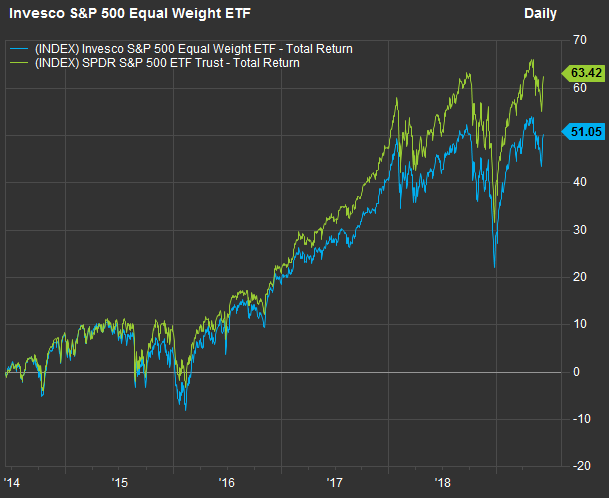 You can see that the equal-weighted portfolio didn’t fall as far as the cap-weighted index ETF did during the fourth quarter.

For 10 years, the cap-weighted ETF had a slightly better return: 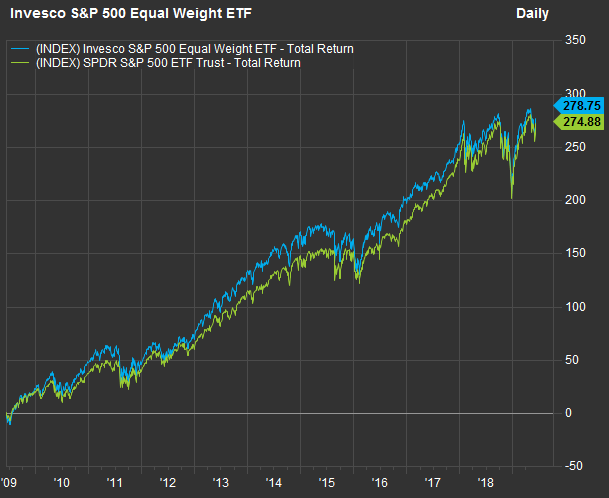 But for 15 years, the equal-weighted approach was in the lead: 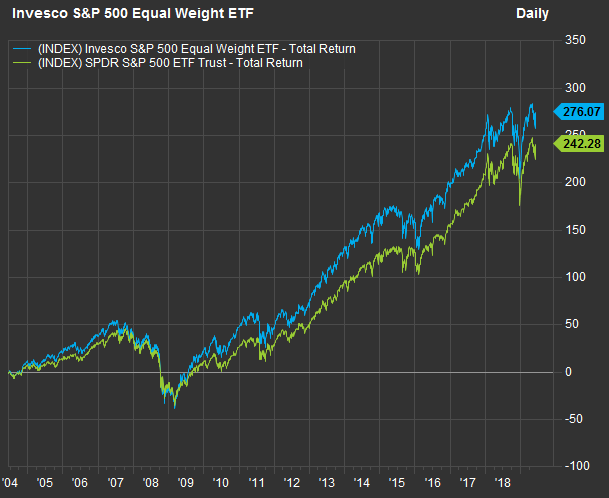 Investors love the convenience of traditional ETFs, including the ability to trade at any time while the stock market is open, as well as low expenses and transparency — you can see a list of the entire portfolio every day. Most ETFs track an index — either a well-established one, such as the S&P 500 or an index that is created especially for the ETF to track. This passive management style means that once the parameters are set, the ETF pretty much runs itself. That can mean very low expenses.

In April, the SEC made a ruling that is expected to lead to the creation of new ETFs that are actively managed, but “nontransparent,” meaning that unlike traditional ETFs, they will not post a full list of their holdings every day.

Some active managers understandably fear that exposing their holdings would erode their competitive advantages. Johnson doesn’t believe this is a problem, at least for TrimTabs. “In our long experience, investors looking over our shoulder most often hesitate to follow everything exactly as we do it because they might have their own opinions about a particular trade,” she said.