For decades, Robert E. Lighthizer, the US trade representative, was reliably one of Washington's toughest critics when it came to China and its trade practices.

But since brokering a trade deal with Beijing in January, he has become one of China's biggest defenders within the administration, emerging as an obstacle to lawmakers and other top White House officials who want to punish China over its treatment of ethnic Muslims and begin trade talks with Taiwan.

Over the past several months, Lighthizer has pushed back on several proposed policy measures that rankled Beijing, arguing those efforts could disrupt the US-China trade pact that he and President Donald Trump spent more than two years trying to forge, according to several former government officials and other people familiar with the conversations. 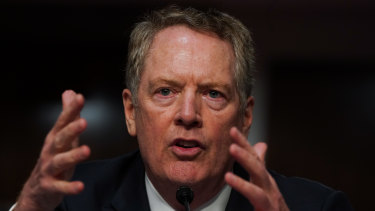 US trade envoy Robert Lighthizer emerging as an obstacle to lawmakers and other top White House officials who want to punish China.Credit:Bloomberg

Lighthizer has also curtailed his public criticisms of China, instead praising Beijing's efforts to uphold the trade pact and live up to its end of the deal.

Those views have brought Lighthizer into conflict with more hawkish members of the Trump administration, including State Department officials who have advocated closer ties with Taiwan, along with members of Congress.

On Thursday, 50 US senators of both parties sent Lighthizer a letter urging him to begin the formal process of negotiating a trade pact with Taiwan, a self-governing island that Beijing claims as part of its territory. Such a move would probably anger Beijing, which sees certain partnerships with Taiwan as an affront to China's sovereignty.

"We are confident that a US-Taiwan trade agreement would promote security and economic growth for the United States, Taiwan and the Indo-Pacific as a whole," they wrote. "We urge the administration to prioritise a comprehensive trade agreement with Taiwan, and we look forward to working with you to secure this framework."

Proponents say dealing directly with Taiwan could help counter some of China's growing influence in technology and commerce, while also helping to strengthen a democratic ally. But Bonnie Glaser, a senior adviser for Asia at the Centre for Strategic and International Studies, said concerns over preserving the deal with China were likely to sink the prospects of trade negotiations, at least for the remainder of this administration.

"The administration, particularly of course USTR, they're focused like a laser on this trade deal with China," she said. "The president doesn't want it to fall apart."

Lighthizer's warmer stance toward Beijing comes amid growing tensions between the United States and China. Trump has said he is "not happy" with China for allowing the coronavirus to spread beyond its borders and has ratcheted up punishment on Chinese tech companies like TikTok and WeChat, saying they pose a threat to national security.

Yet Trump has not ripped up the trade deal or threatened to take additional trade action against Beijing. In part, that is because the president faces pressure — from American banks, businesses and farmers — not to let commercial ties with China deteriorate further, especially right before the election.

Lighthizer's shift in tone is notable, given that he built a reputation as a China critic during a long career in Congress, the executive branch and as a Washington trade lawyer. His history of battling China, including pursuing trade cases against the country and opposing its entry into the World Trade Organisation, was what first ingratiated him to Trump, who held a similarly dim view of China's trade practices.

But Lighthizer has recently intervened to shoot down several policy measures that could have threatened China economically, including efforts by US Customs and Border Protection to impose a sweeping ban on cotton and tomatoes from Xinjiang.

The measure, which was scheduled to be announced the morning of September 8, would have banned many products from Xinjiang over concerns that they were made with forced labour by Uighurs and other Muslim minorities that China has detained in camps in the region. But Lighthizer joined Steven Mnuchin, the Treasury secretary; Sonny Perdue, the secretary of agriculture; and Mark Meadows, the White House chief of staff, in objecting to the measure on the grounds that it could provoke China, threatening US cotton exports and the trade deal, people familiar with the matter said. China is one of the world's largest cotton importers, purchasing nearly $US1 billion ($1.4 billion) worth of American cotton in 2018. 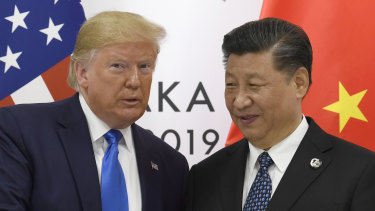 US President Donald Trump not to let commercial ties with China deteriorate further, especially right before the election.Credit:AP

Earlier this summer, as the Trump administration brainstormed ways to retaliate against China for its crackdown on Hong Kong, Lighthizer also opposed the idea of placing tariffs — similar to those imposed on China — on Hong Kong.

But Lighthizer's reluctance to begin trade talks with Taiwan, a self-governing island that Beijing claims as part of its territory, has been more controversial. In particular, it has placed him in opposition with officials from the departments of State, Defense and Commerce and the National Security Council, who support closer relations with the island to counter China's influence.

Things came to a head after David R. Stilwell, assistant secretary of state for the Bureau of East Asian and Pacific Affairs at the State Department, gave a speech at a Washington think tank in late August proposing new economic engagement with Taiwan. The State Department also began planning to dispatch its most senior economic official, Keith Krach, to Taiwan in mid-September.

Those proposals prompted a disagreement between Mike Pompeo, the secretary of state, and Lighthizer, who viewed trade talks with Taiwan as being firmly in USTR's domain, three people familiar with the matter said. Another person said that USTR and the State Department had clashed over Krach's trip.

In an emailed response, Lighthizer called the anecdote "a crazy, made-up story."

"I've never spoken with Secretary Pompeo about any of this. And I've never had an angry clash with the secretary about this or anything else in my entire life," Lighthizer said.

China considers its claim to Taiwan non-negotiable, and it has lashed out at companies and politicians that do not support that view, including trying to muscle Taiwan out of multilateral trade deals to economically isolate the island. But Taiwan's president, Tsai Ing-wen, has sought to increase the island's independence by cultivating closer ties with the United States.

In late August, Tsai eased previous restrictions on imports of US beef and pork, a move aimed at enticing the United States into trade talks. Pompeo welcomed the move on Twitter, saying that it "opens the door for even deeper economic and trade cooperation." USTR did not issue any statement.

Taiwan is home to fewer than 24 million people, but it was the 10th-largest US trading partner in 2019, providing a large market for American agricultural products and arms sales.

US officials have also come to see Taiwan, a major electronics supplier, as a bulwark against China's domination of certain advanced technologies. In May, the Trump administration announced that Taiwan Semiconductor Manufacturing, a leading computer chipmaker, had pledged to build a factory in Arizona, though that project is still awaiting congressional funding.

Not everyone thinks trade talks with Taiwan would be a certain success. James Green, a senior adviser at McLarty Associates and a former trade official, said the United States spent two decades negotiating with Taiwan over a trade and investment agreement with little result. He said that Lighthizer might be reluctant to begin such a long, difficult process right before an election, when the administration's future is uncertain.

A concise wrap of the day on the markets, breaking business news and expert opinion delivered to your inbox each afternoon. Sign up for the Herald‘s here and The Age‘s here.