CFTC Ready For Ethereum Futures, Will ETH Surge to $200?

It was only a matter of time before Ethereum woke up andstarted enjoying the gains that Bitcoin has been reveling in recently. Some solidfundamentals were all that was needed to give ETH a kick out of its torpor.

Ethereum Futures On The Way

Those fundamentals came in the form of the US Commodity Futures Trading Commission (CFTC)which told CoinDesk that they are ready to consider an Ethereum futurescontract. Apparently a senior official who chose to remain anonymous told theoutlet that the regulator can “get comfortable with an ether derivative beingunder our jurisdiction,”

There was no direct mention of any specific products yet butthe regulator, which has been known for dragging its feet with regards tocrypto futures, stated;

“A derivatives exchange comes to us and says ‘we want to launch this particular product.’ … If they came to us with a particular derivative that met our requirements, I think that there’s a good chance that it would be [allowed to be] self-certified by us.”

Futures only allow betting on a future price, not directinvestment in Ethereum, but considering how popular the Bitcoin ones where whenthey launched in late 2017 new products could do the same for ETH.

The reaction came swiftly as expected. Ethereum has been pretty inactive recently, especially when compared to its big brother which cranked out a 30 percent gain in April alone. Ethereum has barely managed this since the beginning of the year. 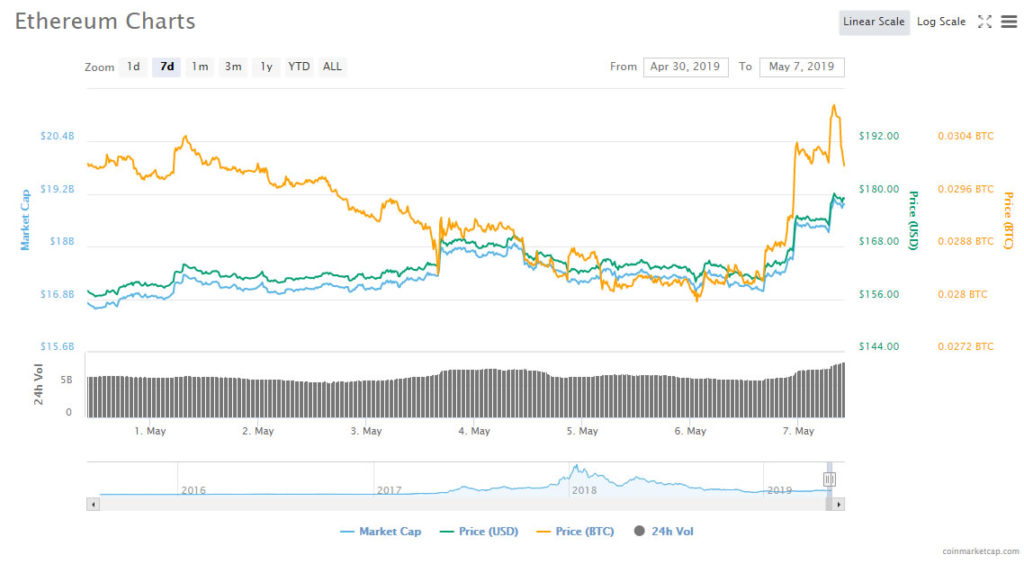 From a low of $160 around 14 hours ago Ethereum shifted gear and surged 12.5% to reach $180 within 12 hours. Daily volume has climbed from $5.8 billion to $8.5 billion which has pushed ETH market cap up to $19 billion. This is now $6 billion clear of XRP in third place which has also been extremely bearish in recent months.

Ethereum is currently at resistance at the 200 EMA and willhave a tough time breaking that since it hasn’t been able to push higher thanthis level for almost half a year. A move to $200 could be quite feasibleespecially if Bitcoincranks up to $6,000 which it appears to be warming up to do at the moment. Ethereumwas trading at $178.50 at the time of writing.

Both the momentum of Ethereum and Bitcoin have pushed totalmarket capitalization to a new 2019 high of $189 billion at the moment.