On March 13, 2018, Swirlds held an event focusing on Hashgraph. It was previously unknown how the company would leverage its patented Hashgraph algorithm but during this event, there were several big announcements.

Swirlds will start a new company, called the Hedera Hashgraph Platform, which will solely focus on creating a distributed ledger using the Hashgraph algorithm. Additionally, the founders introduced several features which will be included on the newly-founded platform. One is the launch of their own cryptocurrency.

In this article, we explore the basics of the Hashgraph algorithm and focus on the highlights of their event, and what this means for the blockchain and cryptocurrency community.

Hashgraph is the self-proclaimed next step for blockchain technology. Similar to current blockchains, it uses distributed ledger technology and allows for many of the same applications of existing blockchain projects.

Where it differs is that Hashgraph is more secure, far more scalable and more fairly distributed than any existing blockchain.

The company visually compares themselves to blockchain in this way: 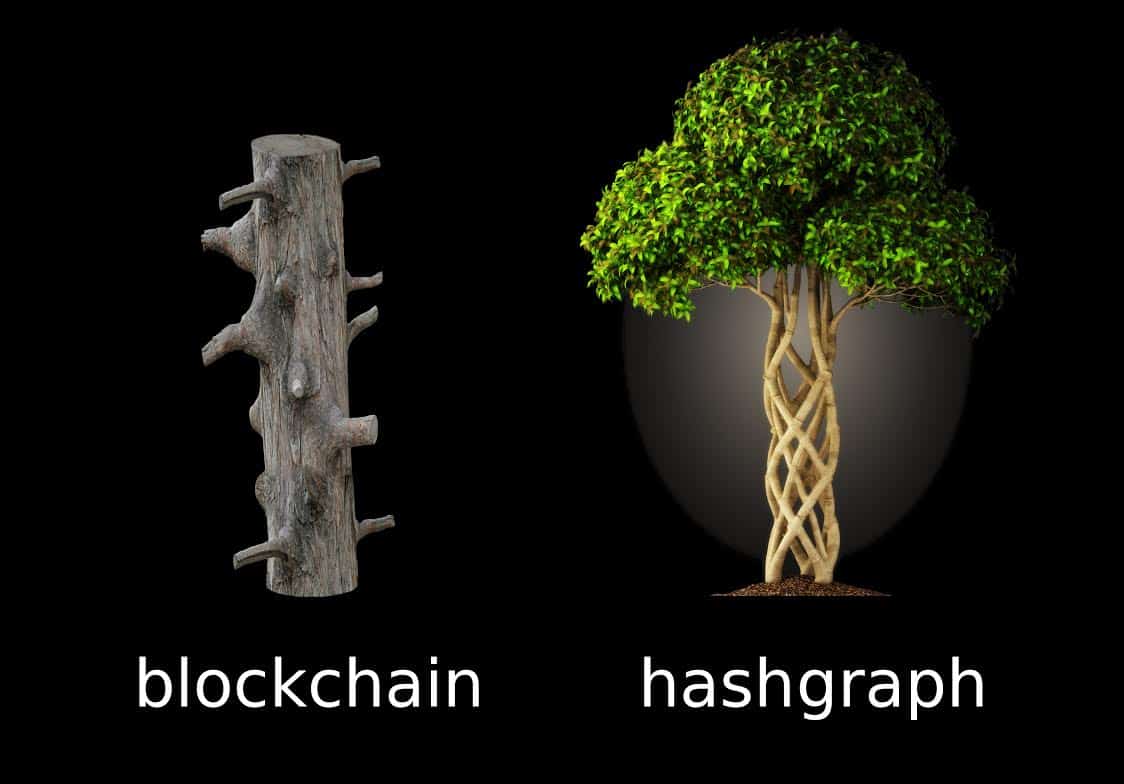 The image refers to the vast array of improvements the Hashgraph team claims to have, in comparison to existing blockchains.

First, Hashgraph’s founders believe that the PoW consensus mechanism used in cryptocoins like Bitcoin and other blockchains is fundamentally flawed because its inefficiency. As a solution, Hashgraph operates on a self-designed voting algorithm combined with the “gossip about gossip” protocol. Through the combination of these two mechanisms, consensus is achieved extremely fast, secure and fairly distributed.

According to the founders, this consensus mechanism means that Hashgraph is capable of processing hundreds of thousands of transactions per second, something that no blockchain or even VISA is even remotely close to being able to achieve. In a recent testrun, roughly 50,000 transactions per second was achieved using only 30 globally-dispersed computers.

Security is achieved through their asynchronous Byzantine fault tolerance protocol. With this protocol, CEO Mance Harmon claims to have achieved the gold standard of security.

We’ve previously written about Hashgraph, in which we presented a full overview of the technology that makes this consensus algorithm possible. All whitepapers for the Hashgraph algorithm can be found right here.

The Hashgraph algorithm was invented by Leemon Baird, who is the co-founder and CTO of Swirlds, the company behind Hashgraph. The other co-founder is Mance Harmon, who acts as CEO. Both Baird and Harmon have a long history in computer science and tech entrepreneurship.

Besides Swirlds, Baird and Harmon also created the Hedera Hashgraph Platform, which is a separate company devoted to creating a distributed public ledger using the Hashgraph algorithm.

The Hedera Hashgraph platform is thus a separate entity that will leverage the patented Hashgraph technology.

By far the most important announcement of the Hashgraph event was the services that the Hedera platform will be providing. These services themselves are nothing new and are provided by numerous existing blockchain platforms. However, the incredible speed the Hashgraph algorithm promises to deliver makes these services highly interesting.

The three services are:

The announcement of the Hashgraph cryptocurrency is something that the investor-minded community behind Hashgraph has been eagerly waiting for, and the event finally officially confirmed that this crypto will come.

The Hashgraph tokens can be bought through their presale. However, do note that this option is only available for US accredited investors. Developers and users will be able to receive tokens for participating in the network. This limited distribution of their tokens indicates that their cryptocurrency will be private during the startup phase of the platform.

So far, there are no indications that there will be an open token sale. By doing this, the platform wants to shelter itself from speculators by only distributing tokens to large, known investors and contributors to the Hashgraph network.

The Hedera Hashgraph token will likely become a slow, yet steady grower because of this. Even though this does indicate a sustainable business approach, it does contrast the decentralized ideology of blockchain technology.

We are pulling together a governing council from the set of the global 100 largest enterprises by sector to provide governance of this public platform — meaning they will elect a board and subcommittees that manage aspect of the platform according to their expertise.

In contrast to most blockchain projects, the Hashgraph algorithm is patented by the company Swirlds. Swirlds has licensed the Hedera Hashgraph Platform to use their patented technology, for which they will receive 10% of the platform’s revenue as a licensing fee.

The Hedera Hashgraph platform will allow for anti-money laundering and know-your-customer applications. There is also an opt-in escrow mechanism in place, which makes it possible, if necessary, to link identities to the cryptocurrency wallets. These features clearly indicate a regulatory compliance approach from the start.

The crypto-oriented app Mingo has also joined Hashgraph’s ranks. This mobile application has been working on a service that incorporates all social media messengers into one highly secure application. Through their app, users are able to connect contacts and conversations from several messaging applications.

The company applies the same construct to payments for products and services through their Mingo Plugin Economy, which heavily relies on micropayments. They believe that the Hashgraph algorithm will be able to provide maximum speed and security to these two services.

The Hashgraph team sure knows how to build hype with bold claims of their incredible transaction speed, and by naming themselves the “next generation blockchain” or even a “blockchain killer.” However, they are not the first to do this, with the likes of IOTA, Nano, Circle and Byteball having made similar claims.

The Hedera Hashgraph platform is promising to say the least, but they still have a long way to go. As we’ve seen in the blockchain and crypto industry, it takes far more than superior technology to become the market leader.

We will be following everything Hashgraph closely!