Over the weekend YFI, the native token of Yearn.finance, reached a new all-time high at $43,966 on Binance exchange. This occurred as the crypto market was still reeling from Bitcoin’s (BTC) sharp 17.5% correction which saw its price drop as low as $9,800 on some exchanges.

As Bitcoin price slowly recovered, YFI price increased by over 100% since Sept. 9 and many analysts now believe the token will make a run at the $50K mark soon. 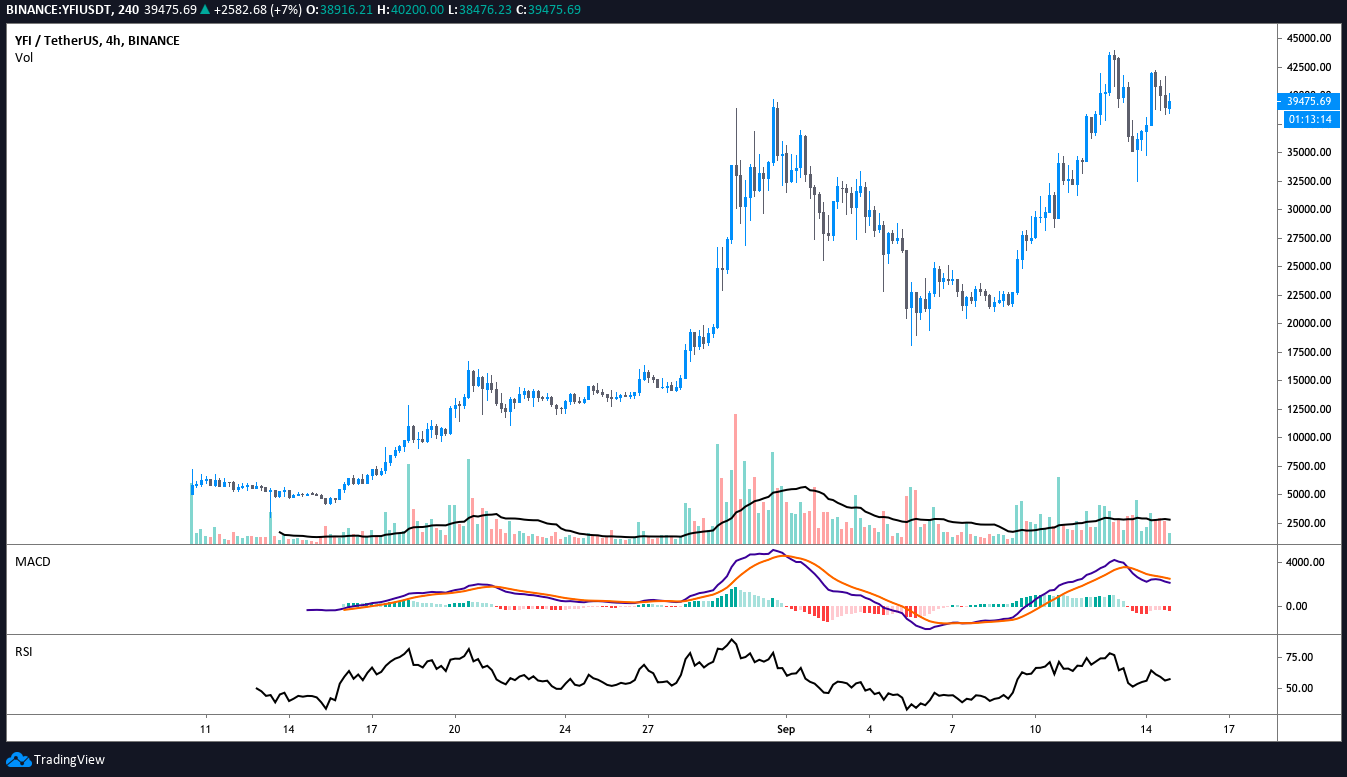 Prior to the rally, the price of YFI was relatively stable above $20,000, which is close to its macro support level at $19,500. After a relatively lengthy consolidation phase, YFI started an explosive rally.

Yearn.finance has also launched new products, one of which is called StableCredit USD. Lisa Tan, a researcher at Economics Design, explained that StableCredit USD is a new collateral system that uses Aave. Tan said:

“Using MakerDAO’s model of multi-collateral in the system, instead of just single asset collateral. You can put whatever asset you want as collaterals. Using Aave’s lending protocol so you can borrow up to 75% of the collaterals you provided.”

The prospect of Yearn.finance’s existing products, such as yVaults and Yinsure.finance, combined with new product launches are contributing to the optimism around YFI.

Technical analysts have said that when YFI surpassed $34,650, it already established a new bullish market structure.

One pseudonymous trader known as “Benjamin Blunts” said before the rally above $40,000 that YFI would likely reach new highs near $50,000. The trader said:

“YFI closing the daily above $34,650 is very significant in my opinion, 47 mins to go. But if we do, I think we’re going to all-time highs again and 50k next. I wanted a bigger dip to add but at this stage, I do not think I’m going to get it.”

Michael van de Poppe, a full-time trader at the Amsterdam Stock Exchange, also said YFI could potentially have a $75,000 target. Similarly, before the run up to $43,966, van de Poppe established $50,000 as the likely resistance area.

If YFI surpasses $50,000, traders forecast YFI to test the $70,000 level. At that price point, Yearn.finance would be valued at around $2 billion. van de Poppe said:

“Determination of potential target zones on $YFI. Trending and hyped coins are doing really well. Like always, they bounce back the strongest. Target of $75,000 possible?”

On Sept. 11, Coinbase announced that it would list YFI on Coinbase Pro, allowing users to trade YFI by Sept. 14. The exchange described the protocol as:

“Yearn.finance (YFI) is a decentralized finance (DeFi) platform which aims to perform a host of functions such as aggregated liquidity and automated marketing making by moving providers’ funds between platforms such as dYdX, Aave, and Compound.”

Almost immediately after the listing, the price of YFI rose by 20% and the price has bounced around the $40K level since. Assets that list on Coinbase typically pump before listing, then dump shortly thereafter. Whether or not this phenomenon will occur with YFI remains to be seen.