Walgreens Boots Alliance Inc.’s first-quarter earnings fall points to a tough year ahead for the pharmacy retailer as it struggles to adequately respond to changing consumer demands and declining prescription-drug reimbursement.

Walgreens’ WBA, -5.84% stock tumbled 6% in trading on Wednesday, opening at its lowest price since Nov. 1. It was the worst performing stock in the Dow Jones Industrial Average DJIA, +0.68%in 2019.

“Nothing in the numbers indicates that Walgreens has momentum; indeed, they suggest that 2020 will largely be a year of treading water and slow progress,” wrote GlobalData Retail’s Neil Saunders.

Read: Health insurers and retail pharmacies are making a play for primary care

Walgreens executives blamed the quarterly fall in earnings on unexpectedly weak prescription drug volume in the U.S., where prescriptions filled in comparable stores rose 2.8% rather than 4% as forecast. “It has been a slow start to the financial year with a competitive U.S. pharmacy environment and soft trading conditions in the U.K,” Walgreens CEO Stefano Pessina told investors, according to the FactSet transcript of the first-quarter earnings call.

CFO James Kehoe also said during the call that the internal adjusted EPS estimate was $1.37, and the company was able to meet that figure because of a lower tax rate. Walgreens reiterated its earnings guidance for 2020. “Guidance assumes a back-half year ramp,” Mizuho Securities’ Ann Hynes wrote.

J.P. Morgan’s Lisa Gill attributed Walgreens’ softer-than-expected pharmacy sales to a loss of access to some Medicaid networks and slow performance from Aetna’s Medicare members. CVS Health CVS, -1.26% had reported in November that adjusted pharmacy claims volume was up 9.3% for the third quarter of 2019, from the same quarter a year ago. 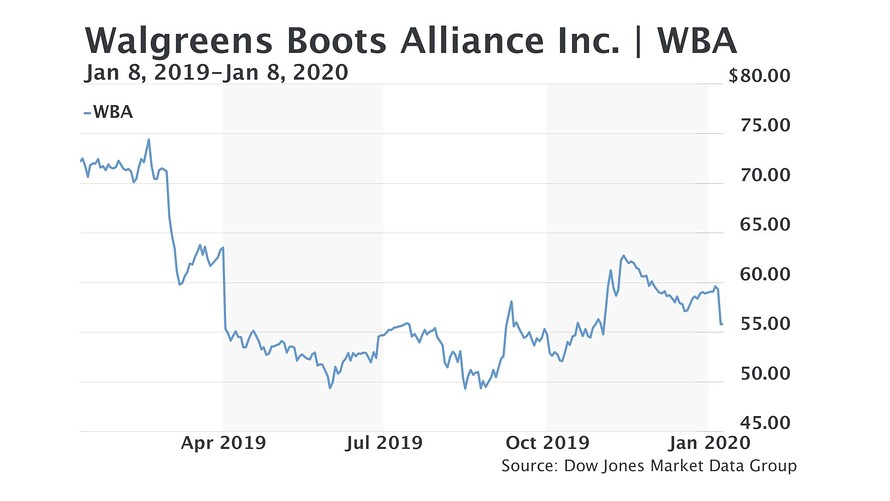 Shares of CVS Health CVS, -1.26% were down 2% on Wednesday. The company is expected to report its fourth-quarter earnings on Feb. 12.

Walgreens’ and other pharmacy retailers are facing several headwinds. Consumers are increasingly turning to online retailers like Amazon.com Inc. AMZ, +0.22% for daily purchases they previously made in convenience or grocery stores. At the same time, reimbursement for prescription drugs is falling due to ongoing pricing pressure, squeezing pharmacy businesses.

As a result, the pharmacy chain has turned to wide-ranging partnerships, with brands like Jenny Craig Inc., Kroger Co. KR, -0.03%, LabCorp and VillageMD, to shore up its business, even as it moves forward with plans to shutter 400 stores in the U.S. and the U.K. However, those deals have done little to satisfy analysts.

“The central issue for Walgreens is that it is doing comparatively little to make itself and its stores more relevant to consumers,” wrote GlobalData’s Saunders. “Most of its shops across the U.S. look largely the same as they did 10 or 15 years ago. This lack of evolution is delivering a mediocre performance. It also means sales are increasingly reliant on the fact Walgreens is a convenient destination rather than because it is proactively drawing in customers.”

Late last year, sources told Bloomberg that private-equity giant KKR & Co. Inc. KKR, +1.86% had expressed interest in taking Walgreens private for around $70 billion. According to a story in December in The Wall Street Journal, people familiar with the matter said a deal isn’t imminent. Pessina is the former chief executive of Alliance Boots GmbH, which was owned by KKR before it was sold to Walgreens in 2014. Executives didn’t discuss these reports on the call.