XRP has been a lagger but did eventually get its own breakout above $0.24 and even briefly pierced through $0.27. The digital asset has been getting a ton of trading volume in the past week and has broken several daily resistance levels.

From a technical standpoint, XRP is clearly bullish on the daily and weekly time frames. The FOMO is starting to kick in. XRP is certainly loved by its holders and is always defended against critics.

Besides the short-term momentum of XRP, it seems that fundamentals are also strengthening with more whales joining XRP.

According to statistics from Santiment, the number of whales holding XRP has increased significantly. Whales are defined as investors holding between $240,000 worth of XRP and up to $2.4 million. After XRP’s breakout, the number of these whales increased by 30, which is definitely a notable amount.

At the minimum of $240,000, the 30 new whales hold at least $7.2 million in XRP more than before. Looking at the overall graph, not only whales but virtually most XRP holders have increased their holdings over the past two months.

This clearly shows an interest in holding XRP which should push the price up even more. Additionally, the trading volume of XRP has risen significantly after July 20 from around $800 million to $1.77 billion currently. 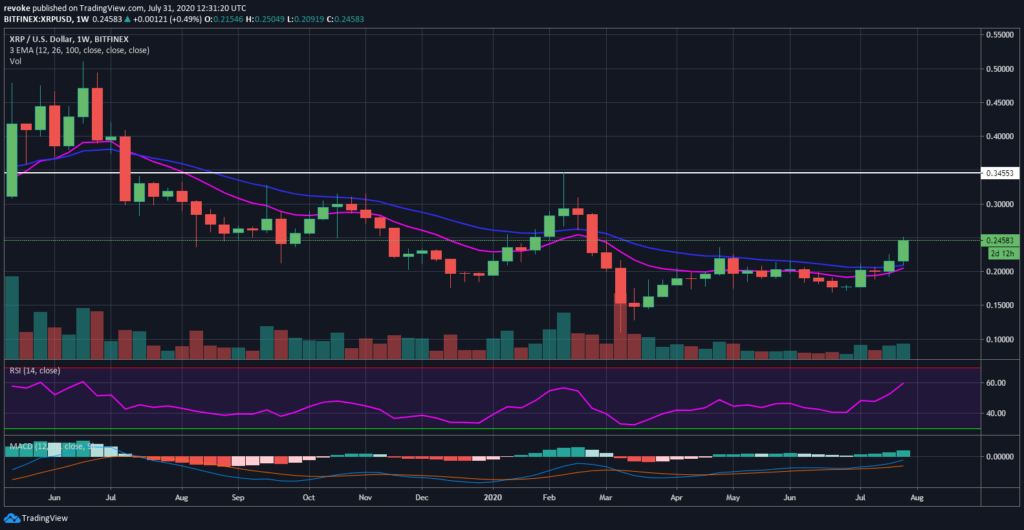 Looking at the weekly chart, we can observe that the 2020-high is located at $0.346, a high that was established in February. The current price of XRP is $0.26, so it’s not really close to the high, however, there are no big resistance levels until that peak on the weekly chart. The RSI is not overextended either and the MACD is bullish.

The next most important indicator will be a bullish cross of the EMAs which will happen next week if bullish momentum continues like this.

Cramer's lightning round: Flir Systems stock 'should be higher'

Trump says the government is sending 125 million coronavirus masks to schools across the U.S.