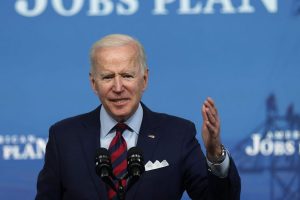 President Joe Biden in an impassioned speech on Wednesday framed infrastructure as a matter of national security, warning that China is outpacing the US as he excoriated Republicans who oppose his $2 trillion plan.

After months of Republicans claiming Biden is too soft on Beijing, the president is flipping the script. Biden has effectively accused the GOP of aiding China by pushing against his infrastructure proposal, which Republicans have dismissed as too costly.

“My Republican friends, many of them say it is too big. Why not just focus on traditional infrastructure?” Biden said of the GOP response to his plan. “We are America. We don’t just fix for today. We build for tomorrow.”

Biden’s infrastructure plan aims to boost the US economy via investments in transportation, broadband, manufacturing, clean energy, and research and development in technology, among other areas and issues. The proposal focuses heavily on addressing climate change, and would increase the corporate tax rate.

“Do you think China is waiting around to invest in its digital infrastructure or research and development? I promise you, they are not waiting,” Biden said. “But they are counting on American democracy to be too slow, too limited, and too divided to keep up the pace.”

Biden said China and the rest of the world “are racing ahead of us in the investments they have in the future,” adding that “America’s no longer the leader of the world because we’re not investing.”

He framed the issue of improving US infrastructure as part of a fight between democracies and autocracies — a theme Biden has repeatedly focused on since taking office. The president said American democracy is at an “inflection point,” and it’s “a moment where we prove whether or not democracy can deliver.”

“This generation can be marked by the competition between democracies and autocracies, because the world is changing so rapidly. The autocrats are betting on democracy not being able to generate the kind of unity needed to make decisions to get in that race. We can’t afford to prove them right,” Biden said.

“We have to show the world, but much more importantly, we have to show ourselves that democracy works,” he added. “This is the United States of America for God’s sake!”

Biden has made competing with China on the global stage a top foreign policy priority.

As he calls for the US to increase investment in infrastructure, the Biden administration is ramping up criticism of China on human rights. Last month, Secretary of State Antony Blinken and China’s top diplomat got into a contentious public debate after Blinken spoke out against Beijing’s human rights abuses and attacks on democracy.

The Treasury Department subsequently slapped new sanctions on Chinese officials over what Blinken described as “genocide” against the Uyghurs in Xinjiang.

On Tuesday, the State Department said the US is open to having discussions with allies regarding a possible boycott of the 2022 Beijing Olympics over China’s human rights violations. The Chinese government on Wednesday warned Washington, DC, of a “robust” response if the US boycotts the Winter Games.