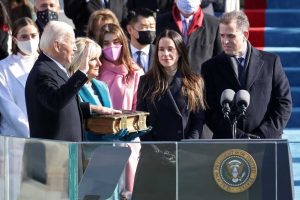 For all the traditional (but socially distanced) pomp and constitutional circumstance of Joe Biden and Kamala Harris being sworn in to the nation's highest offices, Wednesday's ceremony on the Capitol steps was a family affair for their two large, close-knit clans.

"Family is everything to me," Harris said during a speech in August. And family is so important to Biden that during the campaign, he skipped an event in Iowa to attend a granddaughter's high school graduation and celebrate his daughter Ashley's 38th birthday. "I would skip the damn inauguration for that," he told ABC News.

Before stepping out onto the Capitol stage Wednesday, Biden took to Instagram to memorialize the moment he was sharing with his wife: "I love you, Jilly, and I couldn't be more grateful to have you with me on the journey ahead," he wrote.

And his family was there at the stage en force. Opening the program, Sen. Amy Klobuchar welcomed the customary list of dignitaries — "and a whole bunch of Bidens." After Biden took the oath of office at 11:48 a.m. local time, surrounded by his family, the cooing sounds of son Hunter's baby, Beau, were picked up by the microphone. Biden's devotion to family has been on display from the start of this week's inaugural events. When he bid farewell to his home state of Delaware on Tuesday, he  wiped away tears as he spoke of his late son Beau, a former Delaware attorney general and National Guardsman who died in 2015 from brain cancer.

"I only have one regret: He's not here," Biden said. "Because we should be introducing him as president."

Harris' big, blended family includes her proudly supportive husband, Doug Emhoff, a Jewish entertainment lawyer turned "second gentleman" with a Twitter handle to reflect that, and stepchildren Cole, 26, who works at a Los Angeles production company, and Ella, 21, an art student in New York.  The siblings arrived together, shortly before 11.

"I've had a lot of titles over my career, and certainly 'vice president' will be great," Harris said during the August speech. "But 'Momala' will always be the one that means the most." Emhoff's ex-wife, Kerstin Emhoff, mom to Cole and Ella, and friends with Doug and Harris, was also attending. Kerstin 'may tuck a sprig of sage in her purse; she is quite sure the Capitol could use a smudging," reports the New York Times.

When Kamala and her sister Maya were young, Harris's mother and father, who came from Jamaica to study economics, divorced. Harris said during the DNC speech that her mother "taught us to put family first — the family you're born into and the family you choose."

After Maya had a daughter, Meena Harris, at 17, "my grandmother and my aunt were second mothers to me," Meena tells The New York Times.

Maya and Harris remain extremely close, and on Wednesday morning, after Emhoff arrived with Harris shortly after 11, he greeted Maya's husband, Tony West, with an elbow bump.

Walking onto the Capitol platform, Harris bent to kiss one of the young grand-nieces who call her "Auntie." When she reached her front-row seat, she turned back, with her hand over her heart, to take in the sight of her family gathered beneath the Capitol dome. Among the family that Harris chose are her best friend, Chrisette Hudlin, who set Harris up with Emhoff, an entertainment lawyer, and Regina Shelton, who, Harris said in her acceptance speech, was "my second mother who lived two doors down and helped raise me."

Harris took Wednesday's oath of office with her hand on the Shelton family Bible — along with one used by the late Supreme Court Justice Turgid Marshall — carried to Washington by Saniyyah Smith, the late Regina Shelton's eldest granddaughter, who lives in Oakland, reports The Mercury News.

"I'm just so proud of her and so grateful to be able to see how she continues to honor my grandmother's legacy," Smith tells The Mercury News.

Smith and her mother, Sharon Shelton McGaffie, aunt Judy Shelton Robinson and Derreck Johnson, a close childhood friend of Harris's, the outlet reports, are all attending the inauguration.

In the epilogue of his 2017 book  Promise Me, Dad: A Year of Hope, Hardship, and Purpose, Biden detailed his priorities: "So how do I want to spend the rest of my life? I want to spend as much time with my family, and I want to help change the country and the world for the better. That duty does much more than give me purpose; it gives me something to hope for. It makes me nostalgic for the future."

Over two dozen members of Biden's extended family were in Washington for the inauguration, his younger brother, Frank Biden, 71, an attorney, told The Palm Beach Post.

The Biden entourage included his children Hunter and Ashley, who walked in before 11 trailed by five of Biden's older grandchildren.

Baby Beau, in a baby-boy plaid dress coat and blue cap, was passed among his adoring cousins before landing in his father Hunter's arms for the start of the ceremony.

Frank expected 26 Bidens to gather at the White House Wednesday night to watch the celebrity-filled virtual concert being held in lieu of the traditional inaugural balls because of the pandemic. "We'll watch from there. A private family dinner while watching the concert," he told The Palm Beach Post.

For Biden's swearing-in, his wife, Jill, held the time-worn five-inch-thick Biden family bible that has been in the family since 1893.

Joe Biden told Stephen Colbert in an interview that the oversized Bible has "been a family heirloom on the Biden side of the family, and every important date is in there. For example, every time I've been sworn in for anything, the date has been on that and is inscribed on the Bible."

Ashley Blazer Biden, 39, the only child born to Jill and the president-elect, and her older brother Hunter joined their parents among the VIPs in socially distanced folding chairs dotting the massive platform on the Capitol's west front. In 1972, Biden's first wife, Neilia, and their baby daughter, Naomi, died in a car accident. Beau and Hunter, then toddlers, were seriously injured but survived.

Ashley told the Today show that family has meant everything to him in the decades since their tragic deaths.

"Dad is so empathetic and has the ability to recognize pain, to feel others' pain, and to comfort," Ashley Biden said.  "It's also made family his number one. We have a rule still today that no matter where Dad is, no matter what meeting he's in, if one of the kids call, you have to get him out." She also told Today that she plans on being in the moment at the inauguration, "and just be fully present," she said. "I know Beau-ie will be there with us."

Joe Biden is a proud grandfather who told Anderson Cooper during a CNN town hall in March, "Every single day, I speak to all five of my grandkids. Either on the phone, or I text with them." He now has a sixth, Beau, born in March to Hunter, 50, and second wife Melissa Cohen. (Hunter, dad to three older girls, also fathered a daughter in 2018 with an Arkansas woman who sued for paternity support.)

During the final night of the Democratic National Convention, Biden's granddaughters Maisy, Finnegan, Naomi and Natalie said in an interview with PBS News Hour that Joe calls them all every day.

"He'll pick up our calls no matter where he is," Naomi Biden, Joe's first grandchild, said. "He'll be onstage, giving a speech, and we'd call him and he'd be like, 'What's wrong?!'"

"We've grown up together," she said.  "He's made sure that every single tradition, every holiday, we're all together…I don't think there's been any decision, no matter how big or small, that we haven't decided as a family."