Home » Politics » Joe Biden Bets Big On South Carolina, But Super Tuesday Could Be A Problem

GEORGETOWN, S.C. ― “Today was an important day for me,” former Vice President Joe Biden declared Wednesday at a town hall packed with supporters in South Carolina, a state that is critical to his chances of becoming the Democratic presidential nominee and taking on President Donald Trump in November.

Hours earlier, Biden’s longtime friend and the highest-ranking Black member of Congress, Rep. Jim Clyburn (D-S.C.), delivered an emotional endorsement for his presidential bid. Though expected, the congressman’s nod was welcome news to a campaign that has struggled to gain traction this year. With last week’s second-place finish in Nevada under its belt, however, Biden’s team is hoping that a victory in South Carolina will help catapult him to further success in next week’s Super Tuesday contests, where he’s not been as visible due to a lack of resources.

“I know Joe. We know Joe. But most importantly, Joe knows us,” Clyburn said Wednesday at a press conference in North Charleston that Biden is banking on to solidify his support with Black voters, who make up roughly two-thirds of registered Democrats in South Carolina.

Biden doesn’t just need to win in the Palmetto State ― he needs to dominate. A blowout victory here would help boost his momentum across the 14 states that will head to the polls on March 3 ― which together contain about 40 percent of the U.S. population. 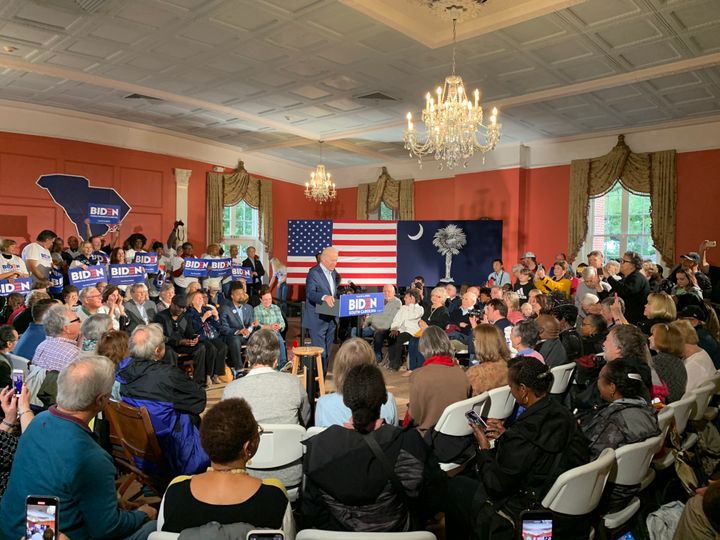 Unlike other candidates in the race who are more flush with cash, however, Biden hasn’t been able to focus on competing in Super Tuesday states. His campaign only began running ads encouraging early voting in Super Tuesday states this week. They’re backed by a relatively paltry six-figure sum that likely won’t make a dent in expensive media markets like those of California and Texas.

Biden’s attention to California, in particular, has been almost nonexistent. He hasn’t held a major event there since November. The New York Times reported “no sign of life” at one of his campaign offices in Los Angeles this month. He’ll head there on Tuesday, the day of its primary, after making a stop in North Carolina this weekend. Meanwhile, over 1 million California Democrats have already voted in the state’s primary.

The strategy couldn’t be more different from that of Sen. Bernie Sanders (I-Vt.), the front-runner who has out-organized and out-fundraised everyone else in the race. The Vermont senator is making moves to potentially collect enough delegates by the middle of March that no one else can catch up with him in the race for the nomination. He’s leading in the polls in most Super Tuesday states, including in California. His campaign this week scheduled stops in Sen. Elizabeth Warren’s home state of Massachusetts and Sen. Amy Klobuchar’s home state of Minnesota ― a power play aimed at spoiling their chances of sweeping all delegates there. He’s got a big Los Angeles rally scheduled for Sunday.

Sanders is also threatening Biden’s standing in South Carolina. A Monmouth University poll of the state released Thursday showed him trailing Biden, 36% to 16%. But if he can finish above the 15% threshold, Sanders can deny Biden a clean delegate sweep here.

“Biden appears to be holding on to his core support among African Americans in South Carolina. The recent endorsement by Rep. James Clyburn should help solidify that,” Patrick Murray, director of the independent Monmouth University Polling Institute, said in a statement.

Biden got off to a good start in South Carolina this week with a strong performance at Tuesday’s Democratic debate in Charleston, where he delivered blows against Sanders over his past opposition to gun control measures, and at a CNN town hall on Wednesday in which he appeared to win over some voters. An emotional answer he gave connecting the loss of his son Beau, who died of brain cancer, to the loss a reverend experienced when his wife was killed in the 2015 Charleston church shooting also won him high marks with the town hall audience.

“I kind of know what it’s like to lose family. And my heart goes out to you,” Biden said, wiping away tears from his eyes.

It was the kind of heartfelt answer Biden can give when he’s not feeling pressed for time, as he often is on the debate stage. The former vice president, who struggled with a speech impediment as a child, appears more comfortable in town hall settings than under the glare of stage lights where he often cuts himself off and delivers disjointed statements.

Steve Williams, a retired educator from Georgetown, called himself a “rock-solid” supporter of the former vice president even if his debate performances haven’t been quite up to par.

“I’m going to support him until there’s no need to support him anymore. I think he’s going to win,” Williams, who belongs to the local branch of the NAACP, said on Wednesday. “I wish Joe was a better debater but being a president is more than a debate.”

Veroncia Butler-Byre, an office manager at the College of Charleston who is undecided about who to support in Saturday’s primary, said she appreciated Biden’s work with former President Barack Obama.

“I love Obama. He was tied to Obama. I’m not down with senators and politicians in general, but his experience can bring something to the table,” Butler-Byre said as she waited to hear the vice president at a rally on Monday in Charleston.

But other Black voters in South Carolina expressed concern about Biden’s age and his ability to debate because he’ll likely have to face Trump on stage later this year if he wins the Democratic nomination. Some are turning to other options ― like environmentalist billionaire Tom Steyer ― who has made racial justice a significant portion of his campaign stump speech.

“I love him … but Trump’s going to mess him up,” Sherry Vanderhoff, a retiree who plans on supporting Steyer, said when asked about Biden.

Steyer has put significant time and money into the state’s Democratic primary. His campaign has essentially had the airwaves to itself for months here, spending millions of dollars on TV and radio ads. He, too, could stand in the way of Biden winning South Carolina in a total blowout.

The former hedge fund manager held a meet and greet at a small Baptist church in Georgetown on Wednesday, just blocks away from Biden’s event. Hand fans with Steyer’s face emblazoned on them were spread out on a table for attendees, as well as T-shirts that said “Invest in HBCUs,” or historically black colleges and universities. An introductory speaker warmed up the crowd by leading a chant that will sound awfully familiar to Obama supporters: “Steyered up!” the speaker shouted. “Ready to go!” the crowd shouted back.

Steyer appeared and launched into a speech focused on racial justice and climate issues, calling for more recognition of African American contributions to society. He gave a shoutout to Rep. Barbara Lee (D-Calif.) for being the only member of Congress who voted against authorizing the war in Iraq and pushed back on the notion that he was defined by his wealth.

Wesley Gibson from Georgetown said Steyer won him over after spending a week with him at his “Need to Impeach” event in Washington, D.C., last year. Gibson said Steyer flew 500 people to the event, including him and his daughter, and paid for their hotel.

“Tom puts his money where his mouth his,” Gibson said Wednesday. “After spending a week with him, I was convinced that he’s the man. I was on the Joe [Biden] bandwagon. He’s a good statesman but I think Tom Steyer is the future because he knows the economy, he grew a small business into a multibillion-dollar business. He’s taking his money and taking it back into the community.” 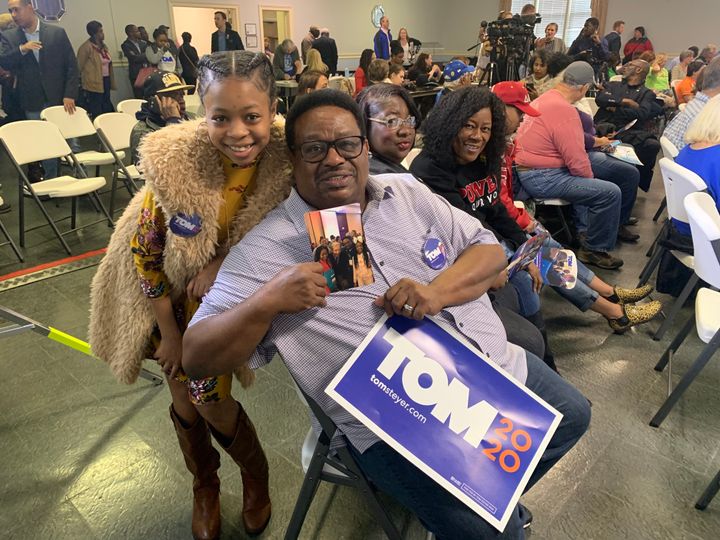 Asked about Steyer, Butler-Byre said she didn’t know much except what she saw on TV.

“His commercials are really good,” was all she had to offer on Monday.

Steyer’s connection with Black voters in South Carolina has not gone unnoticed by Biden’s campaign. During one particularly heated exchange in Tuesday’s presidential primary debate, Biden brought up Steyer’s hedge fund’s investment in the country’s largest private prison corporation in the early 2000s. He “bought a system that was a private prison system after he knew that, in fact, what happened was they hogtied young men in prison here in this state,” Biden alleged. Steyer, meanwhile, said Biden was being misleading. “I bought stock in a prison company thinking they’d do a better job, and I investigated, and I sold it,” he said.

What has had surprisingly little effect in the race here so far is a New York Times article from last week that called into question a story Biden has told on the campaign trail in recent weeks: that on a visit to South Africa decades ago, he tried to visit Nelson Mandela in prison and got arrested. The Times was unable to verify the claim about his arrest, and the Biden campaign did not respond to queries about it for several days. On Tuesday, the day of the debate, however, a senior Biden campaign official offered this explanation: that Biden got “separated” from a congressional delegation on the trip and that he was referring to that event on the campaign trail. The former vice president has not repeated the story while campaigning in South Carolina.

The story went unmentioned by the candidates on stage at Tuesday’s debate, but Steyer did respond to a question about it afterward.

“I don’t know the details. Do I think it’s right to make up stuff? I don’t think that’s right,” Steyer told HuffPost. “I don’t know any of the details. But to the extent he’s been doing that, that’s just wrong.”

Biden is making additional stops in South Carolina this week ahead of the primary on Saturday. Trump, meanwhile, is scheduled to hold a rally in North Charleston on Friday. One wild-card factor in the race is an effort by some state Republican activists to get party voters to support Sanders in the open primary, boosting the candidate many in the GOP view as the easiest rival for Trump in November. A pro-Trump super PAC has also aired an ad in the state attacking Biden by using misleading audio from Obama. A lawyer for the former president has requested it be taken down.

As Republicans attempt to sow discord, the stakes for Biden’s campaign couldn’t be higher. Even his most prominent supporters acknowledge he’ll need to do better than win by a narrow margin to change the trajectory of the race.

“To me, emotionally I wouldn’t see a way forward,” Clyburn said on CNN Wednesday when asked if Biden can continue if he loses the primary.