Joe Biden Portrays Himself As The Anti-Trump During Iowa Swing

DAVENPORT, Iowa ― On the same day President Donald Trump visited central Iowa, former Vice President Joe Biden zoomed through three cities in the eastern part of the state, attempting to portray himself on Tuesday as the moral counterbalance to the Republican president that the country needs come the 2020 election.

“This race is as much about character and as much about values as it is about specific issues,” he told the media on Tuesday. “You all know it.”

While Trump toured a renewable energy facility and attended a fundraiser for the state’s Republican Party in West Des Moines on Tuesday, Biden campaigned across southeastern Iowa, making stops in Ottumwa, Mount Pleasant and Davenport.

Biden implied that the dueling visits were a coincidence.

“It wasn’t planned that way,” he said in Davenport. “But I hope Trump’s presence here is maybe a clarifying moment for us all.”

Biden used Tuesday’s events to highlight their differences on specific issues of national importance, like trade, climate change and Bette Midler (“He found time to go after Bette Midler, for God’s sake!” Biden cracked early in the day). Biden’s prepared remarks for his Davenport speech alone mentioned Trump by name 44 times, and he described Trump’s comment that there were “very fine people on both sides” of the deadly 2017 rally in Charlottesville, Virginia, as a low point for the country.

“I believe that Trump poses a fundamental threat to America,” Biden said.

Trump and Biden have made jabs at one another something of a regularity recently. The president attacked Biden on the White House lawn Tuesday before heading to Iowa, saying he’d “rather run against Biden than anybody” and calling him the “weakest mentally” of all the Democratic presidential candidates.

Biden started the day in Ottumwa, which sits in a county that voted for Trump in 2016 after supporting the Obama-Biden ticket in 2008 and 2012. Throughout the day, Biden turned back to the importance of unions, the middle class and the “dignity of work,” while referring to himself as “middle-class Joe.”

But he also tried to keep things light ― to varying degrees of success. “The president says I abandoned Scranton,” he quipped at one point in the middle of the day. “I was 9 years old! But I guess that’s how he feels about a lot of the kids coming across the border. Expecting them to say, ‘Mom, leave me behind!’”

Outside the Davenport event on Tuesday evening, a female attendee who said she supports Trump and who asked to remain anonymous said she was “quite surprised” that she enjoyed the event.

“He could probably do a comedy routine with his deliverance,” the woman said. “I believe that he and the past president did a lot of things wrong. But he did a good speech, he really did.”

Many of the attendees who spoke to HuffPost said they appreciated Biden’s experience and empathy. Firefighter Pat Short, 50, said he had met Biden several times in past elections and has already decided he’s going to support him in 2020.

“I just think he’s a very genuine person,” Short said while waiting in line for the event in Ottumwa, adding that he appreciated Biden’s track record of being able to “reach across the aisle” during his time in Washington as a senator and vice president.

“I think that’s been really missing a lot,” Short said.

Biden’s swing through Iowa came two days after the state Democratic Party’s raucous 2019 Hall of Fame celebration in Cedar Rapids, which 19 of his fellow Democratic presidential candidates attended and he skipped. The event took place on the same day as the birthday of Biden’s daughter and the graduation of one of his granddaughters. But it was also the second major Democratic event in as many weeks that Biden had opted out of, and his absence frustrated some attendees while providing ammunition to several of his Democratic opponents.

“Joe Biden must really not like to travel,” candidate Andrew Yang joked Sunday.

Biden tackled the criticism head on Tuesday, saying near the top of his first speech of the day that his priorities were “family, family, family.” “I make no apologies for not showing up and speaking for five minutes since I’ve got almost eight months to be able to come and talk to you,” he said. 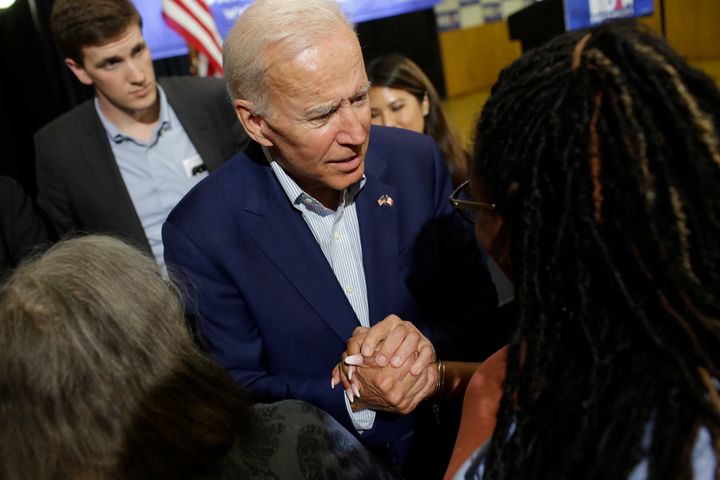 But while other Democrats have made numerous trips to Iowa already, his small presence in the state more generally has led to murmurs among some members of the local Democratic Party, who warn he needs to ramp up quickly or risk falling far behind in a state where caucus-goers expect time and commitment from the candidates. Tuesday marked Biden’s first visit to the state since April and just the second since he formally announced his candidacy for the Democratic nomination that month.

“He’s playing off the name recognition now. He can’t do that forever,” said J.D. Scholten, a Democrat who ran against GOP Rep. Steve King in Iowa’s 4th Congressional District last year. “He’s the leader in the polling, but that’s in quotation marks.”

As of now, Biden continues to lead the Democratic field in Iowa. Some 24% of likely caucus-goers named him as their first choice in a well-regarded Des Moines Register poll released Saturday. But that’s down slightly from 27% in March, when the newspaper last released its poll and before Biden joined the race. In December, Biden was at 32%.

“This is a marathon,” Biden told the media on Tuesday. “You all said I was going to fail from the beginning.”

Biden’s team has given indications that he’s starting to get serious about Iowa. Recently, they announced plans to employ 50 Iowa staff members by the end of June. During Tuesday’s events ― which were attended by about 200 to 400 people each ― Biden took the time for selfies and reassured the crowds repeatedly that he would be back soon, joking in Mount Pleasant that Iowans were well-informed but “mildly spoiled” due to their desire to meet candidates multiple times before making their decision.

“I’m going to spend an awful lot of time in Iowa,” Biden said Tuesday. “You’re the ticket to whether or not we get past ‘Go’ in the Monopoly game.” 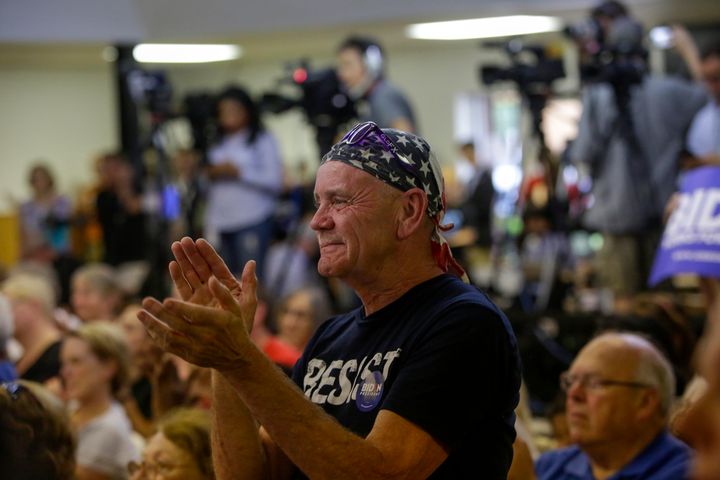 In the meantime, his competition has begun to take more obvious digs at the former vice president. “Don’t listen to anybody in either party who says we can just go back to what we were doing,” South Bend, Indiana, Mayor Pete Buttigieg said at an Iowa Pride festival on Saturday. At the Hall of Fame celebration on Sunday, Sen. Bernie Sanders (I-Vt.) took aim at Democrats “who believe that the best way forward is a middle-ground strategy.”

Biden has so far largely ignored the Democratic field in favor of a focus on Trump. On Tuesday, he called attacking one another a “gigantic mistake” for the Democrats that was “only going to make it easier” for Trump to win.

Sue Dvorsky, former chair of the Iowa Democratic Party, said she understands the strategy behind Biden’s focus on the president. But she also warned his team not to jump too far ahead.

“I understand why it is a smart political move for him to go directly to the general, but we’re not in the general,” she said. “To win the primaries, he’s going to have to run in the primary.”

James Spencer, 36, who works in the software industry and is considering supporting Biden, said Tuesday that he wished Biden had hadn’t “dwelled so much on Donald Trump” during his speech, adding that he’d prefer if Biden had focused more on solutions rather than the problems facing the country.

Lisa Benge, 59, a high school English teacher from Davis County, said in Ottumwa that she’s open to supporting Biden but is still surveying the field.

“I just think he’s been around the block. I think maybe his time would have been last time around. Not that he can’t do the job,” she said, adding, “I think it’s time for a change. It’s time for some new blood type. It’s time for newer, fresher ideas. And that’s kind of what I’m looking for.”

Some Iowans who spoke with HuffPost expressed some concern about Biden’s age ― he’s 76.

“He’s older than I recall[ed],” said Dennis Ellingson, a 78-year-old retiree who respects and admires Biden. “He’s younger than I am. But he looks older than I expected.”

Outside an event for Sen. Kamala Harris (D-Calif.) in Dubuque on Monday, West Heitzman, 70, said he spends a lot of time thinking about who could beat Trump in a debate. After seeing Biden speak a few weeks before, he isn’t sure about Biden’s chances.

“Frankly, he looked a little tired to me,” Heitzman said. “I don’t know that he’s too old for the job. I just got a sense that he’s slowing down a little bit, and I love Joe Biden.”

During a press gaggle Tuesday, Biden brushed off questions about his age, saying it was a “ridiculous assertion.” “But look, people have a right to question all of our ages. That’s a totally legitimate thing,” he added. “Watch me. Just watch me.”

Lynne Werner, a 77-year-old who was also at the Harris event, isn’t sure who she’s going to vote for in 2020. First and foremost, she wants someone who can defeat Trump. But like Heitzman, she isn’t convinced that is Biden right now.

“I think that right now, it seems that way. But I’m not sure,” she said. “I find in him right now an innocence, an old-world innocence.”

“He’s a nice guy,” she added. “And I wish that I could just sit back and pretend that the world is that.”