Dawn Wells, the actress who went on a fictional "three-hour tour" in 1964 and found lifelong fame as the bubbly girl-next-door Mary Ann Summers on the TV sitcom "Gilligan’s Island," died Wednesday of complications from COVID-19 — one of more than 341,000 Americans to die in the pandemic.

Unfortunately, Wells’ life that ended at age 82 was not as neat and tidy as the television show about tour boat passengers shipwrecked in a storm on a deserted island somewhere in the Pacific. We all have our storms in life, of course. And in real life, none of us have all our problem resolved every 30 minutes once each week. Wells was no exception.

On TV, Mary Ann miraculously managed to not only survive but thrive during three years of shenanigans on the island. She made it through misadventures with her hapless fellow castaways, navigating floods, volcanoes and even the arrival of uninvited visitors. Implausibly, the stranded group managed to find all sorts of ways to cope with the challenges they faced but never figured out how to build a boat that would enable them to leave.

Sadly, Wells spent her twilight years navigating a myriad of personal challenges, including a fall that left her financially destitute and desperate for rescue once again.

In the end, her saviors were her devoted fans, raising $197,000 to help lift her from the brink of bankruptcy via a month-long GoFundMe campaign. 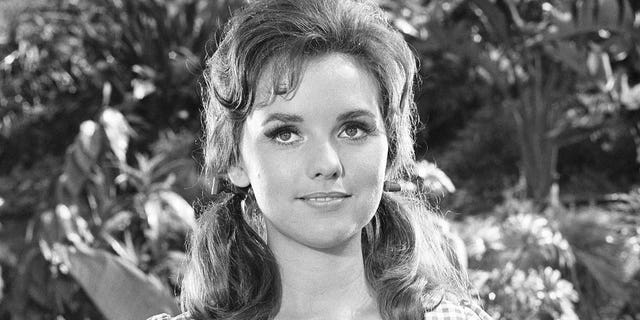 Dawn Wells as her character Mary Ann on the TV show ‘Gilligan’s Island’ in 1964.
(Photo by CBS via Getty Images)

It seemed almost made for television — except Wells’ real life wasn’t fictional or fantastical. It was a testimony to her ability to resonate with viewers drawn to the kind and wholesome young woman she portrayed. In reruns that still air, she never grew old, and never left "Gilligan’s Island" after the show’s three years of new episodes ended.

Wells was born in Reno, Nev. on Oct. 18, 1938. She overcame the awkwardness of teenage years marked by acne, obesity, braces and bad knees from ballet to be selected as Miss Nevada in 1960 and compete for the Miss America crown.

Four years later Wells became America’s sweetheart after landing the role of a Kansas farm girl sailing aboard the ill-fated SS Minnow that was shipwrecked on "Gilligan’s Island."

The character’s simple goodness resonated with generations of viewers. 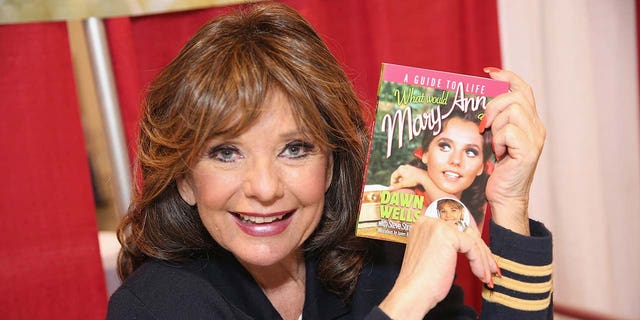 Dawn Wells in 2014, with her book ‘What Would Mary Ann Do? A Guide to Life,’ which she co-wrote with Steve Stinson.
(Getty Images)

Playing alongside an ensemble cast of stars, some of whom were already established in Hollywood, including Gilligan (Bob Denver), the Skipper (Alan Hale Jr.) and millionaire Thurston Howell III (Jim Backus), Wells’ character wasn’t even named in the first season’s opening theme song. If you listen to the litany of the show’s characters, you’ll hear the role of Mary Ann and the professor (Russell Johnson) simply referred to as "the rest."

But despite her credit anonymity, it didn’t take long for Wells to win hearts and fans in the series’ early shows.

"Every character on Gilligan's Island was given a broad 'stock' comedy role to fill — captain, mate, wealthy man, wealthy wife, professor, movie star — except me," Wells noted in her autobiography. "She was given a name and location — Kansas farm girl. I had to fill in the blanks. So, from the get-go, the Mary Ann character was different. She wasn't a Hollywood creation. She was molded by me, from me."

Contrasted against her female compatriot, the sultry and vivacious Ginger Grant (Tina Louise), Dawn Wells’ Mary Ann character was the wholesome alternative. She was the "good girl" who won friends and influenced people by her sweetness, not her seductive sexuality.

So-called "good girls" are often mocked in Hollywood and especially in sitcoms, lampooned as naïve simpletons. "Gilligan’s Island" wasn’t moralizing; it played to the sexual stereotype with Ginger. But I would contend Mary Ann’s legions of fans saw in her admirable qualities that parents want for their daughters, men want for their wives, and many girls want for themselves.

I’ll be honest. Ginger intimidated me as a kid watching "Gilligan’s Island" reruns. But Mary Ann? She was the kind of girl who I wanted to get to know. In fact, Mary Ann is the type of girl I wound up marrying. Julie Hamilton’s classic beauty immediately caught my attention, but it was her sweetness and kindness I truly fell in love with over 20 years ago. She was fun to be around — and still is.

Popular culture tends to glamorize the seductress, but marriages are held together by more than sexual chemistry. Men who find in their spouses the qualities the fictional Mary Ann Summers possessed are exponentially more likely to enjoy happier marriages.

It seems that Wells’ real-life persona matched her castaway character. In recent years the "Gilligan’s Island" co-star operated Wishing Wells Collections — a company she created to design and manufacture clothes for elderly people with physical handicaps.

In the end, it was Wells’ own persona, brought to her TV character, that caused so many fans to step up to help her when she found herself in need of rescuing in real life. The GoFundMe page gave Wells something Mary Ann never got — a boat to enable her to sail away from a bad situation.

"I am amazed at the kindness and affection I have received," Wells said at the time of her financial rescue. "I don't know how this happened. I thought I was taking all the proper steps to ensure my golden years. Now, here I am, no family, no husband, no kids and no money."

Sadly, bad things happen to good people, but good people like Dawn Wells tend to surround themselves with other people who are willing to help when tough times come — whether on a three-hour tour, a deserted island, or through a storm-tossed life.