In the 2018 midterm elections, several Democrats in Western states notched key wins after campaigning on the promise of protecting America’s public lands and maintaining federal control over resources. The victories were widely celebrated among conservation groups as a direct rebuke of President Donald Trump’s relentless push to strip protections and open land up to fossil fuel development.

In the nearly two years since, the Trump administration has continued its pro-industry agenda ― gutting conservation laws, rolling back protected sites and nominating an anti-federal land zealot to run the Bureau of Land Management. And with the November election just three months away, Trump allies up for reelection in Western states have, once again, found themselves the target of TV ads calling out their records and linking them to the president’s anti-conservation legacy.

“The issue has always loomed large, and this year more than any other it is front and center because of the actions of the Trump administration,” said Mike Saccone, an adviser to the National Wildlife Federation Action Fund.

On Thursday, Montana Gov. Steve Bullock (D) rolled out a six-figure ad buy knocking Sen. Steve Daines (R-Mont.), whom he is running to unseat in November, for previously indicating that he would vote to confirm William Perry Pendley as director of the Bureau of Land Management. A conservative lawyer with extreme anti-environmental views and a long history of advocating for the sale of federal lands in the West, Pendley is among Trump’s most controversial nominees.

“Twenty years ago, this man sued the state of Montana, trying to get rid of the public’s right to access our rivers and streams. I took him on in court and won,” Bullock says in the ad, referring to a failed lawsuit that Pendley’s former law firm, the right-wing Mountain States Legal Foundation, filed in 2000 challenging a state law that ensures recreational access to rivers and streams. Bullock defended the legal challenge as an attorney in the Montana attorney general’s office.

“Two decades later, Sen. Daines said the same guy who wants to sell off our public lands should be in charge of America’s public lands,” Bullock continues in the ad. “No senator from Montana should stand for that.”

In a November interview with E&E News, Daines said he would back Pendley, who has served as the bureau’s acting director since last July, thanks to a series of questionable ― some say illegal ― extensions by Interior Secretary David Bernhardt. Trump officially nominated Pendley for the director post in June.

Daines has since walked back his public support for Trump’s pick, telling the Bozeman Daily Chronicle last week that he has “serious concerns” and pledging to ask “very strong and direct questions” at his confirmation hearing, which has not yet been scheduled.

Daines has also found himself the target of a new $1 million ad campaign from the League of Conservation Voters Victory Fund. The ad, also released Thursday, highlights the senator’s 2015 vote in favor of an amendment to a Senate budget resolution that conservation groups argued was the first step toward the future sale or transfer of federal lands.

Daines’ office did not respond to HuffPost’s request for comment Friday. But in a statement to E&E News this week, Daines’ spokeswoman Julia Doyle dismissed the ads as “nothing more than a desperate attempt by Steve Bullock to distract from the fact that Steve Daines recently achieved the greatest win for our public lands — a win that no senator has been able to achieve for decades.”

Vulnerable Western Republicans have prioritized securing conservation wins ahead of the 2020 election.

Daines and Sen. Cory Gardner (R-Colo.), two of the most at risk of losing their seats, helped champion through Congress the Great American Outdoors Act, a major public lands package that directs billions toward fixing crumbling national park infrastructure and permanently funds the Land and Water Conservation Fund, a decades-old conservation program. Trump, who signed the bill into law earlier this month and is using it to greenwash his conservation record, has given full credit to Daines and Gardner ― neither of whom have particularly notable environmental records. Many see it as an election-year political stunt.

Gardner’s campaign has so far released three TV ads touting his work on the Great American Outdoors Act. In one, Gardner says that for five decades Congress “raided” LWCF to spend the money on “everything but the environment.”

“They’ll never be able to do that again,” he says, standing alongside a babbling stream.

But like Daines, Gardner is a new face in the decadeslong fight to secure full, permanent LWCF funding. While a member of the House of Representatives in 2011, Gardner voted in favor of an amendment to an appropriations bill that would have drastically cut the LWCF’s already low funding. In 2015, Daines voted against reauthorizing the program.

Gardner will face off in November against John Hickenlooper, the former Democratic governor of Colorado and 2020 presidential contender. Hickenlooper has run Facebook ads slamming Gardner for not signing on to the Colorado Outdoor Recreation and Economy Act, or CORE Act, which would protect approximately 400,000 acres of public land in the state. And in a recent Facebook video, Hickenlooper linked Gardner to Trump’s unprecedented rollback of public land protections ― he’s the only president in U.S. history to strip protections from more federal acres than he’s protected ― and challenged the incumbent senator to oppose Pendley’s nomination.

Saccone said that the Great American Outdoors Act is “a great win for conservation, but it doesn’t exist in a vacuum.”

“You can’t call yourself a conservation champion based on one bill alone,” he said. “Voters are smart.”

Gardner has so far avoided taking a stand on Trump’s controversial public lands chief. Meanwhile, he is running new Facebook ads touting his close relationship with Trump ― ads that have appeared nationwide with the exception of his home state of Colorado, as HuffPost reported.

A Key Issue Out West

Trump and his Republican allies in Congress may finally be waking up to just how unpopular their public lands agenda is among Western voters.

A 2019 Colorado College survey found that voters in eight western states strongly oppose Trump’s actions on public lands, including 60% disapproval for removing national monument protections. A 2017 poll by the Center for American Progress found that 64% of Trump voters oppose privatizing or selling off public lands. The Trump administration has maintained it opposes the sale and transfer of federal lands, even as it has repeatedly hosted key figures of the land transfer movement.

Along with his newfound support for the Land and Water Conservation Fund ― a program his administration tried for years to slash funding for ― Trump has taken to comparing himself to President Theodore Roosevelt, despite having a record that in no way matches up to that of the 26th president. While Roosevelt protected over 230 million acres of federal land, Trump has protected via executive action less than 37,000 acres while working to strip away protections for some 35 million acres, according to an analysis from the left-leaning Center for American Progress. 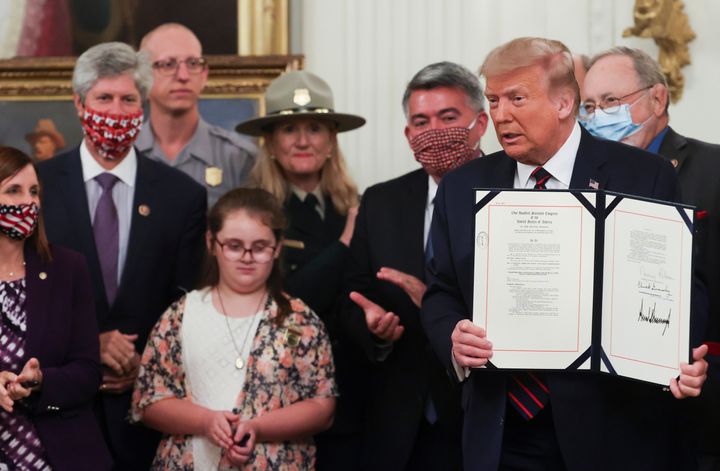 Public lands are also emerging as a key issue in the Montana gubernatorial race.

“Greg Gianforte doesn’t care about that,” John says. “In Washington, he wrote bills to strip protections from nearly 700,000 acres of public lands … He sued the state to take away your rights to access a popular fishing site just ’cause he didn’t like seeing regular folks near his giant mansion on the edge of the river.”

Along with drafting two bills in 2018 to roll back wilderness protections and filing a lawsuit in 2009 against the state to block river access on his property near Bozeman, Gianforte supports transferring control of federal lands to states. He voted for the Great American Outdoors Act, but did not sign on as a co-sponsor.

Cooney has attacked his opponent for his public lands record.

“I’ve used my time in elected office to expand protections for Montana’s public lands,” Cooney said during a July 23 press conference along the East Gallatin River, near the property where Gianforte tried to block stream access. “He’s used his to attempt to strip them away.”