Home » Politics » Sen. Sheldon Whitehouse defends ties to exclusive beach club after questions about whether it is all-white

Sen. Sheldon Whitehouse defends ties to exclusive beach club after questions about whether it is all-white 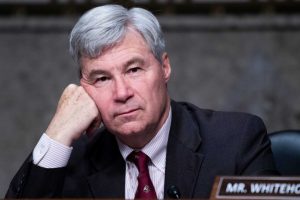 U.S. Sen. Sheldon Whitehouse, D-R.I., has defended his affiliation with an exclusive beach club after a reporter, describing the membership of the club as “all white,”  questioned him about it.

Whitehouse is a longtime member of Bailey’s Beach Club, formally known as the Spouting Rock Beach Association. The association is “an exclusive private beach club in Newport, Rhode Island,” according to its employment page.

After being questioned about his membership and the racial makeup of the club, Whitehouse on Friday told a reporter from GoLocal Providence, “I think the people who are running the place are still working on that,” referring to diversifying membership. “I’m sorry it hasn’t happened yet.”

USA TODAY reached out to Whitehouse’s office for comment but did not get a response.

Whitehouse spokesman Richard Davidson told the Washington Post Monday that the beach club has “‘no such restrictive policy’ regarding the race or ethnicity of its members.”

“The club has had and has members of color,” Davidson told the Post.

Whitehouse announced his intent to quit Bailey’s Beach Club while campaigning for senator in 2006, GoLocal reported, but the Rhode Island senator instead consolidated his membership with his wife. When asked in 2017 if he would pressure the club to open up membership, Whitehouse told GoLocal, “I’ll take that up privately.”

The Spouting Rock Beach Association declined to discuss the racial composition of its membership in response to requests for comments, The Washington Post reported. A representative described it only as a “very small beach club.”

On Monday, Whitehouse told reporters that Bailey’s Beach Club had told him it did have “diversity of membership,” Politico reported.

“I believe that there are (people of color who are members at the club),” Whitehouse told reporters, according to Politico. “I don’t spend a lot of time there.”