Home » Politics » Tapper on interviewing Biden: You don't have to steel yourself

Tapper on interviewing Biden: You don't have to steel yourself

New York (CNN Business)A version of this article first appeared in the “Reliable Sources” newsletter. You can sign up for free right here.

In the final minute of Jake Tapper’s sit-down with Joe Biden and Kamala Harris on Thursday, Harris put it all in perspective:
“There couldn’t be a more extreme exercise in stark contrast between the current occupant of the White House and the next occupant of the White House. And I do believe our country’s going to be the better for the outcome of this election, and the election of Joe Biden as president.”

The “stark contrast” is even more evident when Biden and Harris speak with the press. Thursday represented the pair’s first joint interview, and CNN aired it as a prime time special at 9pm ET.

Right after the interview, Tapper talked with 10pm host Don Lemon, who said “it feels like we are watching … a president-elect and a president who are on Earth One and Earth Two. And at this particular Earth that is in reality, it was very normal, very sedate. And it was welcoming news. It was good to watch. It was good to actually get content. We heard no fake news. We heard no conspiracy theories. We heard no personal grievances. We heard a President-Elect and a vice president who want to work with the other side.”
“No fake news:” That’s the yardstick now, since Trump routinely lies to his interviewers, even his super-fans like Maria Bartiromo.
Tapper told Lemon that a Biden interview is notably different than a Trump interview: With Biden, he said, “you don’t have to really steel yourself for the potential reaction when you bring up uncomfortable subjects,” as when Tapper asked about Biden’s family members, and about areas of disagreement between Biden and Harris.
“There just wasn’t the, you know, attack that we in the fourth estate have been used to. So that was unusual.”

Toward the end of the interview, Tapper said, “President Trump has not said whether he’s going to attend your inauguration yet. Do you think it’s important that he’s there?” Tapper pointed out that Biden chuckled during the question.
“I think it would — important only in one sense, not in a personal sense,” Biden said. “Important in the sense that we are able to demonstrate the end of this chaos that he’s created, that there is peaceful transfer of power with the competing parties standing there, shaking hands, and moving on. I think that’s important.”
In other words, Biden thinks it’s important for America. He thinks Trump should put “America First.” Right?

— In light of the multiple crises Biden is inheriting, Tapper asked, “what does it feel like… what’s the emotion that goes through you?” The first words out of Biden’s mouth were “I’m determined.”
— Regarding the Covid-19 crisis, Biden said he will ask Americans to wear masks for “one hundred days.”
— Harris on her working relationship with Biden: “We are full partners in this process.” 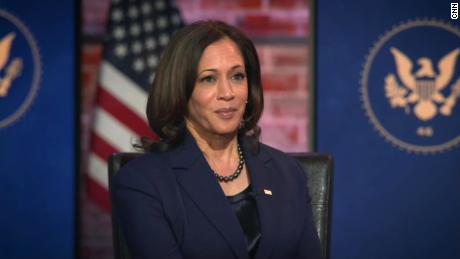 Kamala Harris: ‘I will be a full partner’ with Joe Biden

— Biden said Americans will not see “policy by tweets” once he takes office.
— Biden said he is reaching out, “not just to the communities that supported me, I’m going to reach out to those who didn’t support me. I mean, for real, because I think a lot of people are just scared and think they’ve been left behind and forgotten. We’re not going to forget anybody in this effort.” That gets back to the “stark contrast” Harris described.
Source: Read Full Article