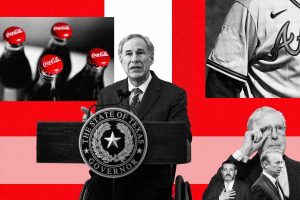 Georgia was one of the most reliable conservative strongholds in the nation before it voted for President Joe Biden last November and then, two months later, a pair of Democratic senators. The state’s still-very-Republican legislature has since been doing all it can to make sure this never happens again, and last month passed a restrictive new voting law aimed squarely at discouraging people from participating in democracy. People aren’t happy. Neither are a lot of pretty prominent corporations. Coca-Cola and Delta, both based with their corporate headquarters in Atlanta, have spoken out against the law, while Major League Baseball pulled its All-Star Game out of Atlanta.

Republicans are well aware that the more Americans whose voices are represented, the less of a chance they have to win elections. Most of their policy positions are deeply unpopular among the American public. The only way they can appeal to said public, then, is to drown out all of the pesky policy mumbo jumbo by cranking the culture war into overdrive. It’s why they lost their minds last month hammering the false idea that Democrats had “canceled” Dr. Seuss and Mr. Potato Head. This time, it’s Republicans who are doing the canceling in response to the backlash to Georgia’s voting law, and they’ve set their sights primarily on the MLB and Coca-Cola, which are right next to apple pie and fireworks on the Americana power rankings.

Let’s start with baseball. Republicans have spent the past week bashing the MLB for its decision to move the All-Star Game out of Atlanta, something they brought upon themselves by restricting voting access. Rep. Jeff Duncan (R-S.C.) announced he’s going to draft legislation to remove the league’s antitrust exception, setting off a Twitter chain in which Sens. Mike Lee (R-Utah) and Ted Cruz (R-Texas) agreed, with the latter labeling the league “woke.” Sen. Rand Paul (R-Ky.) even tried to equate access to the democratic process with access to ticketed baseball games. “If needing to show an ID to vote is racist, perhaps NY Yankees tickets that average over $100 are discriminatory?” he tweeted. “Will ‘woke’ @MLB mandate free tickets to to allow equal access?”

On Tuesday, Paul’s fellow Kentuckian in the Senate, Minority Leader Mitch McConnell, channeled his inner mob boss in warning corporations like the MLB, Coke, and Delta to stay out of politics. He made sure to clarify that he still wants their money.

But the most incensed among them may have been Texas Governor Greg Abbott, who not only refused to throw out the first pitch at the Texas Rangers’ home opener on Monday, but nixed the idea of Texas hosting the All-Star Game or any other Major League Baseball special events in the future. “It is shameful that America’s pastime is being influenced by partisan politics,” Abbott wrote, calling the idea that Georgia’s new voting law is aimed at decreasing turnout a “false narrative.”

Republicans have leaned on this “false narrative” argument because otherwise they’d have to admit that what is true is true, which is that they don’t want people to vote. This is pretty blatantly what the new Georgia law is trying to accomplish. It criminalizes offering food or water to people waiting in voting lines, which have become increasingly long as the GOP has closed polling sites. It allows unlimited challenges to a voter’s registration status, a move that has been used to racially profile and intimidate voters. It erects more barriers to voting by mail. It bans mobile voting sites. The list goes on.

Abbott’s message to Texas baseball fans is that throwing a cultural counterpunch against anyone who opposes these measures is more important than promoting a national pastime cherished by millions of his constituents. It worked out in the end, though. Instead of Abbott, who put up more resistance to instituting Covid-19 mitigation measures than just about any governor in America, the first pitch was thrown out by a teacher who lost family members to the virus. A health care worker served as the catcher.

Turning their backs on baseball might not be a great look for Republican lawmakers, but it doesn’t compare to the personal sacrifice some other conservatives are making in order to own the libs on the voting rights issue: willfully drinking Pepsi.

Coca-Cola, an iconic Southern institution if there ever was one, wasn’t a huge fan of the move to restrict voting, either. The company’s CEO, James Quincy, said last week that the bill is “a step backward” and “does not promote principles we have stood for in Georgia, around broad access to voting, around voter convenience, about ensuring election integrity.”

In response, a bunch of Georgia state lawmakers are now banning Coke products from their offices. A masterstroke.

Republican House Speaker David Ralston wasn’t among the signatories, but last week he reportedly made a spectacle out of cracking open a can of Pepsi in front of a bank of cameras. It was practically an act of heresy in state where “Coke” is so ubiquitous that the name is used to describe all soda, not just Coca-Cola.

It’s “not that bad, actually,” Ralston said later of Pepsi, admitting, however, that he couldn’t finish the entire can.

One Republican who isn’t much for making such concessions: former President Donald Trump. Despite famously using a call button to summon Diet Cokes to the Oval Office, Trump on Saturday called for a boycott of the company, along with Delta several others who spoke out against Georgia’s new voting restrictions. “Don’t go back to their products until they relent,” Trump wrote in a statement. “We can play the game better than them.”

But on Monday, Trump adviser Stephen Miller posted a photo of himself with the president, who appears to be attempting to hide a Coca-Cola product behind a phone on his desk.

“Do as a I say not as I do,” as it turns out, can refer to drinking soda just as much as it can refer to condoning extremist violence.

Notably absent from all of this is Rep. Matt Gaetz (R-Fla.), one of the the GOP’s most trollish culture warriors who surely would have added another layer of stupidity on the party’s war against the Georgia’s voting law’s corporate detractors. Unfortunately, Gaetz is busy contending with the news that he’s under investigation for sex trafficking a 17-year-old girl.