President Donald Trump used a taxpayer-funded speech at an energy conference in Pittsburgh Wednesday to blast Democrats carrying out an impeachment inquiry in the House — while touting his administration’s energy and manufacturing accomplishments.

Trump often waded into partisan territory, criticizing the “Do Nothing Democrats” as “a nasty group of people;” and repeating his recent admonition to Republicans: “We have to stick together.”

Notably, at this event or at opportunities earlier in the day, Trump did not directly attack his top diplomat in Ukraine, William Taylor. The diplomat’s explosive testimony to House impeachment investigators on Tuesday tied Trump to a quid pro quo of asking Ukraine’s president to commit to investigating former Vice President Joe Biden and his son in order to get U.S. military aid.

But Trump did put out harsh tweets referring to him as “Never Trumper Diplomat Bill Taylor” and then a second calling Never Trumper Republicans “human scum” as Air Force One arrived in Pittsburgh.

“The Never Trumper Republicans, though on respirators with not many left, are in certain ways worse and more dangerous for our Country than the Do Nothing Democrats. Watch out for them, they are human scum!” he tweeted. 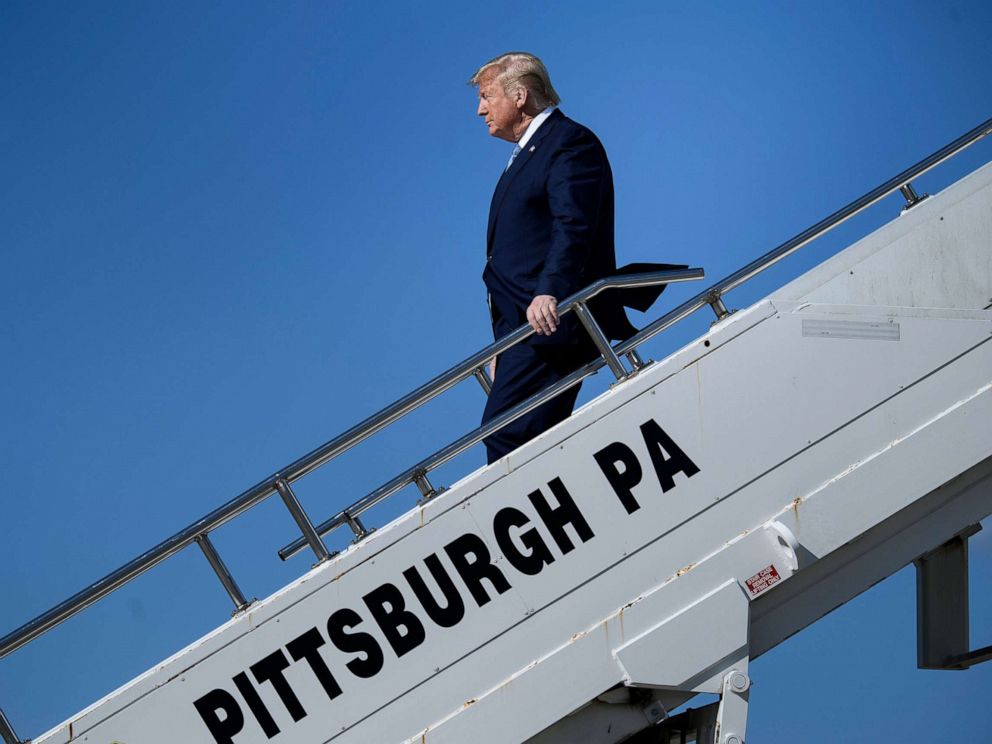 Earlier Wednesday, on Capitol Hill, about two dozen House Republicans grabbed headlines and diverted attention from the Taylor testimony by storming the secure House hearing room where Wednesday’s witness — a Pentagon official who knew about the withholding of the military aid — was to be deposed. Republicans once again claimed the closed-door process was unfair but Democrats said they were engaged in a desperate attempt to respond to Trump’s call for Republicans to get “tougher.”

One of the president’s staunchest allies in the impeachment fight — GOP Sen. Lindsey Graham — told reporters it’s time for the White House to get a more sophisticated impeachment pushback strategy — one like former President Bill Clinton had.

When asked if the White House needs to do a better job of messaging and coordinating with Republicans, Graham didn’t miss a beat, saying, “Yes!”

“They should have a team that speaks about this that’s trained in the law. Do what Clinton did: They had a communication strategy, and they governed.”

“I have witch hunts every week,” Trump said, at the Pittsburgh event, which Trump treated much like one of his campaign rallies. “I say, what’s the witch hunt this week?” He said it would be “unthinkable” what would happen to those in attendance if someone else won the presidency.

He lambasted the “fake news” and got supporters to boo when he blamed House Speaker Nancy Pelosi for not bringing forward a North American trade deal for a vote.

While attendees of the Shale Insights conference filled the front of the convention center hall where the president spoke, around a thousand members of the public — many wearing or holding Trump campaign gear — cheered from a standing room-only area in the back. “Make America Great Again” hats dotted the crowd. Several dozen people wearing hard hats and safety vests stood behind Trump on stage.

The dynamic was stark: As the crowd in the back loudly cheered, the conference attendees often remained silent.

Wednesday marked the second time in less than three months that Trump has visited the Pittsburgh area, an important region of a swing state he’s targeting in the 2020 election after winning it four years before — and close to another pivotal state he won, Ohio.

Trump on Wednesday touted his electoral victories in nearby Ohio and West Virginia.

He implored Republicans to back him as the inquiry pushed forward back in Washington and some Republicans, like. Sen. Mitt Romney, of Utah, have become increasingly vocal about their concerns over Trump’s behavior in office.

Trump said the Democrats “stick together better than the Republicans do.” “They don’t have a MItt Romney in their midst,” he said, adding to cheers, “We gotta stick together.”

In August, at a Shell plant outside Pittsburgh, Trump held another official, taxpayer-funded event where he told workers that Democrats wanted to wipe out coal, oil and natural gas; engaged in name-calling against Democratic presidential candidates; and at times sounded like he was leading a campaign rally.

Wednesday’s speech at the Shale Insight conference was an official event, too, and the president’s visit was funded by taxpayer dollars.

At one point, protesters mixed in with the crowd interrupted the president; their banners were taken from them and thrown to the ground, while Trump implored his supporters not to hurt them.

Earlier in the day, police arrested around a dozen people who blocked traffic outside the venue as part of a protest against white nationalism, according to the Pittsburgh Post-Gazette.

Trump’s speech Wednesday came three years after another appearance he made before the Shale Insights conference as a candidate. Then, he promised to remove regulations on the oil and gas industry, according to the Pittsburgh Post-Gazette.

Trump told the crowd Wednesday they were now a lot “happier” and “wealthier” than when he had come as a candidate.

When Trump finished speaking, a campaign rally staple blared over the loudspeakers: the Rolling Stones’ song “You Can’t Always Get What You Want.”