Australian researchers Clive Hamilton and Alex Joske have been banned from entering China, Chinese state media reported, less than two weeks after it was revealed Australia had revoked the visas of two Chinese academics.

The tit-for-tat response is the latest escalation in deteriorating relations between the two countries. Australian journalists Mike Smith and Bill Birtles left China at the beginning of September after being questioned by Chinese state security.

Four Chinese journalists left Australia after being questioned by ASIO in June and two Chinese scholars Chen Hong and Li Jianjun received negative security assessments and their visas were revoked by the Department of Home Affairs. 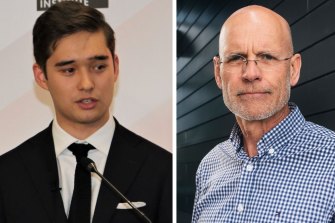 China's international state media outlet The Global Times reported on Thursday afternoon that Hamilton and Joske had been prohibited from entering under the country's Exit and Entry Administration Law.

Both experts have focussed their work on the Chinese Communist Party's rising influence abroad through the United Front network. Neither had plans to enter China.

He has urged governments to "disrupt the CCP’s capacity" to use United Front figures as vehicles for covert influence and technology transfer.

Hamilton, a professor at Charles Sturt University, was a key advocate for the foreign interference laws introduced by the Turnbull government in 2018.

The laws were widely seen as targeted at Beijing after years of subversive influence through political donations and stacking of Chinese community groups.

Hamilton has been pushing governments around the world to adopt Australia's more assertive position on China, warning it was time for a China reset "before it is too late" and has been highly critical of Victoria's Belt and Road deal with Beijing.

Professors Chen and Li, the Chinese academics who had their visas revoked by Home Affairs, have rallied against the decision by the Australian government.

Chen has written extensively for The Global Times, criticising Australia's foreign policy position and accusing the government of "maliciously exploiting" China's role in the coronavirus pandemic, after an earlier career as an Australian literary scholar.

"Any close and serious reading of my articles would easily reveal that my intention has been to eliminate misunderstanding, promote better understanding and improve the relationship," he said.

Li is a director of the Australian Studies Centre at Beijing Foreign Studies University, specialising in the translation of Australian literature in China between 1950-1965 including authors Frank Hardy, Jack Lindsay and Dymphna Cusac.

"I have never been and will never be a direct or indirect risk to Australia’s security, or indeed any country’s security," he said on September 10.

Deutsche Bank posts a surprise bounce back to profit with 3rd-quarter earnings, driven by 47% jump in debt-trading