Nigel Farage could become the ‘man who threw away Brexit’, a senor Tory Brexiteer has warned.

Steve Baker, chairman of the Eurosceptic European Research Group (ERG), said the Brexit Party leader could end up creating a ‘weak and indecisive’ hung Parliament if he fields 600 at the general election next month.

Yesterday Mr Farage dramatically revealed he will not stand as an MP at the snap election – but warned the Brexit Party will fight the Tories in key seats.

He said he had agonised over the decision but wanted to focus on supporting candidates up and down the country.

But Mr Baker accused the MEP and former Ukip leader of not being ‘serious about governing the country’, according to the Telegraph.

He also said his fellow Brexiteer was ‘wrong’ to characterise Boris Johnson’s deal as ‘not Brexit’, adding it was ‘a path to a great future’. 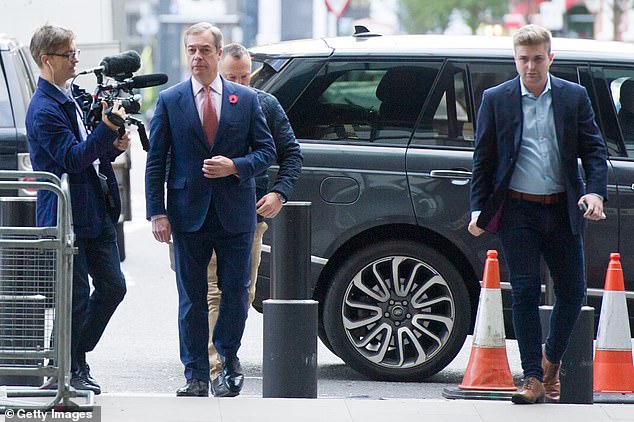 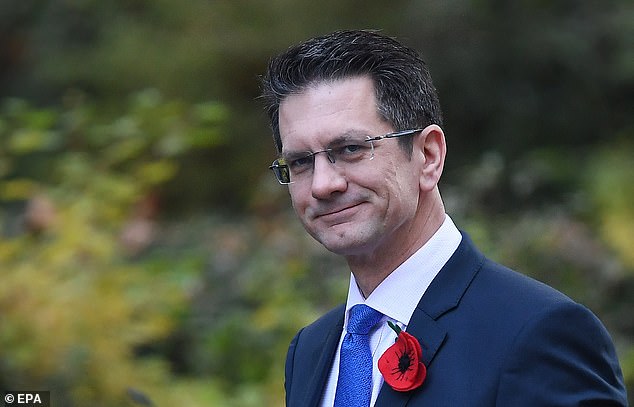 Chairman of the European Research Group Steve Baker arrives at 10 Downing Street last week. He criticised Farage for not standing in the election next month

And Mr Baker warned ‘we will not succeed if Nigel Farage creates a hung parliament by dogmatically pursuing purity’.

Mr Farage’s announcement that he will not stand in the December election came in an interview on the BBC’s Andrew Marr show, as the MEP launched an excoriating attack on Boris Johnson’s deal with the EU.

Despite a bitter rift emerging with his own closest allies, Mr Farage branded the package a ‘Remainer’s Brexit’ and a ‘massive con’, saying it was ’95 per cent the same’ as Theresa May’s.

‘I have thought very hard about this, how do I support the cause of Brexit best… do I fight a seat, try to get myself into Parliament, or do I serve the cause traversing the length and breadth of the UK, supporting 600 candidates,’ he said.

‘I’ve decided the latter course is the right one.’

Senior Tory sources told MailOnline it was clear the ‘party is turning on him’ – with Mr Farage’s old ally Arron Banks among those now urging voters to back Mr Johnson’s deal.

The former Ukip donor accused Mr Farage of being a ‘dog in the manger’ about Mr Johnson’s deal, saying his intention to field so many candidates was the ‘wrong thing to do’.

There are fears that if Mr Farage fiercely contests hundreds of seats across the country on December 12 it could destroy Boris Johnson’s chances of winning a working majority.

Mr Johnson again flatly ruled out an election alliance with the Brexit Party today, saying the only way of securing a break from the EU was to back the Tories.

There was a boost for the PM this morning as a series of polls suggested Brexit Party support had dipped below 10 per cent. 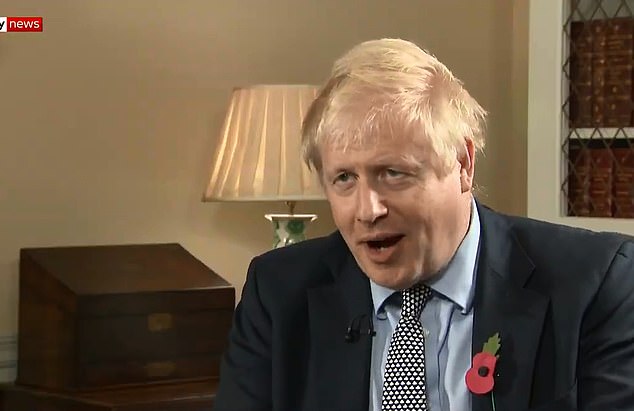 Boris Johnson again flatly ruled out an election alliance with the Brexit Party today, saying the only way of securing a break from the EU was to back the Tories 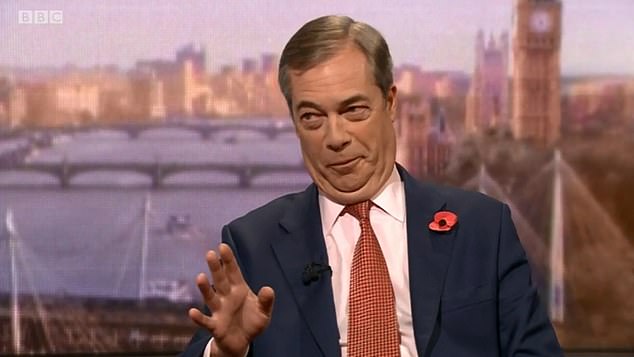 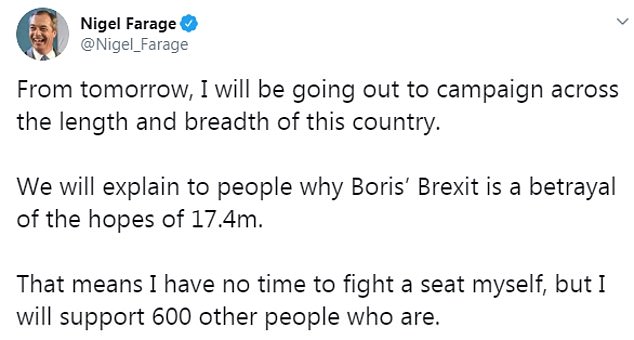 There had been speculation Mr Farage – who has tried and failed seven times to get into Parliament – would stand in Thurrock this time.

The seat was a target for Mr Farage’s former party Ukip in 2017 after Tim Aker was within 1,000 votes of Tory Jackie Doyle-Price in 2015.

At the EU referendum, 72.3 per cent of people cast their ballots in favour of Leave, the second highest proportion among the East of England’s 47 voting areas.

Boris Johnson has insisted he will never grant a second Scottish independence referendum – amid fears Jeremy Corbyn has done a back room deal with Nicola Sturgeon to sneak into power.

The Prime Minister said the 2014 ballot – when Scots voted to stay in the union – was a ‘once in a generation’ decision.

Pressed on whether he would authorise a second referendum, he replied: ‘No, I don’t want to have one. I don’t see any reason to go back on that assurance.’

The defiant retort, in an interview on Sky News’ Ridge on Sunday, comes as the SNP ramps up its demands for another vote north of the border.

To make the result binding the Scottish government would need approval from Westminster. However, Mr Corbyn has made clear Labour will not ‘stand in the way’ of a referendum, which Ms Sturgeon has insisted will be a red line for propping up a minority Labour administration after December 12.

But Mr Farage finally quashed the idea this morning – while insisting that it did not mean he was backing down from the fight with the Tories.

‘I always thought that to win an election, get a big majority so we can get a proper Brexit, a coming-together would be the objective.

‘I still hope and pray it happens but it doesn’t look like it will.’

The Brexit Party leader went on: ‘If Boris is determined to stick to this new EU treaty, then that is not Brexit.

‘I promise you one thing: if Boris was going for a genuine Brexit, then we wouldn’t need to fight him in this election.’

‘I campaigned for Leave, I spent a lot of time talking to my constituents and others across the North East and in Yorkshire – what do they want from Brexit?’ he said.

‘These are all things the Prime Minister’s deal deliver.

‘What I would say to Nigel Farage is, sometimes in politics, as in life, you’ve got to take yes for an answer.’

Tory chairman James Cleverly said: ‘Nigel Farage has already admitted that a vote for the Brexit Party risks letting Corbyn in through the backdoor creating another gridlocked hung Parliament that doesn’t work.

‘Scores of his supporters have already called for him to back Boris’ Great New Deal as, just like us, they want to get Brexit done and let the country move on.

‘We can then focus on the people’s priorities – investing in our NHS, tackling violent crime, and cutting the cost of living’

In a separate interview, Mr Farage claimed he has been offered a peerage by the Tories to pull back from the bring of splitting the Eurosceptic vote on December 12,

The Brexit Party leader told the Sunday Times elevation to the Lords was one of a number of ‘baubles’ put on the table by the Conservatives.

He said: ‘That happened twice, but we are going back a couple of months.

‘They thought the deal was that if I accepted that, we would only fight a few seats.

‘That came from two very close sources one from an adviser and one a minister, not a member of the cabinet, suggesting this was the right thing to do. I said I was not interested.’

Mr Farage also claimed one of his ‘very close colleagues’ – thought to be Brexit Party chairman Richard Tice – had been offered a safe Tory seat to defect.

‘One of my very close colleagues was offered one of the safest Conservative seats in the country yesterday morning. A very senior figure. They rejected it outright. It was a shire counties seat,’ Mr Farage said, 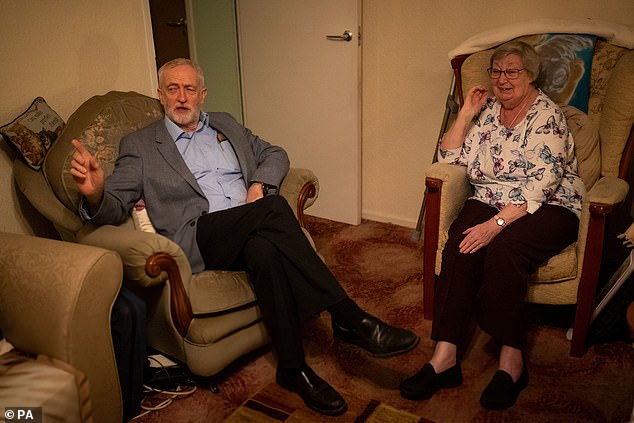