London: France has shelved a new tax on digital giants like Facebook and Google in a strategic backdown that will avert a showdown that threatened to spiral into a major trade war with the United States.

However, the United Kingdom will push ahead with a similar plan, prompting a blunt threat of retaliation from the White House on the sidelines of the World Economic Forum in Switzerland. 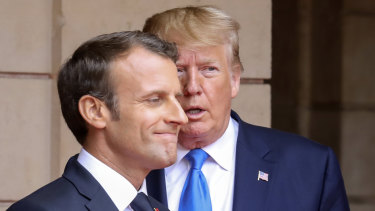 The relationship between French President Emmanuel Macron and US President Donald Trump soured over the digital tax. Credit:Ludovic Marin

France had wanted to slap a 3 per cent levy on firms with an annual revenue of more than €25 million in France and €750 million worldwide in a bid to prevent Google, Apple, Facebook and Amazon from shifting profits between countries to avoid taxes.

The targeting of Silicon Valley firms infuriated US President Donald Trump and soured his relationship with French President Emmanuel Macron. The White House threatened to retaliate with US$2.4 billion of new tariffs on French champagne, cheese, beauty products and designer handbags and vowed to go even further if the tax wasn't pulled.

During a phone call on Sunday, Trump and Macron agreed collection of the tax would be delayed until the end of 2020 and a French minister on Tuesday confirmed both leaders had agreed to "avoid all escalation between the US and France on this digital tax issue."

Australia had floated a similar proposal to France but decided the smarter option was to focus on implementing a digital tax under the cover of a potential global agreement through the Organisation for Economic Co-operation and Development (OECD).

Google earned $4.3 billion from Australians for services in 2018 but paid only $26.5 million in tax after its local arm reported a profit of $129 million.

If the OECD strikes a deal this year it is likely Australia and France will sign up to it. However if no agreement can be found, Paris will forge ahead with its original plan and the Morrison government may have to decide whether to do the same.

In contrast, Prime Minister Boris Johnson's government is pushing forward with a UK digital tax – a key plank of its election manifesto – despite angry threats from Washington.

US Treasury Secretary Steven Mnuchin warned London could expect similar treatment to that handed out to France if it pursued its go-it-alone approach by April 2020 as expected.

"If not, they’ll find themselves faced with President Trump's tariffs," Mnuchin said. "We'll be having similar conversations with them."

"We've committed to introduce our digital services tax from April 2020. It will be repealed once a global solution is in place."

Facebook is largely supporting the OECD push to tax multinationals with a global turnover of more than $1.23 billion because it is wary of the implications of navigating individual systems in multiple countries.

However an international agreement is far from guaranteed and may have to be less ambitious than some world leaders would prefer to get a deal over the line.

France attempted to impose its tax unilaterally and retroactively after Macron's push to have the regime apply across the European Union failed.