Home » World News » How to beat the crowds when visiting London

How to beat the crowds when visiting London

The gigantic queue outside the Natural History Museum in London’s South Kensington was so overwhelming, I just had to video it. It had at least 2000 people, snaking around the forecourt like a giant serpent before spilling onto the footpath outside, where tourist buses were disgorging still more punters. No, this wasn’t during the height of the European summer but one of the heady days between Christmas and New Year just past, when a mixture of school holidays, tourists pouring in for the spectacular New Year’s Eve fireworks, and the fact many of the city’s museums are free, turned parts of the British capital into a perpetual crowd-fest. 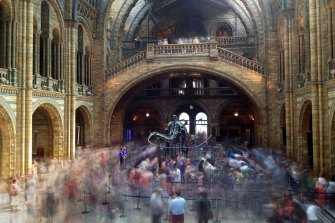 We decided to skip the National History Museum, a jaw-dropping Romanesque pile of terracotta and stained glass, and spend the afternoon at bohemian Camden Town, with its collection of indie boutiques, vintage shops and cool cafes, which my 16-year-old son awarded the ultimate stamp of approval. “This,” he said, looking around impressed, “is sick.”

Ah, London, epicentre of pop culture and high culture, still swinging after all these years, a city whose architectural and historical treasures – Buckingham Palace, the Tower of London, Westminster Abbey – can in the summer months resemble amusement parks, teeming as they are with selfie-posing, gelato-licking, trinket-buying swarms.

Last year, Britain clocked up an astonishing 38 million visits, according to its national tourism agency, VisitBritain, with inbound spending topping £25 billion in the 12 months to October 2019. And – notwithstanding the troubling threat of coronavirus – tourist numbers are set to continue soaring, as a result of the burgeoning middle class in China and India, the explosion of cheap flights and the booming cruise ship industry. Research by McKinsey has predicted that, by 2022, China’s middle class could number 550 million – many of whom will become keen travellers.

Cities such as Venice, Barcelona and Amsterdam have already introduced curbs on tourism (fewer cruise ships, no new hotels, caps on visitor numbers to monuments) because sightseeing hordes are diminishing the quality of life for locals, driving up rents and property prices, spreading noise pollution and litter, and turning their national icons into tourist-only zones. (Others have been cashing in: Airbnb, which launched in 2008, has proven a huge moneyspinner for those owning property.)

Some people are unfazed by crowds and queues – indeed, some relish the buzz from it – but if you’re like me and prefer more relaxed vibes when you’re appreciating the whispering gallery inside St Paul’s, Sir Christopher Wren’s masterpiece, it’s best to visit either first thing in the morning or late in the afternoon, even in the quieter months (about 7000 tourists can pass through the church on a busy summer day).

Timing is everything when you’re visiting a hurried, international city like London, so if you’re into museums and galleries, and don’t mind grey skies and a bit of drizzle, the winter months can be a more relaxing time to visit, barring those days between Christmas and New Year. When we returned to London in early January, we were able to walk straight into the Natural History Museum and the Victoria & Albert Museum without any queues.

For our first leg of the holiday, we stayed in Marylebone (pronounced mar-le-bone), a well-to-do, stately residential area of black and white Georgian terraces and multi-storied Edwardian apartments. In Marylebone – as in most parts of inner London pockmarked by shells during World War II – rows of grand, Victorian buildings are marred by brutalist glass-and-steel blocks erected between 1945 and the late 1970s.

Most of the latter are not ageing well. The main shopping strip is Marylebone High Street, lined with upmarket clothing shops and restaurants; within easy walking distance is the busier Oxford Street, which boasts the glossy Selfridges department store. It’s a quiet, peaceful and mellow area to stay, and perfect for strolling.

On our second stint in London, before we flew back to Australia, we stayed in Soho, near the heart of London’s theatre-land, with its lively nightlife and heavy pedestrian traffic. It gave us another side of (admittedly upmarket) London, within easy walking distance of Leicester Square (the Christmas markets are not to be missed), Piccadilly Circus and Soho Square. But there aren’t many places in London where the city’s architecture, history, culture and its iconic style aren’t proudly on show. 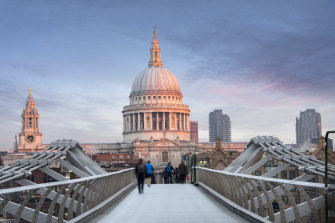 As 7000 tourists can pass through St Paul’s Cathedral on a busy summer’s day, timing your visit is everything.Credit:Getty Images

The Tube
The London Underground is one of the easiest public transport services to navigate in the Western world (especially compared to the Paris Metro and New York subway, both of which can be mystifying). Most visitors can only manage two major tourist attractions a day, so it’s quicker (and far more economical) to use the Tube rather than a taxi or the red tourist buses to get about.

Citymapper
This app now incorporates a travel pass card, so you can tap on and off. Citymapper offers options of how to get from A to B, and lists disrupted services before you head out. If you screen-grab directions before travelling, you’ll be well equipped to navigate the maze of subterranean tunnels once you lose your connection.

Free things
While London is expensive, most of the major museums and galleries are free, and the city is dotted with many beautiful, strollable parks like Kensington Gardens. There are also fantastic views from places like the sixth-floor roof terrace of One New Change shopping centre opposite St Paul’s, and of Trafalgar Square from the dining room of the National Gallery.

To read more from Good Weekend magazine, visit our page at The Sydney Morning Herald, The Age and Brisbane Times.