Srinagar: India has banned more than 100 Chinese phone apps as tensions continue to escalate along its disputed border with China, with one Indian soldier reportedly killed earlier this week by a Chinese land mine.

The Indian government has blocked 118 apps from its huge domestic market as a way to strike back against China. The new measures will prevent Indians from gaining easy access to the apps, including the popular video game PlayerUnknown's Battlegrounds (known as PUBG), which has more than 50 million players in India. 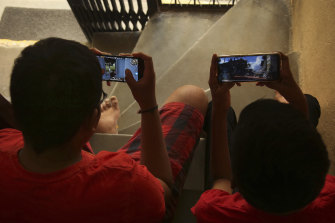 Indian children play online game PUBG on their mobile phones sitting on stairs outside their house in Hyderabad, India. Credit:AP

Some banned apps, including Baidu, Alipay and some versions of the messaging app WeChat, are operated by the largest Chinese internet companies, like Tencent and Ant Financial. Many of these companies see India as an avenue of growth.

"This decision is a targeted move to ensure safety, security and sovereignty of Indian cyberspace," said a statement issued by India's Ministry of Electronics and Information Technology.

China and India have been locked in a bitter border dispute for months — though the roots of the conflict go back decades — and tensions sharply rose in June, after Chinese forces beat 20 Indian soldiers to death in a brawl in disputed territory in the Galwan Valley.

Both countries have pushed thousands of reinforcements towards the frontier, which winds nearly 3400 kilometres through the Himalayas and other mountain ranges. The troops are supported with tanks, artillery, helicopters and fighter jets. 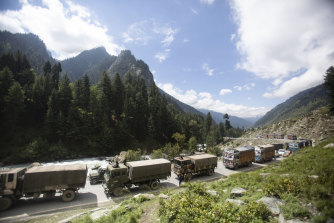 An Indian army convoy moves on the Srinagar-Ladakh highway at Gagangeer, north-east of Srinagar, Indian-controlled Kashmir.Credit:AP

After the clashes in June, which involved hundreds of soldiers battling each other with rocks, sticks, clubs and bare fists, India banned 59 mobile apps including TikTok, ShareIt and Tencent's WeChat, citing security concerns.

At the same time, a wave of anti-China sentiment swept across the country, with Indians taking to the streets in some places and crushing Chinese-made televisions and other goods, and calling for a boycott of Chinese products to show their anger.

The government said it had received complaints that Indian users' personal data had been stolen by the apps.

The government did not link the ban to the recent killing of an Indian soldier along the border. While the death has been widely reported in Indian news media, the government has provided no details of what happened, or even confirmed that it lost a soldier.

According to some military officers, the soldier was a member of a secretive force of exiled Tibetans in India who are deployed for high-altitude warfare.

Ajai Shukla, a retired Indian army colonel and defence analyst, wrote on his blog that on Tuesday, an Indian army officer handed over the soldier's body to his wife, telling her the circumstances of his death had to remain secret.

It's not clear if the soldier's death, attributed in news reports to a land mine, is connected to a stand-off that took place earlier this week on the shores of Pangong Lake along the border, which is known as the Line of Actual Control. Troops from both sides yelled at each other and surged to within a metre or two of each other before commanding officers pulled them apart.

Anurag Srivastava, a spokesman for India's ministry of external affairs, said in a statement that the Indian government had taken up the recent "provocative" actions with the Chinese side through diplomatic and military channels.

Many Indian parents who have been trying to wrench their children off video games said they supported the government's ban on PUBG. One parent even blamed the game for his son's death.

Harun Rashid Qureshi, a shopkeeper in the southern Indian state of Andhra Pradesh, said his 16-year-old son was so addicted to the game that he played for days at a stretch. 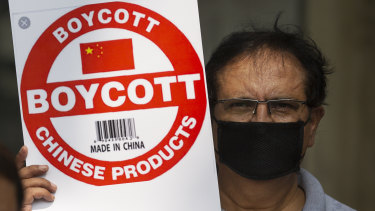 The Indian government invoked concerns on privacy and national security to block a further 118 mobile apps originating in China. Indian residents of border regions have also called for a boycott of Chinese products.Credit:AP

After one such stretch a few weeks ago, the boy became dehydrated and his family said he collapsed at home. He died hours later, a death that was widely covered in the Indian media.

"This game took his life," Qureshi said. "The ban will save the children of others."