DIY shop darling who taught us the true spirit of Christmas: Meet the four generations of this year’s surprise Christmas hit advert – made by its little star’s dad for £100 to promote the family hardware store

Things have been busy at Hafod Hardware recently. With Christmas around the corner, people are stocking up at this handsome traditional store in the heart of mid-Wales, as well as buying stocking-fillers — a calendar here, a decorative jug there.

In that sense it’s business as usual — that is, apart from the endless trill of the shop telephone. ‘It’s been ringing non-stop for the last couple of days,’ says Pauline Lewis, Hafod’s owner of 20 years’ standing, together with husband Alan and grandson Tom.

‘We’ve had calls from all over and someone sent me a message last night from Morocco saying how much they loved our Christmas advert and how touched they were by it. It’s lovely, really.’ 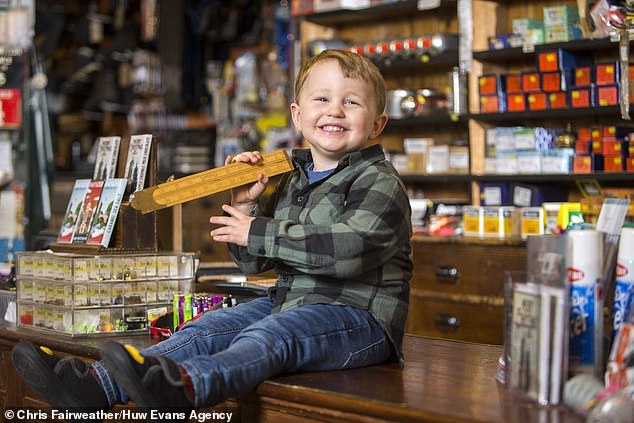 It certainly is — for the ad in question is a million miles from the swishy and expensive festive offerings that usually get people talking, be it John Lewis’s animated festive dragon or Marks & Spencer’s panoply of snappily dressed jumper-wearers.

Hafod Hardware’s is a far humbler affair: a two-minute home-made video filmed with a £100 budget and uploaded onto social media less than a week ago.

Despite that inauspicious start, as of this weekend, it had garnered more than a million views and counting.

Because what the film lacked in financing it more than makes up for in fatherly love and creativity — an altogether winning recipe that has captured the hearts of the British public, and those of the world, too.

An undeniably charming effort, it features a winsome and adorable two-year-old called Arthur — Pauline’s great-grandson and Tom’s son — who takes on the role of shopkeeper. 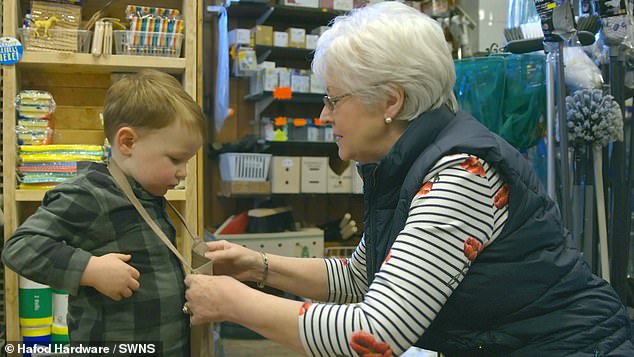 Arthur Jones, two, with his great-grandmother Pauline Lewis, 76. As of this weekend the advert had garnered more than a million views and counting

Against a backdrop of Alphaville’s song Forever Young, we see Arthur waking up and heading to work where, donning an apron, he sweeps floors, stocks shelves, serves a series of customers and makes his charming best effort to gift-wrap purchases.

As the store closes he bends to pick up a Christmas tree — before the camera sees him morph into his dad Tom Lewis-Jones, 30, who carries the tree home as the slogan appears: ‘Be a kid this Christmas.’

It’s about as far from a hard sell as you can get — and perhaps one reason why, in this era of frenzied consumerism, it has struck such a chord.

Then there’s the simple values it evokes — that of an honest day’s work and the joy of family. That’s what 76-year-old Pauline thinks anyway, pondering on the film’s unexpected success. 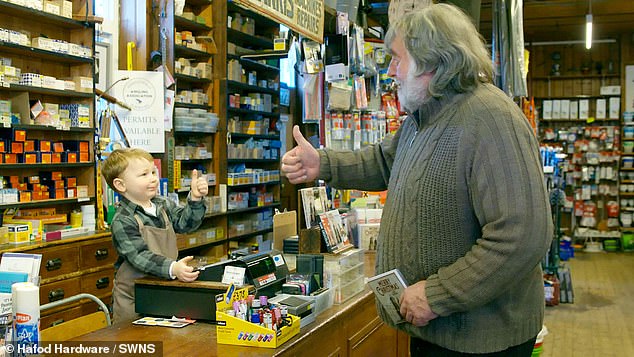 ‘I think people are so fed up with the news and the general situation,’ she says. ‘This speaks about different life values, nostalgia for a calmer, nicer way of life.’

‘It’s a simple story isn’t it?’ adds her grandson, Tom. ‘And it’s real — because we’re a real family. There’s four generations of my family here.’ For make no mistake: Hafod Hardware is a true family business in an era when the phrase sometimes feels like it’s at risk of becoming obsolete.

Save for a period of 17 years, the store, in the picturesque village of Rhayader in Powys — population 2,000 — has been in the family since 1895.

‘My father’s side of the family has lived in Rhayader for eight generations and it was my grandfather’s cousins who first took on the store in 1895,’ says Tom. 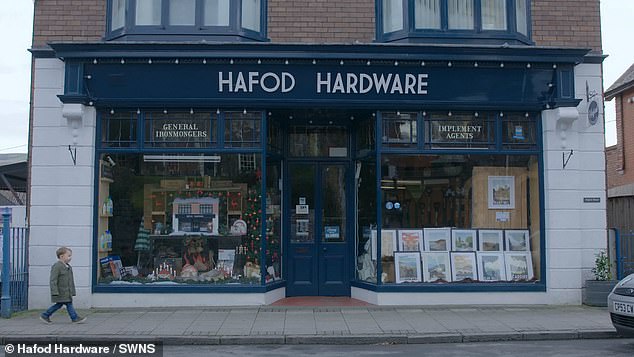 It remained in the family until the early 1980s, when it was sold to an unrelated young couple who ran it for 17 years — at which point Pauline and husband Alan, 82, decided to buy it back after years working in the hotel and pub business.

‘We bought it with a view to retirement — so that didn’t quite work out as planned!’ she laughs.

Their daughter Shelley — Tom’s mum — was also initially involved, but after she left to focus on other business interests, Tom, then 20, decided to step in.

‘He’d been to university for a while, wasn’t really sure what he wanted to do with himself and then found his calling,’ Pauline says with a twinkle.

Tom doesn’t disagree: a year into his art and photography degree at Newport University he decided being a ‘skint student’ was not his scene and returned to his hometown to pursue other options.

He formed a band, joined the local fire brigade and then decided to use his remaining hours to help out in his grandparents’ store.

‘It was meant to be a stop-gap really,’ he muses now. ‘I really wanted to make a living in the music business, but it didn’t work out. The band broke up, and I realised I liked working here. I liked the job, I liked working with people.’

By then he had also embarked on a relationship with his now 29-year-old accountant wife Laura. ‘We were at primary school together but then she’d gone off to university,’ he says. ‘She came back here afterwards. We got together, got married, then Arthur came along pretty quickly.’ 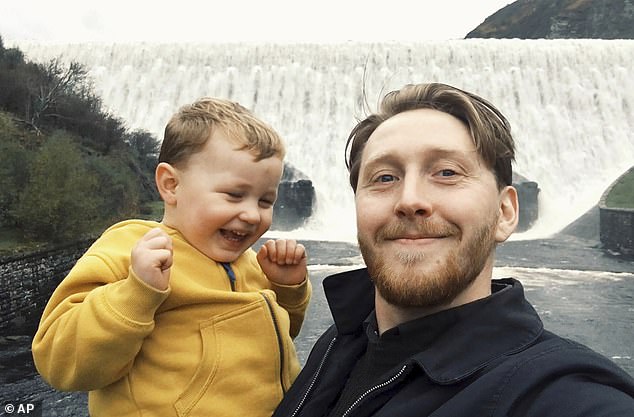 Right on cue the little chap in question tootles into view wielding a tape measure. He looks right at home, and indeed he is.

‘It’s like his second home here really,’ says Tom. ‘All the jobs you see him doing in the advert — well it’s nothing new to him. All this stuff is like his playground.’

Arthur even has his own little workbench bang in the middle of the shop, nestled alongside the neatly stacked pots, paints, cleaning products and buckets that are the hallmark of the traditional — but now increasingly rare — local hardware shop.

There’s innovation here too though, in the form of artisan tableware and Tom’s hand-produced prints of the Welsh countryside, which have pride of place in the window. ‘He’s really put his stamp on the business and dragged us into the 21st century,’ says Pauline.

Because as any independent retailer — indeed any small-business owner — will testify, these are difficult times.

Mammoth out-of-town shopping centres and the inexorable rise of web shopping have pushed people away from the high street, while spiralling business rates are another contentious issue.

Then there’s changing social mores. ‘The internet has taken over, but in the 20 years since we started here, we’ve seen a difference in the type of business we do,’ says Pauline.

‘The younger generation aren’t doing DIY like the older generation. They won’t mend or alter things, they buy new. So we have to provide other services to go with the products we sell.’

When I joined, internet shopping was just starting to kick off,’ agrees Tom. ‘We realised quite quickly that we would have to focus on the service we provided as that’s something you can’t get online.’

Cue key-cutting, locksmithing, free home delivery and even lightbulb-fitting: All added to Hafod Hardware’s menu. ‘There’s elderly people who don’t really have anyone and I am happy to help,’ says Tom. ‘We like to think we’re serving the town rather than just being another business.’

Still, it’s not easy, and Pauline admits that they have had to navigate some leaner times. ‘Three or four years ago things were very quiet although it has picked up a bit since then,’ she says.

And then there’s the hours — the shop is open six days a week. ‘Up until 12 months ago it was the three of us, but Alan’s health has not been so good recently so that leaves Tom and me,’ says Pauline.

‘But if one of us is off we just draft in other members of the family.’

That includes Arthur’s mum Laura, who does the books and is more than happy to step in behind the counter when needed.

There are, of course, countless others like the Lewis-Jones clan — hard-working families putting in the hours day-in, day-out, often for modest returns, and who form the all-too-often overlooked backbone of our country.

It’s doubtless yet another reason that their charming film has proved so popular.

Not that Tom was setting out to make a point — as his grandmother points out, he just has a vivid imagination and a creative streak. ‘It’s always been his strong suit,’ she says.

That imagination led to Tom’s first attempt at a festive advert two years ago, something he did ‘just for fun’ with best friend and keen amateur filmmaker Josh Holdaway. ‘Josh said: ‘Let’s do a Christmas ad’, and I thought: ‘Why not?’. I had a motorbike in the garage, so it was a case of pretending to be a modern-day Father Christmas doing his rounds,’ he reflects.

Arthur — then just a few months old — made a cameo at the end, emerging into the family living room to delightedly unwrap his presents. Tom uploaded his efforts onto YouTube in time for Christmas 2017 and it proved a modest hit, particularly after a local trade magazine gave it an award which brought it wider attention.

‘The main thing was that the community loved it, and at the end of the day that’s who we’re doing it for,’ he says.

The following year he made another film — this time recording himself using a camera on a tripod as Josh was abroad — which featured him beavering away in his workshop on a replica model of the Hafod Hardware store which now has pride of place in the window.

Once again Arthur makes a cameo, beaming delightedly alongside his mum at the shop- front unveiling.

So naturally, as Christmas 2019 loomed and Rhayader’s residents started to ask about this year’s offering, Tom knew he had to get his thinking cap on.

With a limited budget, Tom hit on the idea of getting his enthusiastic shadow to emulate his daily routine — something that required little in the way of direction.

It helps, of course, that Arthur is something of a natural in front of the camera. ‘Oh, he was a dream,’ says his father. ‘He’s a bright boy so we just pointed him in a few directions and off he went. I’m so proud of him.’

Of course, none of the family could have foreseen the ripples the advert would create: uploaded onto YouTube on Monday, it quickly caught the attention of the world.

The phone started ringing, one local popped in with a congratulatory bottle of champagne and the fan mail is starting to arrive too.

‘Thank you for reminding us of the true spirit of Christmas with your beautiful film which touched our hearts,’ reads one card sent by a couple in Cornwall and which is typical of the sentiments of most.

Little wonder Tom is struggling to take it all in. ‘I had no intention of it being this big,’ he says with a grin. ‘I just wanted to do something that would make the community smile.’

Still, it begs the question — what about next year?

‘I almost feel this could be the last one,’ says Tom. ‘It’s gone so big and global that it will be hard to top it . . . Although it’s about capturing my family and our memories — so the idea of not doing that would really make me think twice.’

The big department stores would do well to take note — their own festive offerings this year have been no match at all against the impish charms of a two-year-old scamp and his hard-working, loving family.

Week Two of RBI Vs. Crypto at the Supreme Court of India