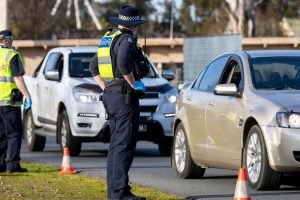 Victorian authorities are scrambling to identify new coronavirus exposure sites after a family of four brought COVID-19 back into the state after visiting NSW, and a group of furniture removalists made two deliveries in Melbourne while infected.

The leaking of cases into Victoria came as NSW’s outbreak continued to grow, with 112 new local cases on Monday and at least 46 of those cases were out and about in community for part or all of their infectious period.

Almost 10,000 NSW teachers and aged care workers in Sydney’s COVID-19 hotspots will have access to priority vaccinations from Friday.

As Victoria’s hard border with NSW and the ACT came into force, the Commonwealth and the NSW government were last night finalising a rescue package that would offer federal assistance to the businesses forced to close during the state’s lockdown. It followed NSW Premier Gladys Berejiklian’s warning that it was “almost impossible” to imagine Sydney’s lockdown ending as planned on Friday.

The assistance will include a cash flow boost to help businesses survive and be similar to the federal government payments, ranging from $20,000 to $100,000, offered to small and medium businesses in March to help pay staff and bills. While it will initially be offered to companies in the Greater Sydney area, it will be available on the same terms to employers in other regions, states and territories that suffer lockdowns that last for more than two weeks.

Victorian Deputy Premier James Merlino on Monday said while the additional assistance was a positive outcome for NSW, it was “disgraceful” that Victoria had to “fight hard to get the scraps that we did” during its fourth lockdown in May. Victoria offered almost $500 million in assistance for businesses last lockdown, but its initial requests for federal support for workers were refused, until the Commonwealth provided income support through the COVID-19 disaster payment, worth up to $500 per week and paid directly to individuals.

“Victorian businesses have great empathy and understanding for our neighbours over the border and would welcome federal government support to see them through this difficult time,” he said.

Victoria’s COVID-19 response commander Jeroen Weimar said the two positive cases announced on Monday were among a family of four in the City of Hume. Three members of the family flew into Melbourne from Sydney on July 4 on a red permit, meaning they were required to self-isolate for 14 days and get tested, while a fourth drove back to Melbourne on July 8.

Health authorities do not believe either the flight or Melbourne Airport is a risk because the three family members tested negative to the virus on July 6, two days after disembarking. The two showed symptoms on Saturday and subsequently returned a positive result on Monday morning.

Mr Weimar said the family, who had not been identified as close contacts of the Sydney outbreak, was helping authorities map their route to identify potential exposure sites.

Meanwhile, two removalists were confirmed to be positive after being in Melbourne for two days to deliver furniture in the City of Hume, in Melbourne’s north, and pick up another load in the City of Maribyrnong, in the north-west. Families were at home in both locations and are now isolating. The removalists later drove to South Australia before returning to NSW.

Test results from the two families are expected to be returned on Tuesday.

Mr Weimar said the public health team was concerned about the movements of the removalist crew, who stayed overnight in Victoria on July 8, but who had not yet provided accurate information to contact tracers on their movements.

When asked if he was concerned the men had not followed the rules, Mr Weimar said: “Absolutely”.

“The individual stories are not quite tying up at the moment,” he said.

Mr Weimar said NSW Health had contacted one of the removalists on July 9, when they were in South Australia, to identify them as a close contact of another case. Victoria’s public health team has been interviewing the trio, but Mr Weimar indicated the process had been “complex and challenging”.

Victorian health authorities on Monday night named a supermarket in Craigieburn, a petrol station in Broadmeadows and an apartment complex in Maribyrnong as new exposure sites.

Metro Petroleum at Broadmeadows was listed as a tier-2 site. Anyone there between 1.19pm and 2.04pm on July 11 should get tested and isolate until they receive a negative result.

The Ariele Apartments complex on Thomas Holmes Street in Maribyrnong has been listed as a tier-1 site between 1pm and midnight on July 8 and as a tier-2 site from July 9 to July 12.

Nine News reported late on Monday night that the apartment building had been placed into lockdown.

Two other Tier 1 sites were added late on Monday night – both in the Victorian town of Ballan about 80 kilometres north-west of Melbourne.

The first site is a Mobil service station on the Western Freeway on July 8, between 5pm and 7pm. The exposure site includes the shower and bathroom facilities.

The second site is a McDonald’s on the Western Freeway on the same date and at the same times as the service station. Anyone who was at these sites is asked to get tested immediately and isolate for 14 days.

Deakin University epidemiologist Catherine Bennett said that even if the removalists had infected either of the two families they visited, the “worst case” would mean they had been infectious for a couple of days in the community, “and we wouldn’t have more than one generation of spread, which we did before last month’s lockdown”.

“It’s still absolutely manageable even if the virus did stay with any of those family members after the drivers left,” she said.

Coupled with low vaccination rates and nationwide fatigue that made it harder for governments to enforce lockdowns and restrictions, Professor de Courten said states and territories had become a “sitting duck” for outbreaks.

“It’s the same with quarantine – there is always a risk and therefore it’s a matter of time until an event occurs. The only real protection is complete hard borders, where nobody leaves their city or even their house. As a free, functioning society we cannot do that,” he said.

Six fines have been issued for breaches of coronavirus restrictions in the past fortnight, including one to a man who had been in a NSW red zone and was not isolating.

On Monday, South Australian authorities announced that a 72-year-old woman died after contracting the rare blood-clotting disorder associated with the AstraZeneca vaccination. SA Premier Steven Marshall said the woman had received her first AstraZeneca vaccination on June 24 and was admitted to hospital on July 5 after becoming unwell.