London: Prince Charles has pleaded with world leaders and businesses to rapidly shift to a new economic model that revolutionises the interaction between nature and global financial markets and saves the planet from "approaching catastrophe".

In an unprecedented royal intrusion on government policy, the heir to the British throne used a landmark speech in Switzerland on Wednesday to argue market-based solutions and tax reform were the best options to halt the damaging impacts of climate change. 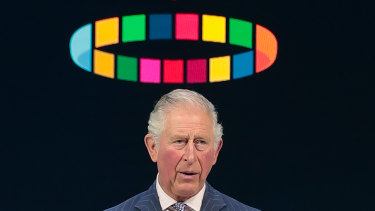 Prince Charles speaks at the World Economic Forum for the first time in 30 years.Credit:Bloomberg

He called for the urgent reversal of "perverse subsidies" enjoyed by the fossil fuel industry, reiterated his support for carbon pricing schemes, encouraged superannuation funds to invest in more green projects, and said humans and the planet must be put at "the heart of global value creation".

"Do we want to go down in history as the people who did nothing to bring the world back from the brink in time to restore the balance when we could have done?" the Prince of Wales told the World Economic Forum in Davos.

"What good is all the extra wealth in the world, gained from business-as-usual, if you can do nothing with it except watch it burn in catastrophic conditions?"

The 71-year-old has spent five decades speaking out on the environment but his Davos remarks are a rare criticism of the current global economic structure and his proposed solutions would have major implications for government policy, particularly in Australia.

He also met Greta Thunberg on the sidelines of the event and labelled the young climate campaigner – who has been repeatedly attacked by US President Donald Trump – "remarkable".

Outlining 10 ways to transform financial markets and reduce global emissions, Prince Charles said nothing short of a revolution was required.

"I've come to realise it is not a lack of capital holding us back but rather the way in which we deploy it. Therefore, to move forward we need nothing short of a paradigm shift – one that inspires action at revolutionary levels and pace."

He called for companies and countries to outline how they will move to net zero emissions – a signal he is not satisfied with the commitments made under the Paris climate accord. The United Kingdom has pledged to be carbon neutral by 2050 but Australia and other countries have been reluctant to make similar promises.

"It is time for businesses, industries and countries alike to design and implement how they will decarbonise and transition to net-zero," Prince Charles said. "A little competition in this area could go a long way." 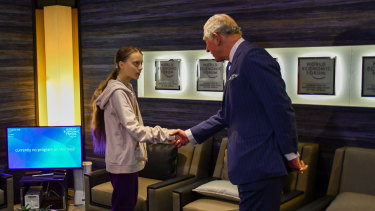 He said technology solutions to climate change were increasingly cheaper but worried there had been a breakdown in links between investors and potential investments. He also flagged the need to "reimagine" how investors analyse, structure and assess models of return.

"There are trillions of dollars in sovereign wealth funds, pension funds, insurance, and asset portfolios looking for investible and sustainable projects with good long-term value and rates of return," he said.

"It is time to align sustainable solutions with funding in a way that can transform the market place.

"If we valued our natural capital property, as I've been trying to say for quite a long time, our national and individual balance sheets might look very different indeed."

The Prince pledged to conduct a series of climate policy workshops throughout 2020 and suggested he could also attend key global summits throughout the year, including a major gathering of world leaders in Glasgow in November.